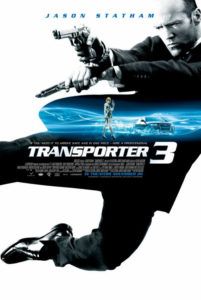 Transporter 3. Another action movie from French producer Luc Besson, himself once an accomplished filmmaker with titles like Léon: The Professional and The Fifth Element under his belt. Now he writes mishmash screenplays for lowbrow directors with all the speed and repetition of a motion picture assembly line. Along with writing partner Robert Mark Kamen, the duo spreads themselves thin, cranking out three or four films per year, none of them much good. Trouble is, they’re made with reasonably low budgets recouped on a combination of moderate box office and DVD sales, sending the illusion that they’re successful. Only in the financial respect. Jason Statham is Besson’s poster-boy: a B-movie action hero extraordinaire complete with buzzed head, surplus of martial arts abilities, and crusty Limey speech. Before retiring to direct-to-video crud and Sci-Fi Channel Originals, at which point, like the last decade of Jean-Claude Van Damme’s career, he’ll disappear for years and then suddenly pop up again, Statham will outstay his welcome. He’s just about there now (see Death Race or In the Name of the King: A Dungeon Siege Tale).

In his latest mindless actioner, Statham returns as Frank Martin, who has now retired from the badass driver-for-hire business to fish with his French detective friend and comic “relief” Tarconi (François Berléand). Suddenly Frank is duped into one more job by a ruthless criminal mastermind named—quite unimpressively I might add—Johnson (Robert Knepper). Euro-trash thugs by his side, Johnson blackmails environmental lobbyist Leonid Vasilev (Jeroen Krabbé) by kidnapping his daughter. Both she and Frank are ordered to drive across Europe, unable to escape because they’re wired by wristbands that limit their distance from Frank’s car: Johnson warns that they’ll explode when they reach seventy-five feet away from the car. (Question: If they’re in Europe, shouldn’t they be using the metric system?)

The package, Valentia (Natalya Rudakova ), presents the standard love interest—the annoying sexpot Frank first must ignore while pummeling thugs, but then later conquer in the back seat of his Audi, both tasks accomplished with his untamable manliness. She’s also one of the most annoying movie characters in recent memory. Speaking only in broken English by way of her thick Ukrainian accent, her Borat-tongue utters lines like “Want to make sex?” as if it were charming instead of just stupid. At one point, high on some party drug, Valentia begins to dance inside a convenience store while our hero fills up the gas tank. Since the restroom is out of the wristband’s range, she decides to urinate onto the floor while gyrating to music that isn’t there and giving Frank bedroom eyes. I think it was supposed to be sexy, but the audience in my screening universally cried “Ew!”

Action junkies might feel at home, as Frank kicks butt in the same manner he did before. But there’s nothing to drop the jaw. Nothing we haven’t seen in better movies starring the likes of Van Damme or Jackie Chan. Another fight in another mechanic’s shop features another sequence bound in homoeroticism, as Frank progressively strips down to beat down thugs with his clothes (though, there’s no quasi-mud wrestling in motor oil this time). Extravagant car stunts are rendered via sloppy CGI. And there’s train sequence that leaves the viewer shrugging, “Is that all there is?” Olivier Megaton may be the name of a Parisian supervillain. Or this film’s director. I can’t be sure. On the one hand, Megaton could soar fifty feet high, weigh a mega-ton, and threaten to destroy France’s countryside with each step. On the other, he might be who Luc Besson found to direct this dribble. I’ve learned from imdb.com that Megaton was born on August 6th, 1965, and named himself after his birthday’s unfortunate alignment with the 20th Anniversary of the Hiroshima A-bomb. Why anyone would want to celebrate such an occasion is beyond my comprehension.

Anyway, Megaton employs flicker transitions and random fluctuations in film speed. He’s seemingly incapable of showing us what’s happening. Hollywood’s terminal movement to purvey garbled action scenes makes me long for Michael Bay (something no critic should yearn for), who, despite his staccato editing, can at least communicate the events onscreen with some clarity. In my review of Transporter 2, I grumbled that outlandish stunts, including some wild scenes adverse to gravity, lessened the diversionary appeal of the franchise. While I am pleased to report that Transporter 3 avoids exploits worthy of Looney Tunes, the result plays like most action movies nowadays: Bright effects, dim story, flashy editing, and unintelligible violence. Add to this formula a script unworthy of kindergarten creative writing and the same old action sequences repeated with sleepy finesse, and this entry demands your dismissal.