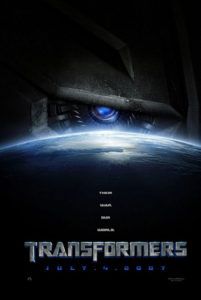 With every Bad Boys and Armageddon that comes along, Michael Bay shows the world what kind of expensive crap he’s capable of destroying. Often aligned with producer Jerry Bruckheimer, Bay’s career has spawned stinker after stinker, making the world wonder why he’s not shooting more Mountain Dew commercials. There’s no doubt in my mind that had Transformers been produced by the Bruckheimer-Bay duo, I would be writing a different, angrier review right now. But alas, Steven Spielberg, one of, if not the best mind working in blockbuster entertainment (he virtually invented the idea of the blockbuster, after all) produced Bay’s new movie. Perhaps Spielberg tempered Bay’s typical whooshing cameras and rapid-fire cuts, making them less abundant and the material more family friendly, because this is Bay’s best film to date.

At the very least, I can assure you it was Spielberg’s idea to cast rising star Shia LaBeouf as lead human Sam Witwicky, given that Spielberg produced LaBeouf’s success Disturbia earlier this year. Next year, LaBeouf is starring as Indy Jr. in the new Indiana Jones film, another Spielberg project. And what a perfect casting choice it was here. LaBeouf may not be a thespian, in fact, he’s probably just playing himself—that, or his characters in both Disturbia and Transformers are just coincidentally the same—but his charm never ceases to make us laugh. Comic relief moments are handled with quick delivery, LaBeouf’s mouth spouting insults and sarcasm so fast we can barely keep up. But it’s all very natural in his performance. As is his fear. Moments in which he runs from whatever robot pursues him seem heightened because LaBeof’s intensity is so convincing.

Based on the popular Hasbro toy line and cartoon from the 1980s, this nostalgia-driven film comes from a recent revival of 1980 franchises. Children from that era (myself included) are now adults willing to pay to see their favorite childhood heroes come to life on the big screen. The producers of Transformers even (wisely) found Peter Cullen, voice of Optimus Prime on the cartoon, to reprise his voice role for this movie. Any hesitant moments of prolonged nostalgic joy will explode in young viewers (particularly young males, Bay’s target audience) when Prime finally reveals himself, and his voice, to audiences. Maybe this means we’ll eventually get to see G.I. Joe, Thundercats, and Jem (it’s truly outrageous) hit the big screen in the coming years.

Based on the popular Hasbro toy line and cartoon from the 1980s, this nostalgia-driven film comes from a recent revival of 1980 franchises. Children from that era (myself included) are now adults willing to pay to see their favorite childhood heroes come to life on the big screen. The producers of Transformers even (wisely) found Peter Cullen, voice of Optimus Prime on the cartoon, to reprise his voice role for this movie. When Prime finally reveals himself, and his voice, to audiences, all of that prolonged nostalgic joy will explode in young viewers (particularly young males, Bay’s target audience). Maybe its inevitable success means we’ll eventually get to see G.I. Joe, Thundercats, and Jem (it’s truly outrageous) hit the big screen in the coming years.

If you’re unfamiliar with the mythology, Transformers are biological robot aliens that can take the shape of vehicles, folding themselves into their own bodies to form the shape of a Camaro or semi-truck for example. There are good robots, called Autobots, and bad robots, called Decepticons. Bumblebee, Sam’s first car, turns out to be an Autobot and at first frightens Sam. But after saving him from a police car robot named Barricade, a Decepticon, Sam warms up to Bumblebee. All originate from planet Cybertron, now a dead world due to ancient Transformer wars. Only a select few Transformers survived; the remaining bunch search for a cube called the Allspark, an unlimited source of energy that could theoretically turn all of Earth’s technology into sentient mechanisms adamant on destroying humanity.

Sam, of course, is the nerd in school, because young heroes in movies like this one are always nerds. And they’re always trying to get a girl way out of their league—Megan Fox’s Mikaela, for instance. Though Mikaela appears to be just another superficial high school movie airhead, she’s actually a gearhead in disguise who becomes intrigued with Sam’s new car (while also being dissected by Bay’s camera, which turns her into a walking, talking sex object). Moments recalling John Carpenter’s Christine show Bumblebee turning his dials to just the right song to create a mood for the would-be teen couple. Both Sam and Mikaela are too smart for that; though, it does provide the audience with a hearty chuckle.

As Sam works on wooing Mikaela, the government tries to figure out who’s hacking into their system and downloading files. John Voight plays Defense Secretary John Keller, who decides what happens to the country while the president hides in a bunker somewhere eating “Ding-dongs”. John Tuturro is an agent in a secret bureau (whenever there’re aliens in a blockbuster, there’s always a new government agency that reveals itself). This agency just-so-happens to know about the Allspark, not to mention a Transformer, called Megatron, who landed on the planet thousands of years ago. The government keeps Megatron on ice and hides the Allspark inside the Hoover Dam. And so, Decepticons unleash robo-hell, setting their leader Megatron free and chasing after Sam and his Autobot friends, in search of the all-powerful cube. Somehow, this all has to do with Sam, his eBay account, and a pair of glasses owned by his great-grandfather in the 1930s.

Incredible CGI creates lively, sympathetic characters out of inhuman robots. Granted, they’ve “learned our ways” from the internet, so they’re able to use slang on a number of cheesy occasions. Lines like “my bad” contemporize the robots momentarily, while giant automaton slapstick signifies the timeless humor of a massive robot hiding in the rose bushes (I couldn’t help but think of Brad Bird’s The Iron Giant). I found myself caring for these lifeless constructions, all completely believable conceptions and manufactured with detail by Industrial Light and Magic—particularly Bumblebee, whose performance is mostly silent to boot. He may not be Charlie Chaplin, or even a muted Gollum, but as speechless CGI Camaros go, he effectively creates sympathy with those glowing blue eyes of his.

Massively imagined action sequences place a Transformer war in the middle of Los Angeles. Toppling over buildings to get at one another, the robots cause a mess, though we never lose sight of who’s who or what’s what—a curious happening in Michael Bay film. Human soldiers laughably attempt to take down walking tanks. Decepticon jets stream past overhead. Meanwhile, LaBeouf’s character is meant to save the day and prevent Megatron’s encroaching revenge. After a string of big-budget disappointments this year, Transformers delivers what the superb ad campaigns promised: a special effects spectacular. I’d recommend filling up on soda and popcorn to munch on throughout; this is a true adventure in the thoughtless, diverting summer blockbuster style. It’s all pretty absurd, the film being about talking robots from space and all. Their names are Optimus Prime and Megaton for goodness sake, how serious could it be? Thankfully, writers Roberto Orci and Alex Kurtzman allow humor to guide the story, even making their government agent villain (Tuturro) into a bizarre lunatic-type perfect for these over-the-top blockbusters. But LaBeof remains the star (and comic relief), no matter how cool Optimus Prime might have been.