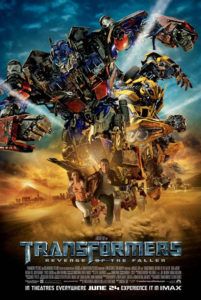 Just when Michael Bay thought he tricked us into thinking that perhaps he wasn’t such a hopeless cause, he releases the sequel Transformers: Revenge of the Fallen, an incomprehensibly awful event movie that everyone will see no matter what is written here. But that’s okay. After you’ve endured the two-and-a-half hours of punishment Bay dispenses in this movie, you’ll realize you should have listened and just rented the original again, or read a book, or watched paint dry. The experience would be more rewarding. Beating us into submission on every turn, this sequel earns a place among the most bloated pictures in Hollywood history. And amid Bay’s laundry list of overstated artistic bombs—which are often commercial blockbusters—the terribleness of this one creates an atomic discharge that will leave you suffering from its radiated badness long afterward. Signature Bay-isms like slow-motion running, abrupt cutting, and ever-moving camerawork are all rampant, but all made somehow worse because they ultimately ruin an otherwise credible franchise. Moments following the end credits, you’ll have no idea what just happened, nor will you be able to explain to your friends what the movie was about, besides fighting robots and a barrage of explosions.

Don’t bother trying to figure out the plot. Ironically enough, one of the characters shouts with frustration at a rambling robot, “Enough, just tell the story! Beginning. Middle. End.” This is paraphrased, of course, but the message remains. If only the writers had followed that structure, audiences might have saved an hour or so of their lives. But rumor has it writing duo Roberto Orci and Alex Kurtzman (whose work on this year’s amazing Star Trek is not repeated here) and co-writer Ehren Kruger (The Ring) were hired to fill in the blanks created by Bay. Reportedly the overzealous director began constructing elaborate Transformer battles with effects wizards at Industrial Light & Magic back during the 2007-2008 writer’s strike, just for something to do. When the writers were eventually hired, they wrote the story around Bay’s already staged fight sequences. (Note to aspiring filmmakers: This is not a good way to make movies.)

The humans are the real pleasure to watch, particularly Shia LaBeouf as Sam Witwicky, whose fast-talking energy still manages to charm us despite his recent overexposure. He’s joined by the ever-glossed lips of Megan Fox, well on her way to being Hollywood’s go-to sex-object. Throughout the movie, the burgeoning couple finally works up the courage to say “The L-Word” to each other, in a cheesy subplot that deserved the cutting room floor. Sam’s annoying parents (Kevin Dunn and Julie White) appear here-and-there just to add some wild and crazy to their respective scenes, which are too many. Sam’s college friend Leo (Ramon Rodriguez) randomly disappears toward the end, not that anyone missed him. And a cadre of American soldiers called “The Nest”, specially trained to deal with Transformers, includes throwaway parts played by Josh Duhamel and Tyrese Gibson… Okay, so maybe LaBeouf is the only real pleasure to watch.

Once again, Sam has to find a small device containing immense power that the very large Autobots and Decepticons are fighting over. It’s a convenient marvel that these massive robots ever made devices so small, because they always just fit into a human’s hands, but seem to drown in their own. Just one of those movie flukes, such as how the girls at Sam’s college all look like supermodels and walk like they’re on a fashion show runway. When one of those babes turns out to be a robot hunting Sam for reasons not worth getting into within this review, a procession of robo-battles ensues, ending in Egypt where a device built into a pyramid millennia ago threatens to destroy the Sun. But not if John Turturro can help it!

Over and above the painfully long running time and nonsensical plot, Bay deposits many more Transformers whose names we never learn before they’re dead. Optimus Prime and Bumblebee have less screentime than before; they’re decoration for the humans, who themselves feel like computer-animated automatons. We’re mostly globe-hopping with our heroes to exotic locales and watching Transformers summarily demolish each other. Battles involving robo-aliens appear unintelligible and scatterbrained; the rolling and clashing of metal parts render the fighting characters indiscernible from each other. The entire schema leans on the Bay maxim that more is more, when really more is less. For example, did we need to see the director’s silly and laughable interpretation of Transformer Heaven?

Worse is the assertive way the script insists upon its excruciatingly unfunny comic relief. Though movies usually reserve one precise role for this function, most of the characters in this sequel provide this service: Twin Transformer cars Mudflap and Skids, two unabashed racial stereotypes that would maybe be appropriate in turn-of-the-last-century minstrel shows, speak “ghetto slang” and cause us to raise an eyebrow. Sam’s mom eats some pot brownies. Tuturro’s ex-Agent character drops his pants for some base hilarity. Sam’s roommate drops his pants too. And we’re subjected to the notion of robot sexuality when we see a Transformer’s “scrotum” and another mini-Transformer humping Fox’s leg. Add to that plenty of swearing and inappropriate humor, and parents should take the PG-13 rating very seriously. Just because they’re robots doesn’t mean they won’t say naughty words in front of your young children.

Transformers: Revenge of the Fallen comes from a known toy franchise, offers name-brand recognition by being a sequel, boasts loud and big special effects, and will undoubtedly disappoint. So, it meets all criteria for your standard summer blockbuster. Bay finds every reason and no reason at all to blow crap up real good, proving once again why he should be directing commercials for energy drinks and pop-music groups, but not motion pictures. So, after his surprisingly first-rate effort on Transformers in 2007, it’s good to know the world has returned to normal and Michael Bay is an unquestionably bad director again.