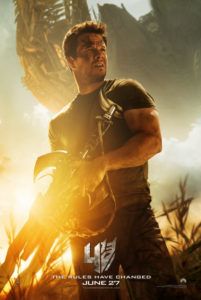 With Transformers: Age of Extinction, Michael Bay once again douses the Paramount-Hasbro franchise in sensationalist overkill and sets it ablaze. This fourth installment marks the first in a proposed new trilogy of Transformer movies that take place in the same general world as previous entries, but, in the wake of Shia LaBeouf’s very public meltdown, boasts a new human cast alongside old robo-favorites like Optimus Prime and Bumblebee. The director reteams with Revenge of the Fallen and Dark of the Moon screenwriter Ehren Kruger, whose script knows no limitation to its ludicrousness, feeding Bay’s affinity for mass destruction and onscreen mayhem. Together, Bay and Kruger have set a slackly bound product inside a bloated 165-minute package and shipped it to thousands of screens worldwide. The entire production is ever fixed on more-more-more, from Bay’s usual smattering of barefaced product placements, to the inorganic ways Kruger incorporates China into the scenario to ensure a broader overseas box-office haul. And no matter how lackluster the critical result, Bay’s well over $1 billion cumulative domestic take on his initial trilogy has justified, financially anyway, every base creative decision he made from 2007-2011, and his generally lousy filmmaking will undoubtedly continue to amass huge profits.

After rescinding Chicago to rubble to stop evil Decepticons in Dark of the Moon, the Transformers have been ousted by the U.S. government that once relied on their formidable world-saving talents. Duplicitous CIA agent Harold Attinger (Kelsey Grammer) proclaims “The age of the Transformers is over” and at the same time spearheads a paranoia campaign—complete with “Remember Chicago” posters—to incite a national fear of robo-aliens. Attinger also assigns his Black Ops outfit, codenamed “Cemetery Wind” and led by the dastardly Savoy (Titus Welliver), to align with a villainous transformer Lockdown (voice of Mark Ryan), otherwise unaffiliated with either the Autobots or Decepticons, to hunt down Optimus Prime (voice of Peter Cullen) and his allies. But it’s all a hypocritical rouse in the name of patriotism, as Attinger has plans to build his own army of controllable robots with the help of Joshua Joyce (Stanley Tucci), a Steve Jobs-esque tech mastermind who wields Megatron’s severed head as inspiration. If Attinger and Joyce can deliver Optimus Prime, Lockdown will hand over something called “The Seed” that does who-knows-what and replaces the central MacGuffin in the first Transformers, the “All-Spark”. Meanwhile, Joyce hopes to create his own brand of Transformer and, using bits from Megatron, builds a “better” version known as Galvatron and plans to control him—a plan that doesn’t work out too well.

Tossed into the mix are human characters, all of whom feel on a different plane of dramatic existence than their robotic counterparts, beyond the obvious distinctions. Replacing LaBeouf’s charming teen Sam Witwicky, who bought his first car that turned out to be a Transformer, is Texas widower Cade Yeager (Mark Wahlberg). While surveying a movie theater scheduled for demolition (Bay’s views on the future of cinema are not optimistic, ironically enough, given his contributions to the dumbing of blockbusters), Cade finds an abandoned truck he means to restore and sell to pay his daughter Tessa’s (Nicola Peltz) college tuition. The truck turns out to be the damaged Optimus Prime in need of refurbishments. Conveniently, Cade runs a ramshackle robotics lab out of his barn and gets the Autobot leader back on his feet (in a role that suits Wahlberg about as well as playing a science teacher in The Happening). Along with Tessa’s racecar driver boyfriend Shane (Jack Reynor), Cade and Tessa are pulled into the previous paragraph’s conflict when Cemetery Wind and Lockdown arrive at the farm looking for Optimus Prime. Before long, Opitmus and his new human cohorts resolve to bring the fight to Attinger alongside the few remaining Autobots: mute charmer Bumblebee, cigar-chomping and gun-toting Hound (John Goodman), samurai soldier Drift (Ken Watanabe), and cockney-voiced rogue Crosshairs (John DiMaggio)—all of them now rather cynical about the human race.

The Transformers’ dialogue is less annoying than in Revenge of the Fallen and Dark of the Moon in that fewer pop-culture references and slang terms inhabit the conversation—although occasional declarations like “Die bitch!” creep in. However, there’s endless Transformer monologuing about the imminent dangers from space and their increasingly overcomplicated mythology, yet there’s nothing resembling a dramatic arc for any of them. Even less developed are Tessa and Shane, the former being a typical Bay damsel-hottie, and the latter of whom is memorable only because Cade refers to the Irish-accented character as “Lucky Charms” throughout. Tucci’s over-the-top presence as a megalomaniacal scientist offers a buffoonish equal to roles had by John Turturro and John Malkovich in previous entries; later on, Joyce develops a conscience, and therein represents the only character with a dramatic arc in the entire production. Joyce’s Chinese business partner, Su Yueming (Li Bingbing), provides an excuse for the story to shift to its Hong Kong location in the final hour, and though she’s set up as a tough businesswoman, she’s later reduced to a gross Asian stereotype when she proves to be an adept martial artist.

Littered throughout Age of Extinction are strains of Ridley Scott’s Prometheus, beginning with the prehistoric prologue where non-robotic alien visitors wipe out the dinosaurs to convert Earth into a Transformer-friendly planet. Lockdown refers to these omnipotent aliens as “The Creators” and though they remain off-screen, a fleshy hand is spied in the opening. Some 65 million years ago, whatever they did resulted in dinobots, towering robots who transform into dinosaurs instead of vehicles. They’re a convenient and under-explained addition to the film’s climactic battle, and they’re present only to sell more toys. Similarly, The Seed is never fully explained, even if we’re given enough clues to make an educated guess. Whoever these Creators are, Lockdown insists they’re they origin of all life in numerous galaxies; and so, perhaps The Seed is some sort of planet-changing device that will inevitably come to play in future sequels. But Optimus Prime bows to no one; in the end he resolves to take the fight to his makers and, just like Noomi Rapace in the last scene of Prometheus, zips off into space after The Creators in search of answers. Just a guess, but it’s doubtful Bay’s fifth and sixth franchise installments will be about Optimus Prime’s search for existential truth.

Bay’s famously narcissistic personality finds its way into the proceedings more than once, suggesting he might be aware of his own reputation enough to poke fun at himself. At one point, a theater owner quips about sequels ruining movies today (like this one, and the previous two), which might suggest that Bay has lightened up. But his penchant for gratuitous destruction hasn’t waned at all. Age of Extinction is filled with one unintelligible action sequence after another and no consideration for shot-to-shot logic, almost like the movie version of dissonant counterpoints, except not beautiful. The plot just keeps going and going, all of it shot on top-notch tech—including new, smaller, more maneuverable 3D cameras—for maximum sensory overload. As always, expensive-looking CGI brings everything onscreen to life, but Bay’s orchestration of the chaos is indecipherable. Through it all, Age of Extinction juggles competing plot strains (Attinger’s campaign to eliminate Transformers, Lockdown hunting Transformers for The Creators, the emergence of Galvatron and his army of Joyce’s man-made Transformer baddies, and the human stuff) when one of them would suffice.

Less mean-spirited than Revenge of the Fallen and Dark of the Moon, Bay’s latest addition to the Transformers saga is more watchable than the last two entries, but nowhere near the fun of the 2007 original. Product placements for Bud Light, Gucci, Victoria’s Secret, and several others stand out in distracting fashion, while the film’s Asian stereotypes bring into question how the Chinese market will respond to a production that has clearly tried and failed to find a natural way of appealing to Chinese audiences. Everything about Age of Extinction reeks of being “a Michael Bay film” in the worst ways; and yet, he’s made worse. Casting Wahlberg (his star of Pain & Gain, a movie so bad this critic refused to write a review) was a fine choice, except balance between humans and Transformers is never found. Kruger hasn’t conceived a way to make Transformers three-dimensional without 3D glasses, and his human characters always feel like an afterthought in a much larger story. Bay’s garbled action, Kruger’s scattershot writing, dull humans, underdeveloped robots—these are the same issues that have plagued Transformers movies since the start. No matter how many coats of paint you slather on an old clunker, it’s still a jalopy under the hood.