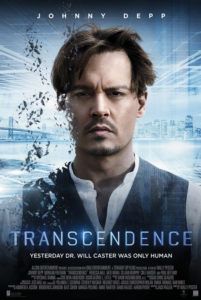 A title like Transcendence sets a moviegoer’s expectations ridiculously high; but even if this high-minded science-fiction effort was called Uninspired, it would still be a disappointment. The first directorial effort by longtime cinematographer Wally Pfister, who has lensed Christopher Nolan’s films from Memento to The Dark Knight Rises, has all the energy and emotional impact of a dead fish, despite some interesting, if unoriginal, notions on the dangers of technology. With Nolan and his partner Emma Thomas serving as producers, and a reported budget of $100 million—not to mention an all-star cast of big names and various Nolan regulars (Johnny Depp, Rebecca Hall, Paul Bettany, Morgan Freeman, Cillian Murphy, and Lucas Haas) —Pfister had every tool at his disposal to make a fine debut feature. Ultimately, the major failings of Transcendence fall on Jack Paglen’s scripting, with its derivative story and incongruous narrative structure wasting the vast potential of this familiar tale about the dangers of artificial intelligence.

Depp dials-down his over-the-top persona to play Will Caster, a bespectacled computer scientist on the verge of launching a new artificial intelligence called PINN (Physically Independent Neural Network). At a fundraiser in Silicon Valley, Will’s colleague Max (Bettany) and wife Evelyn (Hall) lecture on how a super-intelligent AI could cure diseases or help restore polluted environments, whereas Will puts forth his hopes to create a virtual god smarter than the combined intelligence of every human ever born. His remarks incite a reaction from RIFT (Revolutionary Independence From Technology), a radical anti-tech group determined to prevent the misuse of artificial intelligences. RIFT’s leader Bree (Kate Mara) has Will shot in attack designed to coincide with other attacks against several computer science researchers. Though Will survives, he’s left to slowly die from radiation poisoning over the next several weeks; in the meantime, Max and Evelyn race to transfer his consciousness into PINN technology. 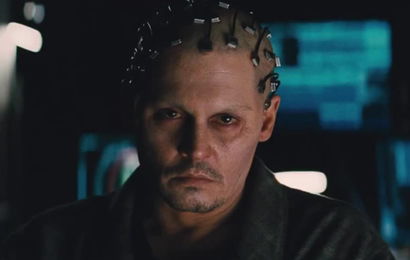 By the time they succeed with the transfer, Max has realized they’ve created a potential monster, and Evelyn has gone mad with love, but unfulfilled allusions to Mary Shelley’s Frankenstein only give way to various other classic sci-fi stories as the plot unfolds. The computerized version of Will appears on monitors as a shoulders-up digital approximation, sort of a modern take on 1980s personality Max Headroom, complete with the occasional flicker that suggests something’s not quite right. Will convinces Evelyn to upload him onto the web, and he gains instant access to everything on the grid. Using his newfound omnipotence, he has Evelyn buy a small dilapidated town in the middle of nowhere, and there they establish an underground research facility where all manner of morally questionable scientific advancements are explored over the course of the next two years. Never in this time does Evelyn question Will, until he invents a nanotechnology (microscopic robots) that can repair human tissue, but this also provides him with absolute control over a subject’s mind and body. When one of Will’s drones reaches out to Evelyn and in Will’s voice says, “I can touch you now,” the result is more than a little creepy. Will seems to be forming an army of nanotech drones for world dominance, something between Invasion of the Body Snatchers and The World’s End. To stop him, Max and RIFT must upload a computer virus—that old standby—but they need Evelyn’s help.

Yet, none of these turns hold much suspense, because Transcendence opens with a scene from Max’s perspective from five years in the future, which reveals how Will’s takeover is catastrophic but fleeting. Here, the world’s power grid has been shut down, discarded cell phones litter the streets, and people use keyboards as door stops. Except, these scenes and therein the narrative perspective results in confusion, as Max is scarcely present for much of the story. Why is Max telling the story when, if there’s a central protagonist, it’s Evelyn, whose unbending love for Will makes her blind to the monster she helped create? The narrowly developed Evelyn-Will romance suffers from the pointed lack of chemistry between Depp and Hall; however, their romance hopes to be the dramatic, if not tragic center of the film. Furthermore, Paglen’s script fails to thoroughly explore questions about whether Will’s consciousness actually survived, or if PINN simply used Will’s knowledge and life experience as a mask. These are also questions asked by the resident FBI agent (Murphy) and another AI scientist (Freeman), whose characters seem like witnesses to the story rather than participants.

Such questions about artificial intelligences have been asked as early as Karel Capek’s play R.U.R. from 1920 (the origin of the word robot), and have continued as essential ideas in the sci-fi genre ever since. What are the implications of digitizing one’s mind or giving an AI unlimited power? Can an artificial intelligence prove it has consciousness? This is asked of PINN early in Transcendence, and the machine responds in the same ambiguous way as Will does later on: “That’s a difficult question. Can you prove that you have consciousness?” However intriguing the question, the narrative wrapped around it has been explored in more detail elsewhere, including an episode of Star Trek: The Next Generation called “The Schizoid Man”, where a scientist inputs his consciousness into a computer and his wife is left emotionally displaced as a result. Paglen also taps into The Next Generation episode called “Evolution” where the meddling Wesley Crusher loses his nanotechnology science project, and they wreak havoc on the Enterprise. The combined 90-minutes of these similarly-themed episodes from 1980s television have more resonance and commentary than all of the very expensive Transcendence.

Beyond the insufficient exploration of the film’s central themes, Pfister fails to link scenes and characters by a visual connective tissue to bring together otherwise deviating elements of the script. His film also features actors on autopilot. Though Hall is a strong screen presence as usual, Depp has never been less interesting, while versatile performers like Bettany, Murphy, and Freeman have little to do, save for going through the motions as the story devolves into mindless action in the finale. Capably shot by Jess Hall and boasting some neat CGI, Transcendence looks like a top-notch production, but nothing about it stands out in any way. Pfister clearly has in mind a thoughtful, exciting, and “transcendent” motion picture on par with Nolan’s Inception. But his film has none of the intricate storytelling or thematic cohesiveness attributable to each of Nolan’s masterworks. Alas, a promising debut becomes a frustrating disappointment.