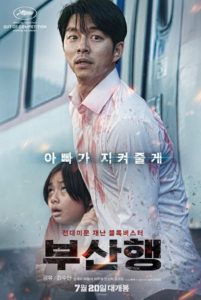 Zombies become relevant, even vital again in Train to Busan (Busan haeng), a tense horror story that unfolds with breakneck pacing and unexpected emotional substance. South Korean director Yeon Sang-ho makes a leap from animation to his first live-action feature, delivering a decidedly commercial project compared to his earlier releases. Yeon’s The King of Pigs (2011) and The Fake (2013) took probing and acerbic looks at bullying, poverty, and religion, while his other 2016 work, Seoul Station, dealt with a zombie outbreak in less straightforward terms—all of them animated. The director makes a graceful transition to live-action with this debut, as Train to Busan proves far more accessible and purely entertaining, while also containing the social commentaries and grim view of humanity for which the director is known. A mixture of perfectly calibrated scares, unlikely laughter, rage over social injustice, and even a few tears combine into a wholly satisfying experience.

Delivering his country’s biggest box-office performer of the year with more than $90 million in receipts in S. Korea alone, Yeon’s international hit has already sold its English-language remake rights to France’s Gaumont—despite not having a sizeable U.S. theatrical release. Imagining a successful remake is difficult, beyond the usual unlikelihood of a worthwhile rehash (see Spike Lee’s remake of Park Chan-wook’s Oldboy for evidence), since Train to Busan’s considerable subtext reflects a number of issues specific to Yeon’s home country. After the Middle East respiratory syndrome (MERS) swept through S. Korea in 2015, stories of nationwide terror and plague hysteria consumed the headlines. Add to this an already prevalent national discussion about a division between social and economic classes, and suddenly a foundation emerges for a zombie allegory of better-than-average intelligence.

Juggling his ex-wife and cushy career as a fund manager in Seoul, workaholic Seok-wu (Gong Yoo) neglects his young daughter Soo-an (Kim Su-an, excellent). Only after botching her birthday gift and breaking her heart does he agree to deliver Soo-an to her mother in Busan, over two-hundred miles away. But their journey is just over an hour on S. Korea’s KTX high-speed train, which they board amid vague news reports of rioting and contagion throughout the country. Audiences have already seen glimpses of the zombie outbreak by now, including some uncertain allusions to a research facility leak as the cause. But in true zombie horror tradition, the source doesn’t matter much once fast-moving flesh-eaters start biting and adding to their rampant horde. The zombies themselves are scary and reminiscent of those in World War Z (2013), screeching and piling over each other in a rabid attempt to blindly attack anything that moves.

And so, our sense of dread is very real when a near-dead bite victim boards the same train as Seok-wu and Soo-an. Once the train’s attendants lock the exits, there’s no escape; the zombie chaos spreads. Seok-wu’s self-interest hangs over his every action and, at one point, he tells his daughter, “At a time like this, only watch out for yourself.” Fortunately, other passengers prove less cynical and build Train to Busan’s rather affecting theme about the importance of helping others in times of crisis. Among the most enjoyable characters are the blue-collar Sang-hwa (Ma Dong-seok) and his pregnant wife Sung-kyung (Jung Yu-mi), who remain unafraid to scorn Seok-wu for his petty behavior and, at first, act as surrogates to Soo-an. If the parents-to-be represent how Seok-wu should aspire to behave, then the entitled executive Yong-suk (Kim Eui-sung) represents the lowest point of humanity. A detestable character on par with Paul Reiser’s turn in Aliens (1986), Yong-suk cruelly uses his influence to ensure his own survival. 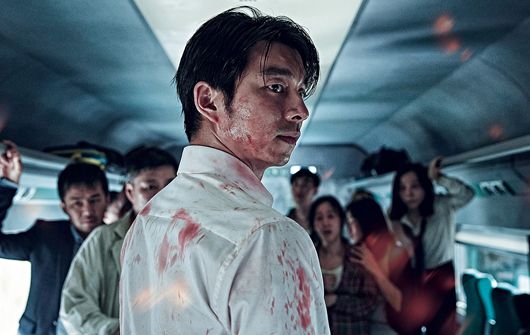 Naturally, parallels exist between Train to Busan and Bong Joon-ho’s great dystopian thriller Snowpiercer (2014), given that both structure their plot around the fast-moving train to amplify the story’s advancing momentum. Both involve a journey through perilous traincars, each of which presents its own unique challenge. Consider a breathless sequence in Yeon’s film where the train enters a tunnel and everything goes black. The passengers discover the zombies cannot see in the dark. Our heroes must use the moment and silently pass by unnoticed, recalling the scene in Snowpiercer when the rebels face a car filled with axe-wielding killers in the dark. Though Train to Busan contains a few stops along the way, including a wildly scary interlude at an infested station, its inherent forward thrust cannot help but cause the viewer to writhe in their seat.

Yeon makes the most of the claustrophobic zombies-on-a-train concept, blending human drama with effective, genuine shocks in cramped spaces. But there’s plenty of action off-train too, using elaborate and impressive set pieces to explore the concept to its fullest. Occasionally the special FX threaten to call too much attention to themselves, but even amid a wowing derailment and swarms of zombies, screenwriter Park Joo-suk never forgets about the characters. Ma plays an affable and chummy tough guy reminiscent of Russell Crowe, and Gong’s father role affords a satisfying redemption arc. Kim’s rather awful corporate bastard may aggravate you, but he’s the sort of villain whose eventual comeuppance proves oh-so-satisfying. However, the best character must be Soo-an, whose tearful rendition of “Aloha ʻOe” won’t leave a dry eye in the house.

Train to Busan defies the notion that all has been said and done when it comes to zombies. It begins with an unrelenting setup, and the second half only becomes more complex, frightening, and emotionally involved as it goes—a strange rarity for zombie films today. After all, when AMC’s The Walking Dead pushes new boundaries with each new episode, zombie stories on film could hardly expect to compete, much less equal classics like George A. Romero’s Night of the Living Dead (1968) and Dawn of the Dead (1979), or even the newer 28 Days Later (2004) by Danny Boyle or Shaun of the Dead (2004) by Edgar Wright. But Yeon finds a way of delivering well-established genre elements within an exciting and resonating framework. He turns predictable tropes into an urgent rollercoaster for genre enthusiasts, and a curious but rewarding ride for fans of blockbuster-sized entertainment.