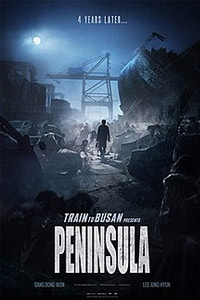 The biggest problem with Train to Busan Presents: Peninsula is the title and the expectation it creates. The movie does not feature a train, nor does it spend much time in the South Korean city of Busan. Get over that, and there’s a blockbuster-sized zombie actioner to enjoy, complete with a theme that resonates in today’s divided world: in times of turmoil, people tend to segment themselves into extreme factions. The zombie genre has taught viewers this lesson again and again. In Peninsula, some people turn into ruthless opportunists, some realize that home is where their family is, and some throw their fellow humans into a zombie arena deathmatch for entertainment. It’s all familiar stuff for the genre, but as usual with well-worn material, it’s not about the novelty of what happens, it’s about how the movie packages those elements.

Yeon Sang-ho’s original Train to Busan from 2016 had a similar approach. It wasn’t exactly breaking new ground with its zombie-outbreak-on-a-train conceit, but its character-driven story and fast-paced, claustrophobic action had narrative thrust to spare. Imagine a Snowpiercer (2013) scenario, where each train car represents a new set of obstacles—accented in fast-moving zombie gore—each as memorable as the last. After making the most out of its simple concept, the first film earned around $100 million worldwide and assured Yeon’s sequel, which complicates matters, and not always in the most elegant ways as its predecessor. After a canceled premiere at the Cannes Film Festival, it debuted in South Korea in July amid the COVID-19 pandemic. Fortunately, the country dealt with the virus better than most others, making its box-office performance high for 2020 (roughly $40 million). Given the large-scale extravaganza that ensues, one laments having to miss the theatrical experience.

Set four years after Train to Busan, the story finds Jung-seok (Gang Dong-won), a former soldier who loses his sister and nephew in the nightmarish prologue, living in Hong Kong after escaping from South Korea. With the zombie plague isolated to South Korea (“The Peninsula”), there are now all sorts of treasures left by those who abandoned the country. A fried-chicken-faced American gangster enlists our hero, along with his broken brother-in-law Chul-min (Kim Do-yoon) and two others, for a mission to Incheon, South Korea, to steal millions in U.S. dollars sitting in a truck, just waiting for someone to snatch it. “Don’t worry about them zombies,” says the gangster. “They’re practically blind at night.” He’s one entry point character among many in the first act, which plays at times like a video game tutorial. Another gangster gives Jung-seok trackers, satellite phones, and a deadline to sneak in and out with the package, and the setup begins to feel like Escape from New York (1981). 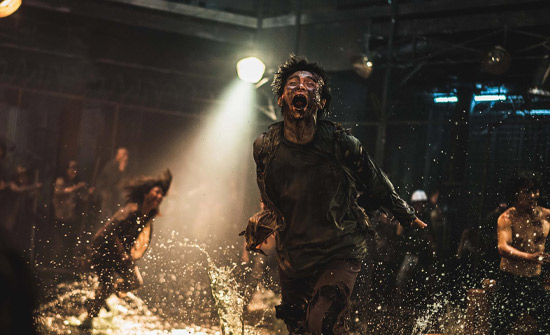 If a daring nighttime heist amid hordes of running zombies attracted to light and sound wasn’t bad enough, the mission takes a turn when our heroes are attacked by raiders—heavily armed humans who survive on scraps and desperately want to escape the Peninsula. When they get a hold of Chul-min, their violent leader Sergeant Hwang (Kim Min-jae) announces, “Take him to the arena!”—words you never want to hear in a post-apocalyptic situation. Meanwhile, Jung-seok takes refuge with Min-jung (Lee Jung-hyun), a mother who has survived alongside her two daughters, Jooni (Lee Ra) and Yu-jin (Lee Ye-won), and their batty grandfather (Kwon Hae-hyo). The dynamic of heartrending family ties and zombie chaos was one of the best features in Train to Busan. But by Peninsula’s extended concluding scenes—packed full of slow-motion sentimentality, teary deaths, even tearier reunions, and a lofty score by Mowg—the heavy-handed emotional manipulation becomes too much to bear.

In an unexpected twist, Peninsula resembles Mad Max: Fury Road (2015) when the raiders chase down the sympathetic survivors in a high-speed car chase through Incheon’s ruins. Although it’s rendered with CGI that looks, again, like a video game, the driving sequences are no less thrillingly choreographed. The teenage Jooni steers the seemingly indestructible family SUV around like a dynamo (alternate title: Peninsula Drift), spinning the vehicle into mounds of chomping, reaching undead, who then go flying into the air like they’re made of rubber. The zombies themselves recall those from World War Z (2011) in their cartoony quality. The freaky arena scenes make better use of actors and scary practical effects. But then, Yeon, who wrote the screenplay along with Park Joo-Suk, takes a cue from Aliens (1986) and delivers a movie more dependent on action than horror. The runtime feels dominated by shootouts and car chases instead of terrifying interactions with brain-munchers.

Some viewers may feel let down by Yeon’s choice not to recapture the frantic energy of Train to Busan and its animated prequel, Seoul Station (2016), and instead, veer into George Miller territory. Sure, Yeon conceives his own Thunderdome and extended multi-car chases with stunts galore, and most of the visual bravado comes to us by way of computers, as opposed to a Miller-style insistence on practical effects. Although its presentational mode may prove less than visually pleasing for some viewers, Peninsula bears a certain mind-numbing appeal in its high-speed-heist conceit (Fast and Furious fans should feel right at home). And unlike its predecessor, Yeon doesn’t sell the intended emotional impact of the finale. But between the pacing and downright zany array of vehicular shoot-em-up sequences, there’s plenty to satiate the viewer’s hunger for zombie action, even if it works better as a solo outing than a sequel.