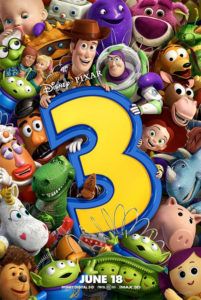 By the time the third entry in any franchise comes around, audiences must ask themselves if the material remains as strong as it once was originally. Perhaps it’s become stronger over the years, or perhaps it’s gotten to the point where the franchise has run itself into the ground. Of course, Pixar Animation Studios knows just how to avoid becoming stale. Consider Toy Story 3, which resonates with themes and familiar situations from its predecessors, and yet proves to be a complete joy, filled with hilarious slapstick and ever heartfelt emotion. It may be the most entertaining of all the Toy Story films. Should we expect anything less from Pixar than to meet, even exceed our expectations?

Much time has passed since Pixar’s last adventure with the toys from Andy’s room. It’s been 15 years since Toy Story was released in theaters, and 11 years since Toy Story 2. How time has passed, and how Pixar has grown. When Toy Story, their first feature-length film, was released, they were an obscure Hollywood entity bent on making fully computer-animated films. Now they’ve surpassed even Disney in terms of their animation quality and storytelling. Furthermore, they’ve made computer-animation the standard medium in animation today. And despite the company’s vast improvements in animation since the previous Toy Story films, the third film looks better than but doesn’t appear too visually superior to the others—allowing it to fit nicely into a trilogy with appreciation for the advanced animation, but without upgrades that might it make feel out of place in the filmic world we’ve grown accustomed to. 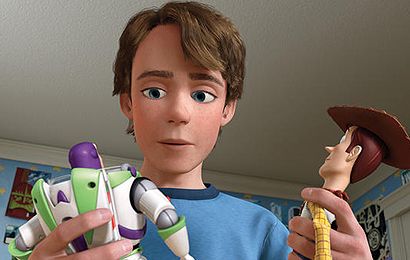 Time has also passed for Andy, voiced by John Morris, who lent Andy his voice as a child for the first two films. Now that enthusiastic little boy is going off to college, and his mother wants his room cleaned and the clutter either put in the attic, donated, or in the garbage. His toys knew this day was coming, but Woody (Tom Hanks), Buzz (Tim Allen), Jessie the Cowgirl (Joan Cusack), Hamm the Piggybank (John Ratzenberger), Mr. & Mrs. Potatohead (Don Rickles, Estelle Harris), Rex the Dinosaur (Wallace Shawn), and Slinky the Dog (Blake Clark, as Jim Varney died in 2000) will miss their owner nonetheless. At the last moment, Andy resolves to bring his trusty Western pal Woody along with him to college, whereas the rest of his toys are intended for the attic but accidentally end up in the garbage.

The attic toys soon find themselves donated to a daycare center. Woody follows to rescue the others, who ultimately decide to stay. And so Woody tries to return to Andy but finds himself in the ownership of an adorable, kind-hearted little girl named Bonnie. At first, the toys at daycare believe they’ve found bliss in a place filled with children who want to play with them. That is, until they realize how violent a gang of children can be on a toy. They chew, bang, paint with, and tear apart toys, losing pieces and swallowing them and sticking them in places they shouldn’t. The other toys in the daycare, led by a pink, fluffy bear named Lotso (Ned Beaty), also inhabit a world that’s more than it seems. But that’s for you to discover. Suffice it to say, plenty of new characters emerge. This includes a hilariously flamboyant Ken (Michael Keaton) to match Andy’s sister’s sole Barbie (Jodi Benson), and an ominous baby doll known only as “Big Baby”. There’s even a brief appearance by a plush Totoro for fans of Hayao Miyazaki’s My Neighbor Totoro, no doubt inspired by die-hard Miyazaki enthusiast, and director of the first two Toy Story films, John Lasseter.

Buzz and the gang eventually reach out to Woody, who proceeds to organize an escape for his friends from the tightly secured daycare. This leads to an action-packed third act that has the toys barely escaping death from a frightening army of malevolent toys and later a trash grinder. But in the final scenes, the film contains sentiments on the passage of time that close out the Toy Story trilogy on an earnest note. Younger audiences newly familiar to the material may not grasp the deeper emotional meaning in these scenes, but they’ll walk away with an understanding that friendships are important. Adult audiences, but more so audiences who were children in 1995 when the first film was released and have since grown up with the material, will find Andy’s epiphany in the end wholly affecting in that bittersweet, yet joyful way that Pixar has mastered over the years. The last few moments are sure to induce tears. In that respect, Toy Story 3 almost feels as though it was made for adults, with plenty of material in there to entertain the kiddies, versus the other way around. 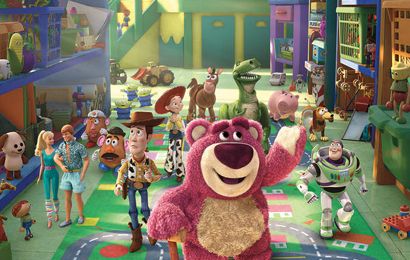 Household names like Hanks and Allen succeed in disappearing into their roles, enough so that we no longer hear actors, rather we recognize the familiar voices as those of memorable characters we know and love. No matter how many Oscars Hanks wins, or how many other unforgettable performances, his voice simply dissolves into Woody’s persona. The same goes for Allen, although his ongoing string of bad comedies is just as easily forgotten in favor of Buzz. These characters have become iconic in such a brief time, as recognizable as Humphrey Bogart, that only Pixar could have kept them seemingly encapsulated over the years to appear (and sound) as though no time has passed.

Pixar’s only misstep is releasing the film in the 3-D format. Forgetting the added charge to the ticket price and dismissing the unsanitary, rather disgusting community glasses idea the movie studios have propelled, the 3-D gimmick takes away from the brightness of the picture. Pixar films pop with color, and to wear dimming glasses for an effect that’s more a distraction than a plus, is absurd. It’s unfortunate that Pixar has jumped on the 3-D bandwagon (which was probably insisted upon by Disney), and one can only hope that they realize it diminishes their film(s) . Luckily, most theaters offer both 3-D and 2-D showings, so you should seek out the latter and enjoy the full visual splendor of Pixar’s latest venture. That aside, Toy Story 3 lives up to the standard of quality that audiences have come to expect from Pixar. Though no one will call this their best release yet, it completes an important trilogy of films on a remarkably high note, and in a way finally puts aside their early years, allowing them to move on to more daring projects, like their upcoming sci-fi epic John Carter from Mars. Filled with bravado action sequences, endless laughter, and the kind of emotional power that makes the film more enjoyable for adults than the targeted child audience, this film is simply a delight in every respect.