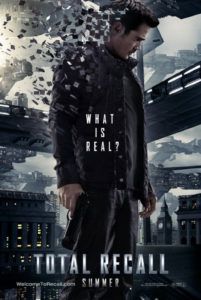 In remaking Paul Verhoeven’s 1990 sci-fi actioner Total Recall, director Len Wiseman (Underworld) somehow made the best aspects of his film those not related to the original, whereas his nods to the Arnold Schwarzenegger-starrer range from lackluster to nonsensical. But that’s the problem with remaking such a well-known property, isn’t it? Those who have seen the original remain the top market for the remake, and so the filmmakers feel the need to reference the original in distracting ways, even if it means sacrificing the new audience’s ability to understand what’s going on, as well as the integrity of the new ideas they’ve injected into their remake. And yet, there’s an exciting, elaborately designed special FX extravaganza somewhere inside the new Total Recall. If only screenwriters Kurt Wimmer (Equilibrium) and Mark Bomback (Unstoppable) relied less on the original’s influence and instead allowed their own ideas to grow, there would be a vastly enjoyable film here.

Inspired by the short story We Can Remember It for You Wholesale by Philip K. Dick, both films involve a lowly blue-collar worker who goes to a company called Rekall, which implants very realistic memories of expensive vacations and escapist adventures for cheaper than the real thing. When our seemingly normal protagonist signs up, he asks for the secret agent package, but the technicians discover he may already be a secret agent. But is he? Or is the entire screen story merely an implanted memory from which the hero cannot escape? Drawing heavily from different sets of Dickian themes and settings, each film employs this basic setup, whereas the first one played more with the notion that the entire scenario might be part of the Rekall experience. The original featured a conspiracy set on Mars, where a dastardly overseer controlled the planet’s clean air supply for which he set the price and thus owned the Martian inhabitants. Schwarzenegger’s hero bands together with mutant rebels who fight to activate an alien generator that will create free clean air for everyone.

There’s a different kind of conspiracy driving the plot in Wiseman’s remake, but it’s a conspiracy nonetheless. Set in the post-World War III year of 2084, Earth has been devastated by chemical warfare, leaving most of the planet’s surface uninhabitable, save for the areas cities: The United Federation of Britain (UFB) has prospered since the war under Chancellor Cohaagen (Bryan Cranston); and on the other side of the planet, the dystopian metropolis known as The Colony covers what used to be Australia. A labor force of thousands travels between these two cities on a gravity train, called The Fall, through the center of the planet. Among them is Douglas Quaid (Colin Farrell), a common factory worker who assembles police robots for a living. The filmmakers’ clear adoration for these Dickian worlds is seen in their design and oppositional relationship, both of which closely reference other text-to-film adaptations of Dick’s source material. Take The Colony, which looks inspired by Ridley Scott’s Blade Runner, complete with a Tokyo-like setting, bright neon lights, constant rain, and bleak skies. On the other end of The Fall is the UFB, a utopian world of metallic sheens and magnetic flying cars straight out of Minority Report. UFB houses the elite class, while everyone else (including Quaid) suffers in the overcrowded Colony.

Dissatisfied with his life and haunted by dreams of a mystery woman (Jessica Biel), Quaid visits Rekall to escape into a super-spy fantasy wherein he will fight an evil corporation and save the day. To justify this, there are one or two clever details to appreciate early on, such as Quaid reading an Ian Fleming James Bond novel on his way to work. This establishes Quaid’s desire to be an action hero spy, but the film forgets about these details once the momentum picks up. Once he’s strapped into the Rekall chair and the process has begun, the technicians realize they’ve burst a “memory cap” and found Quaid to be an actual spy. Of course, Quaid remembers nothing about it. There’s a shootout, and after a daring escape from the police, he returns home to find his wife, Lori (Kate Beckinsale), who has been playing a part in a vast scheme and now wants him dead. Following breadcrumbs left by his former self, Quaid makes it to UFB, meets his mystery woman named Melina, a freedom fighter in the rebellion against Cohaagen, and faces off against an army of robot goons Cohaagen has ordered to invade The Colony to make room for the UFB elite.

As with Wiseman’s Live Free and Die Hard, the director’s strength resides in keeping a persistent pace in the film’s almost nonstop, superbly orchestrated action sequences, while things like character and logic are secondary at best. Quaid narrowly evades his ruthless wife in a rooftop chase sequence reminiscent of recent parkour-heavy movies. Later he evades robot cops on the magnetic streets of UFB, a sequence blending familiar ones from The Fifth Element and the aforementioned Minority Report. Later still, there’s an interesting sequence where he and Melina make a getaway through elevator shafts that go every which way. It’s all rendered with top-notch CGI and lit with numerous lens flares, all very derivative of sequences we’ve seen before elsewhere, but it’s so capably delivered to us that one can hardly complain about the film’s overall lack of originality. On another level, visually, Wiseman’s film is quite something to behold; there’s a degree of detail reminiscent of the Star Wars prequels that’s undeniably fascinating, but like those films, the effects hardly make up for the flat character development.

All at once, there’s a familiar halt where Quaid’s factory worker pal (Bokeem Woodbine) appears and tries to convince him that it’s all a dream, that he’s actually unconscious right now at Rekall. The way this character goes about it wouldn’t convince anyone, whereas the Schwarzenegger version instills lasting doubt when, out of nowhere, the leading doctor and spokesperson behind Rekall appears in the scene to talk Quaid out of his “schizoid embolism.” Wiseman’s update never creates a believable sense of doubt, and so this scene, as well as a last-minute attempt to fool us into thinking it’s all a dream, passes without uncertainty. We’re always quite sure of this Quaid’s actual identity, but every time I watch the Schwarzenegger version, the film refuses to allow me to decide, wonderfully so. This is unfortunate, not only because the film’s potential layers are left one-dimensional, but also the writers’ uninspired attempts to implant doubt waste a perfectly good paranoid performance by Farrell, who excels at creating characters filled with self-doubt (see Cassandra’s Dream or In Bruges).

Wiseman and company remain overly dedicated to Verhoeven’s original, so much so that their film replicates entire scenes, and then incorporates moments from the original that make no sense in this context. Consider how in the original part of the Martian population were mutants, including a three-breasted prostitute. In spite of his PG-13 rating, Wiseman repeats that scene here, except there’s no explanation for how there’s a three-breasted woman in this world. There’s no mutant underground or talk of how WWIII left a segment of the population mutated; there’s just this random mutant woman who happens to have three breasts. You figure it out, the filmmakers seem to be saying. Or perhaps I missed something. Or perhaps it’s just a ludicrous addition to appease fans of the original. But their devotion to Verhoeven’s classic is not all blind enthusiasm. I like how the writers have combined Michael Ironside’s Richter and Sharon Stone’s wife characters into a composite for Beckinsale, who’s so effective as a tough-as-nails, hard-nosed bitch.

Alas, Total Recall spends so much of its time trying to duplicate aspects of the original that the filmmakers were distracted from their most clever ideas. Cohaagen’s robot conspiracy to take over The Colony is a stirring one and, had the film developed it more, the experience would have been far more enjoyable, and the film would have distinguished itself from its predecessor. Likewise, the film’s impressive cast is reduced to mere cameo appearances: Billy Nighy has about three minutes as the rebel leader; John Cho has two minutes as a Rekall salesperson; Cranston feels criminally underused; Ethan Hawke shot scenes that were altogether cut from the film. In all, there’s not enough of what works and far too much of what doesn’t. However, viewers unfamiliar with the original will certainly enjoy the film more than those devoted to it. Fortunately, Wiseman’s thrill-a-minute pacing goes far to distract from many of these plot holes and logic breakdowns, leaving the whole picture at least diverting, but not the mind-bending joyride it could have been.