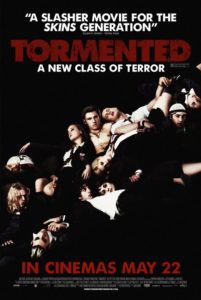 Tormented is about snobby teenagers who receive a bloody comeuppance for behaving badly. One by one, they’re hacked to pieces by an unseen killer as punishment for their crimes, which in this case is bullying. In the end, only the “good girl” survives. Sound familiar? It should, since that basic outline describes the majority of slasher movies, ranging from John Carpenter’s original Halloween to more recent fare like Sorority Row. This one comes from Britain, where apparently they haven’t figured out how to freshen up the genre either. Despite the movie’s negligible innovations, it’s little more than a familiar retread.

The story begins at the funeral of Darren Mullet (Calvin Dean), a prep-school’s class victim who couldn’t take the badgering anymore, so he killed himself. He was an overweight loner known throughout the school as “Shrek” because of his ogre-ish size. After his service, the cool kids play around the cemetery, doting on their richboy leader Bradley (Alex Pettyfer). One seemingly nice bloke, Alexis (Dimitri Leonidas), invites pleasant but selfish social-climber Justine (Tuppence Middleton) to their drunken post-funeral bash. Justine abandons her dorky friends, who stay home to watch Keira Knightley movies, and earns herself a place among the hipsters. All the while, they’re being watched by the ghost of Darren, who had a severe crush on Justine.

Darren wants revenge for a lifetime of hounding from Bradley and his clan, and he’s particularly upset with Justine, who has changed her good girl ways to be “in”. Darren’s vengeance begins with threatening text messages that spook their cool crowd recipients, but then escalates when he starts revealing himself in pseudo-zombie ghost form. After a painfully slow first half, the movie finally lets Darren begin tallying his body count, using creative if nonsensical forms of death. Have you seen movie kills like these? Death in a swimming pool by a ghost-cannonball? Death by wedgy? Death by paper cutter? Death by locker-room towel snap? None of the characters are sympathetic. In the realm of horror movie reasoning, their punishments are warranted, especially after we see a video detailing their horribly cruel treatment of Darren (like relentless beatings and the hiding of his inhaler). But when Darren takes his ghoulish shape, which strangely enough still requires an inhaler, he’s just as unsympathetic. No amount of apologizing will stop him, not even from Justine—who didn’t really pick on the boy so much as ignore it when he was being ridiculed. For Darren, that’s just as bad.

The movie sends a mixed-if-dangerous message. First, it contends that bullying is awful and those who partake should be punished. Agreed. Then it offers a catharsis wherein the victim of bullying enjoys bloody, unreserved retribution, and not even the most sincere regret will stop him. Some teenager out there will probably take the movie the wrong way and think it’s acceptable to cannonball their bully classmates to death, but then again, that kid has problems anyhow. Darren made the choice to commit suicide, but he also made the choice not to tell someone he was being bullied. Maybe ghost-Darren should look in the mirror and realize that he could’ve prevented his own miserable experiences at school by standing up for himself or reaching out for help. Whereas the grisly kills in most horror movies of this sort succeed some unforgivable act, the murderer in this movie seems to be overreacting. Perhaps if Bradley and Co. had killed the unfortunate Darren in their teasing, then the entire experience might’ve felt more defensible.

Shot like a JCPenny commercial by first-time director Jon Wright, complete with needlessly stylish teens and camera movements jerky in that music video way, Tormented is nothing different just because it’s from Britain. If anything, the movie proves that even overseas high school body count movies are filled with annoying characters, all of whom the audience can’t wait to see get their just desserts. Aside from a few gruesome moments that will please gore-happy genre fans, this import from IFC Films gives us nothing different than what we’re seeing here in the United States: A whole lot of horror more concerned about its bloodletting than its message.