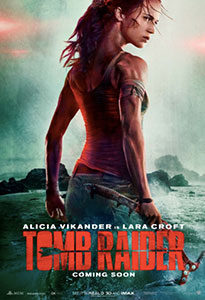 In any Tomb Raider video game, Lara Croft lands death-defying leaps across gaping chasms, climbs impossible rock faces, evades deathly traps, deciphers ancient clues, finds hidden treasure, thwarts bad guys from gaining control of mystical powers, and sometimes even fights ancient supernatural forces. She’s the gamer’s Indiana Jones, except impossibly proportioned and usually ill-dressed for her adventures, at least in the earliest iterations of the game. Tomb Raider video games have been around since the mid-1990s, and the franchise’s popularity spawned more than a dozen games following the now-iconic heroine. Of course, Hollywood sought to bring Croft to life in 2001 and again in 2003, with a hammy Angelina Jolie and her digitally augmented bosom serving up eye-rolling sex appeal and not much else. Those vapid and unforgettable adaptations played like their video game counterparts, relying on conventional mechanics, thin plotting, and virtually nonexistent character development.

The new Tomb Raider film seeks to reboot the intellectual property in the wake of the game’s reinvention. In 2013, a game simply titled Tomb Raider, produced by Square Enix, told Lara Croft’s origin story with incredible cinematics and cutscenes, thoughtful writing, exciting gameplay, and a three-dimensional protagonist whose growth throughout the story brought this player to tears. Moreover, the new version of Croft looked like a human being with an athletic physique, relying far less on the character’s traditional look. Along with its 2016 sequel, Rise of the Tomb Raider, the new game offered an emotionally involving approach to adventure storytelling. At a glance, that’s what the new film sets out to accomplish as well. Lara Croft is played by Oscar-winner Alicia Vikander, a performer known for her weighty roles, and both her narrative trajectory and overall look mirror the Square Enix version of the character.

What’s apparent early on is that screenwriters Geneva Robertson-Dworet and Alastair Siddons used the 2013 game as a template, following its story beats with just enough variation to keep them interesting to those familiar. Most importantly, they’ve kept Lara grounded. If you recall, the 2001 film opens, quite ridiculously, with Jolie’s super-rich version of the character fighting robots with relative ease. Nothing is so simple for Vikander’s version; she’s the Rocky to Jolie’s Ivan Drago. She struggles through every obstacle and feels a physical impact that wears on her. She’s not an invincible superhero; rather, she’s a woman with exceptional bravery and drive. The opening scenes find her trying to make her own way as a London bike courier (a fun chase sequence brings Premium Rush to mind), avoiding the legacy and considerable inheritance left by her father, Lord Richard Croft (Dominic West), a businessman and secretive archeologist who disappeared seven years earlier. After finding a clue to his whereabouts on a hidden Japanese island, Lara commissions a desperate Hong Kong boatman Lu Ren (Daniel Wu) and sets out to find him. 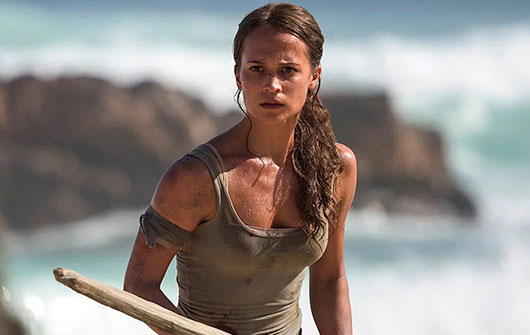 In short order, Lara and Lu find themselves shipwrecked on the mysterious, inaccessible island of Yamatai and held prisoner at gunpoint by Vogel (Walton Goggins), a member of the clandestine organization called Trinity. Vogel has spent years trying to unearth the island’s secret tomb of a dreaded Japanese death queen Himiko—and the time away from his own family has made him desperate—but he’s missing essential clues kept in Richard Croft’s notebook. Around this time, the viewer will begin to notice the familiar scent of Indiana Jones and the Last Crusade. Alas, Lara made the mistake of bringing along the notebook, which comes in handy later as they maneuver the traps inside the queen’s lair (in scenes reminiscent of the three tests Indy must face before acquiring the Holy Grail). There’s a rousing finale, complete with a neat, equally grounded take on the supernatural elements of the story (“Every myth has a basis in reality,” the film reminds us), and the last scenes provide room for a welcome sequel.

Norwegian director Roar Uthaug (The Wave) and his team of three editors create a number of tense action sequences and stunts, most of them supported with CGI. Gamers will recognize moments when Lara must cross over a raging river on a fallen tree or narrowly save herself from plummeting to her death with a climbing axe. Elsewhere, the filmmakers treat the audience like dullards when they replay expositional scenes from earlier in the film. Rather than assume the audience remembers, the editors show Lara remembering some obvious detail from two minutes earlier, or they use a sloppy montage to show Lara putting together a revelatory twist at the end (a lazy technique). Additionally, the opening shots where Richard Croft’s voiceover explains the sordid history of the MacGuffin seem superfluous when, ten minutes later, as Lara looks through her father’s notes, the same voiceover is used.

Despite some overbearing clichés in the plot and eye-rolling need for one-liners, the film makes excellent use of Vikander, giving her more to do than shoot arrows into armed goons and unlock ancient puzzles. For instance, the film avoids thrusting Lara into action hero mode before she can earn it. When she first takes the life of a random thug, it’s not just an anonymous death; the implications of her killing someone are shown on Vikander’s face. Along with her need to discover what her father was looking for, she carries an emotional significance that cannot be denied, despite later cornball lines like, “You messed with the wrong family!” Lara also takes a physical beating, so every punch or fall has a consequence as Vikander cries out in pain or sometimes finds herself simply overpowered—the accumulation of wear and tear echoes the increasing dirtiness of John McClane’s shirt in Die Hard. It’s a realistic character in an outlandish, cliffhanging adventure scenario, with all the trappings and downfalls such a description entails.

Perhaps it goes without saying, but this review’s talk of emotions and dramatics should be qualified by “for a video game movie.” It’s lowbrow fare, after all, and should be viewed as such. But far more than any entry in the Resident Evil franchise or more recently the 2016 Assassin’s Creed feature, the Square Enix Tomb Raider is a video game property that concentrates on creating a character first, a plot second. While the film may not live up to the 2013 game’s heights (two hours of popcorn-munching blockbuster escapism cannot hope to match the investment of a well-written, 10-15 hour game experience), it certainly improves upon the Jolie versions. It’s a long way from elevating based-on-a-video-game films, and it contains plenty of annoying traits (the editing distracts throughout), but Vikander makes a likable, cheerable female badass. The average moviegoer may dismiss the film, perhaps deservedly so, while fans of the video game will recognize it as a worthy effort to recreate the gaming experience for cinema.