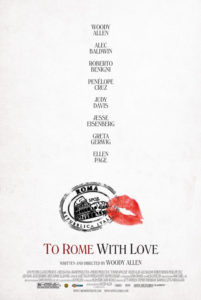 Woody Allen’s cinematic travelogue through Europe continues to Italy in To Rome With Love, an episodic and blithe comedy strewn together from bits and pieces of smaller ideas and arranged in an ungraceful if diverting whole. An anthology of silly and surreal stories assembled in a loose structure on par with Every Thing You Always Wanted to Know About Sex *But Were Afraid to Ask, the film meanders about its series of vignettes with no sense of temporal logic between them. As days pass in one story, hours pass in another, but Allen cuts between them like they’re all happening at the same time. How fitting then that the original title was Nero Fiddled, since Allen himself merely tinkers here with a few novelty ideas and allows nothing but the gorgeous scenery, shot on location in Rome, to link them together.

If there’s one thing Allen loves, it’s a cosmopolitan metropolis. After spending decades in New York City, he relocated his films to London, made brief stops in Barcelona and Paris, and now he explores Rome. Next year, Allen heads to San Francisco. There’s no great meaning or geopolitical observations made by Allen in To Rome With Love, except to acknowledge its beautiful architecture, bustling streets, dreamy cobblestone alleyways, and romantic ambiance abound. His characters, half of whom are American tourists, behave and talk in the manner we’ve come to expect from Allen’s characters, and they’re played by his usual wonderful ensemble of actors. They’re playing neurotic, lovelorn, quick-to-quip intellectuals and pseudo-intellectuals. As comedic asides, Allen even explores the middle class and the upper echelon of celebrity culture. And if one major complaint can be made about the film, it’s that none of these characters represent much about the city itself.

Not that some profound testament about Rome is required because of the title. After all, it’s not as though Manhattan represented every facet of Allen’s beloved New York, just his own romantic perception. Allen’s view of Rome resolves that it’s a city of countless stories, four of which we see play out before us, each more farcical than the last. The film begins with a story in which a young American woman, Haley (Alison Pill), falls for a charming but borderline-communist Italian man, Michelangelo (Flavio Parenti). Months into an affair, and they’re to be married, so her New Yorker parents, Jerry (Allen) and Phyllis (Judy Davis), fly to Rome to meet their future son-in-law and his parents. One day, Jerry, a retired music producer, overhears Michelangelo’s mortician father, Giancarlo (Fabio Armiliato, an actual opera tenor), singing to himself beautifully in the shower. He resolves to make him an opera career, but Giancarlo has dreadful stage fright. He’s only able to sound as good as he does when he’s in the shower. Suddenly a light bulb goes off above Jerry’s head: put the shower on the stage.

A second story follows newlyweds Antonio (Alessandro Tiberi) and Milly (Alessandra Mastronardi), who have just arrived in Rome from Pordenone. Desperate to impress Antonio’s family, who has promised him a new job if their visit goes well, Milly goes out to get her hair done and gets lost in the city, only to have an unexpected run-in with her favorite movie star (Antonio Albanese). While she’s away, a va-va-voom hooker (Penélope Cruz) shows up in their hotel room and announces to Antonio that she’s been paid for, although she was obviously meant as a gift for someone else. But it’s too late, as Antonio’s family barges in and assumes the hooker is his wife. Another story follows a middle-class Italian clerk played by Roberto Benigni, who’s hounded by paparazzi when suddenly the media claims he’s an overnight superstar. What’s he famous for? Nothing—he’s famous for being famous. In a jab against fame similar to the one he made in Celebrity, Allen shows contempt for tabloid stars from Brad Pitt and Angelina Jolie to the Kardashians. Soon Benigni’s character grows tired of all the attention, until the cameras turn to a local garbage man. Of course, in their absence, Benigni’s clerk clamors for the spotlight again.

In the most irregular story, famous American architect John (Alec Baldwin) either steps into his own past or provides a ghostly guardian angel for a young counterpart, Jack (Jesse Eisenberg). Jack lives in Rome with his sweet girlfriend Sally (Greta Gerwig), whose best friend Monica (Ellen Page) arrives to visit after a bad breakup. Sally warns Jack that Monica has a way with men, which Jack doesn’t believe at first. But Page’s tomboyish presence gives way to a series of scenes where her character effectively seduces Eisenberg. Always nearby is John, whose ethereal presence pops into any given scene to give Jack or Sally or Monica advice, perhaps because they are all a part of his memory, or perhaps not. Who can say? Allen’s fantastical use of John is never quite clear, in a similar (but ultimately less satisfying) way to how Owen Wilson’s character mystically traveled back in time in Midnight in Paris or Jeff Daniels stepped off the silver screen The Purple Rose of Cairo.

Allen bounces between these stories in no particular order, embracing a lighthearted tone that’s infectiously carefree and joyously ridiculous. There’s nothing connecting them together aside from the setting, which could easily be replaced by any city. Rome is just the icing on the cake. The soundtrack is comprised of adoring old-timey Italian tunes, including some jazz, and the dialogue is just smart enough to keep us interested. Granted, To Rome With Love isn’t top-of-the-line Woody Allen, but it’s a very funny film containing a number of amusing situations. It’s clear Allen, who’s famous for jotting down ideas on scraps of paper and writing whole sections of his screenplays on whatever material he can get his hands on, simply gathered a few of his favorite minor ideas and stitched them together. An unavoidable feeling of underdevelopment is the outcome, but it’s not without moments of hilarity. However much the film resolves to be a trifle, it’s a trifle with a gorgeous backdrop and a talented cast acting in situations that make us laugh, if we don’t dwell too much on their lack of interconnection and consequence.