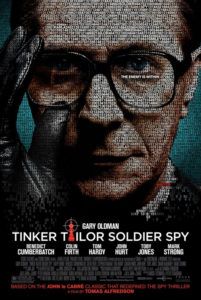 Condensed into a skeletal version of author Jean Le Carré’s classic Cold War spy story, Tinker Tailor Solider Spy realizes an abridged but tonally accurate version of the novel. Written in 1974 and subsequently adapted into 1979’s monumental seven-part BBC miniseries starring Alec Guinness, Le Carré’s book defined the cerebral spy drama in the same way that Ian Fleming’s 007 books later defined the actionized spy yarn. Like most of Le Carré’s stories, this one features several emotionally distant characters acting as cogs in a larger political machine, Britain’s Secret Intelligence Service, codenamed “The Circus”. MI6 agents perform their duties without nifty gadgets or explosive results, carrying out tasks in which the objective remains elusive to the inattentive viewer. And instead of a suave super-spy like James Bond, Le Carré’s reoccurring hero of sorts, George Smiley, comes off icy and distant, but his control and intelligence make him an intriguing protagonist.

Directed by Swedish helmer Tomas Alfredson, whose vampire drama Let the Right One In assured his emergence in the international market and inevitable arrival in Hollywood, the film is presented in the bleakest manner possible. Alfredson dives into the story’s 1970s setting, using a palette of browns and grays to paint his muted and grainy mise-en-scène; his off-center camera moves at an eerily slow pace, and his cutting jumps to seemingly unconnected images in the first-third. But viewers should do their best to soak up every frame with a patient mindset, as there’s much to consider and reflect upon throughout. If you allow your mind to drift or get up for a snack, you could find yourself missing some crucial, understated detail. Writers Peter Straughan (The Debt and The Men Who Stare at Goats) and his late wife Bridget O’Connor churned out a fine-tuned, unforgivably dense version of Le Carré’s novel, complete with the author’s codewords and genre terminology that in this distilled format can be perplexing.

The title comes from that old British nursery rhyme “Tinker, Tailor”, but here it’s used to identify suspects in the search for a Soviet mole who has penetrated the Circus. The film opens with the head of MI6, Control (John Hurt), having received intelligence about the mole, and in response he sends agent Jim Prideaux (Mark Strong) on a mission to Budapest to convince a Hungarian general into defecting. The general knows the identity of the infiltrator, but Prideaux’s mission goes horribly wrong, leaving Control and his top man Smiley (Gary Oldman) forced into retirement by political powers looking for a scapegoat. But those powers quickly realize that Control, who soon dies of a heart attack, was right. In time, they force Smiley back from retirement to investigate the mole from outside the Circus—whose headquarters are located in some forgotten building housed by pale and bookish types.

Among the suspects are genial and chummy “Tailor” Haydon (Colin Firth), indomitable “Soldier” Bland (Ciaran Hinds), duplicitous “Poor Man” Esterhase (David Dencik), and opportunist “Tinker” Alleline (Toby Jones). As Smiley comes to find, he himself was Control’s final “Beggarman” suspect. To conduct his search, Smiley recruits young, straight-arrow Peter Guillam (Benedict Cumberbatch) as his inside man to retrieve intel on the four potential traitors. What they find is that the traitor has been in league with a KGB mastermind, an unseen figure codenamed “Karla”. The labyrinthine plot also sets the suspects out against MI6 courier Ricky Tarr (Tom Hardy), who has been framed as a defector and in turn becomes Smiley’s sole proof of the Circus mole.

Through rampant suspicion and double-crosses, Alfredson’s superb cast rounds out the otherwise thinly drawn characters, as most of Britain’s stockpiled character actors are in attendance. Having just won a Best Actor Oscar last year, Firth shows he didn’t allow the honor to inflate his ego with a nuanced supporting role. Strong and Jones stand out with fiery performances both, whereas Hardy’s is a much more complicated part because of its simplicity. Heading the show, however, is Oldman’s understated portrayal as the perspicuous Smiley, perhaps not as weighty as Guinness’ original, but compelling nonetheless. In the film’s only major diversion from the book, Alfredson and his writers include a scene that informs each of the characters: It’s a flashback to a Christmas party from years before, effectively showing how these men relate and trust one another, but how behind their correlation lies deception and back-stabbing. It’s a welcome departure from the book in this shortened format, although a somewhat standard storytelling device to build characters (which is no doubt why Le Carré would have never used it).

Even five hours on the small screen was barely enough time to adapt Le Carré’s novel, and so no matter how much control Alfredson demonstrates, or how much personality these talented actors give their roles with such limited time, Tinker Tailor Solider Spy never has the depth of the novel or the miniseries. That being said, what Alfredson accomplishes is impressive in its density, yet more of an admirable effort than something to be truly enjoyed. Each of the talented actors gives a fine performance, although no single performance is given room to breathe. Alfredson’s assured and composed direction presents the slow burning story in severe, gaunt dramatic terms and complicated plotting; he captures the mood of the author’s work to be sure, but Le Carré enthusiasts will be left wanting another hour or so of filmic flesh on this skin-and-bones telling.