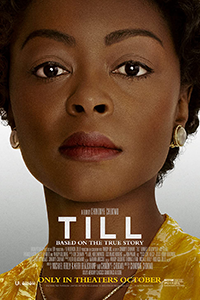 Till is a moving dramatization of Emmett Till’s lynching in 1955 and his mother Mamie Till-Mobley’s activism in the wake of her son’s death. This atrocious hate crime in the Jim Crow South reverberated throughout the Civil Rights Movement, so much so that it’s surprising this story hasn’t been turned into a major motion picture before. Although Till’s murder has been the subject of countless documentaries and books, it has never been the subject of a narrative feature. Then again, the historical account took place in a country where a grand jury refused to indict the murderers, who confessed to the crime to Look magazine not long after a jury of all white male Mississippians absolved them of any wrongdoing; where Congress didn’t enact the Emmett Till Antilynching Act until 2022; and where the very notion of thinking critically about America’s history with racism throws a segment of the population into an uproar. To be sure, it’s not altogether surprising that Till’s name goes unexamined in many American school curriculums. Doubtlessly, this will be the first time many viewers learn anything about Emmett Till. But it’s better late than never when it comes to this accessible film, which explores what happened not so long ago in a country that has changed in some ways, and in others, hasn’t changed at all.