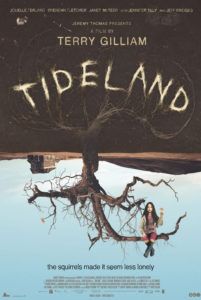 Before Terry Gilliam’s latest film Tideland begins, the director himself appears in black and white. He speaks in an intentionally staid tone and serves the audience with the following disclaimer: “Hello. I’m Terry Gilliam and I have a confession to make: Many of you are not going to like this film. Many of you, luckily, are going to love it. And then, there are many of you who aren’t going to know what to think when the film finishes. But hopefully, you’ll be thinking. I should explain: This film is seen through the eyes of a child. If it’s shocking, it’s because it’s innocent. So I suggest you try to forget everything you’ve learned as an adult—the things that limit your view of the world: your fears, your prejudices, your preconceptions. Try to rediscover what it was like to be a child, with a sense of wonder and innocence. And don’t forget to laugh. Remember, children are strong. They’re resilient. They’re designed to survive. When you drop them, they tend to bounce. I was sixty-four years old when I made this film. I think I finally discovered the child within me; it turned out to be a little girl. Thank you. Thank you. Thank you.”

With that disclaimer preparing me for almost anything, I still found Tideland a demanding, often uncomfortable film. Gilliam’s work sometimes exists on the line where the grotesque becomes high art (specifically with Fear and Loathing in Las Vegas, which is one of the best movies ever made about drug culture). In directing Tideland, Gilliam grabs his audience by the hair and shoves their faces into a toilet bowl filled with trauma, dysfunction, heroin needles, surrealist imagery, and the dreaded risk of pedophilia… Somehow, he makes it work into a poetic-but-disturbing film. That’s the brilliance of Terry Gilliam.

Actress Jodelle Ferland (who was 10 when making this film) is Jeliza-Rose, a young girl whose parents, played by Jennifer Tilly and Jeff Bridges, have created the worst-imaginable environment for a child. In one of the first scenes, the girl prepares a spoon of heroin over the oven and then a needle for each of her parents. Her father calls it a “vacation.” Without mention of school or any other structure in her life besides the drug-frenzied hell hole created by her parents, Jeliza-Rose is tragically prepared for anything. She endures verbal abuses from her mother and rambling talk of “escape” from her father. So only minutes after her mother overdoses, it’s not surprising one of her main concerns is getting a hold of mom’s chocolate bars. At the beginning of the film, Jeliza-Rose is always reading Alice in Wonderland, hinting at how later she has no choice but to escape from reality into her imagination. Her father takes her off to grandma’s house, a forgotten home in the middle of a farmland field, where Jeliza-Rose runs from her putrid reality by escaping into fantasy. Only unlike Alice, her life has not been a fanciful daydream in itself; Jeliza-Rose’s fantasies reflect her troubled existence.

Based on Mitch Cullin’s novel, Tideland exposes a child to some of the most horrific realities imaginable. Several days after arriving at the house, Jeliza-Rose finds her father has been on a “vacation” since they arrived. The audience realizes he’s dead, but she maintains it’s just a prolonged holiday. All alone in the dirty, unlivable home, she spends her days in the fields. There she plays with doll heads that she props on her fingers, imagines squirrels talking to her, and pictures a rabbit hole, not unlike Alice’s, but filled with bottles of liquor and heroin needles. Gilliam’s surreal vision never loses its potency. One day in the fields she meets Dell, a woman dressed in a black beekeepers outfit as though she’s going to an insect funeral. Dell is a private taxidermist; recalling scenes from Psycho, her home is filled with taxidermied wild birds and game. When Dell finds the body of Jeliza-Rose’s father, whom Dell fancied when she was younger, she decides to preserve his corpse for fear of losing him again. 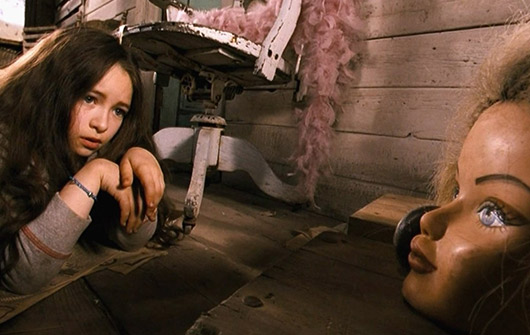 Every character in Tideland is afraid of being alone. Jeliza-Rose stays near Dell’s because there’s no one else to talk to. If she meets someone new, they’re automatically declared to be her best friend. This horribly abandoned girl is so desperate for certainty in companionship that she’ll befriend anyone, even if it might be dangerous. Later she meets Dickens, Dell’s mentally handicapped brother. Dickens is at once sweet and severe. He has a fort that he pretends is a submarine; he calls the train that runs nearby “a shark” and even sets traps for it—for example, placing shotgun shells on the track. Innocent and dangerous, Dickens is the most difficult character to reconcile. He’s twice Jeliza-Rose’s age but equal her mindset. The two eventually play husband and wife; these are the hardest situations to watch, as they would be innocent between two children, and might also be with Dickens, but how can we be sure?  Because we barely know Dickens, or what he’s capable of, we don’t know what we’ll see next. An innocent kiss could turn into something unspeakable if allowed to go that far.

Gilliam’s film isn’t easy. He doesn’t want it to be. At every turn he challenges us. Filmed in 2005, at that point Gilliam hadn’t made a film since 1998’s Fear and Loathing in Las Vegas. His famously failed 2000 project The Man Who Killed Don Quixote was halted after less than a couple weeks in production due to environmental, budget, and bad-luck disasters—the film was never completed. Tideland was actually his second film in production at that point. The Brothers Grimm had just finished principal photography and Gilliam was in a dispute with producers Bob and Harvey Weinstein over its final cut. So, tired of the studio system that had so often plagued his productions, Gilliam took a six-month break from The Brothers Grimm and filmed Tideland.

The actual production of Tideland went virtually incident free. Because the film is fairly uncomplicated visually, at least in comparison to Gilliam’s other work, the shoot was quick. It didn’t require elaborate special effects or sets, so it gave Gilliam a much-needed finished product. But as with The Brothers Grimm (Gilliam’s most obviously lazy film), there are points in Tideland where I could see a desperate director rushing himself. Not that it isn’t understandable, given the tragedy of his Quixote film and the potential disaster awaiting him when he returned to The Brothers Grimm. At that point, he may have rushed certain elements just to prove to himself, not to mention the film community and prospective studios, that he’s still a director capable of bringing a film in on time and at budget.

Tideland opened to Gilliam’s most mixed reviews yet. Most critics hated it. The New York Post compared Tideland’s characters to “bacteria.” Richard Roeper said that he came close to walking out—and for a critic, that’s bad. Other critics named it Gilliam’s bravest work to date, often referring to it as a combination of Lewis Carroll and Alfred Hitchcock. The split came between viewers that could take two hours of emotional punishment without a feel-good ending, and those who couldn’t. For those reviewers who hated the film, I think they failed to see Gilliam’s point: given her life, Jeliza-Rose coped the best way she knew how, with an imagination constructed from the worst possible source. The demented surreality she surrounds herself with is the byproduct of her life. The last scene in the film is ambiguous, but even the most devout pessimist cannot doubt Jeliza-Rose’s situation has the potential of improving. Gilliam, in a way, is the same. Even though he’s been dumped-on again and again, having to struggle with nearly every production since the beginning of his career, he keeps going, coping with whatever the situation brings. In the introduction to his film, he says he found a part of himself in a little girl. By the end of the film, I completely understood why.