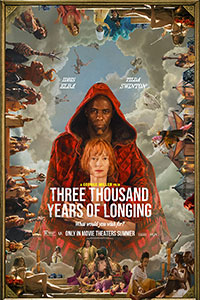 George Miller’s Three Thousand Years of Longing casts a spell with the magic of storytelling. Not only is this what the film is about, but it’s also what drives the narrative. Indeed, Tilda Swinton plays Alithea, a “narratologist” who lectures about how human beings make sense of the world by telling stories. Throughout history, narrative tradition—from fairy tales to mythology and religion—has helped explain the unknown in a structure we can understand. For instance, when the Greeks needed to explain lightning, they invented Zeus, the Olympian god who wielded a mighty thunderbolt. Or when something terrible happens, Christians will say, “The Lord works in mysterious ways.” In other cases, stories have the power to reveal why we feel or what we want. Meanwhile, science has since provided rational answers for many such questions. But even the most skilled academics like Alithea still can’t offer rational responses to questions about desire—nor can most writers unlock love’s countless mysteries. When she happens upon a djinn (Idris Elba) inside a warped old nicknack she acquired in Istanbul’s Grand Bazaar, she listens to his life story, a sprawling yarn beset with heartache, before deciding on her available wishes. Miller’s story-within-a-story structure may seem overly stratified, except it feeds the film’s larger ideas about the importance of storytelling.

This says nothing about how gloriously out of step Three Thousand Years of Longing is with most commercial cinema. Miller rarely plays by Hollywood’s rules, having reinvented the car chase movie with 2015’s Mad Max: Fury Road and the children’s book adaptation with his delightfully weird Babe: Pig in the City (1998). His mind doesn’t work as other filmmakers’ do. And his latest plays most like The Witches of Eastwick (1987)—his grim comedy that introduces three middle-aged women with real-life issues to Old Scratch himself—in its comingling of practical reality and irrational yearning. Miller co-scripted the film with his daughter, Augusta Gore, adapting A.S. Byatt’s short story “The Djinn in the Nightingale’s Eye.” The material is steeped in ancient mysticism from the time of King Solomon to the Ottoman Empire, and it doesn’t stop to explain for those unversed in these tales. The Djinn’s account of his misfortunes unfolds amid royal courts and ornate palaces, and it’s beholden to strange magic—the Djinn’s freedom remains just out of grasp, less he grants three wishes. But that task is not so easily accomplished now that it’s Alithea’s turn to wish. 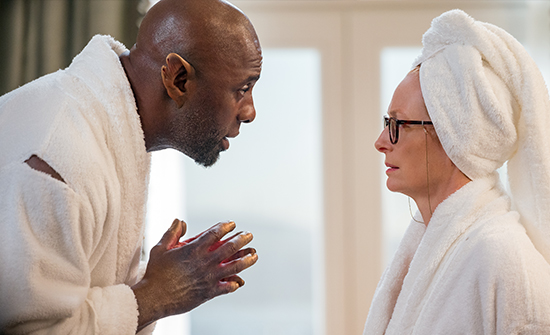 After all, Alithea is well versed in stories about wishes gone wrong and doesn’t trust the Djinn, whom she believes to be a trickster. There’s “no story about wishing that isn’t a cautionary tale,” she tells him, proudly touting her academic knowledge—and prompting the viewer to remember W.W. Jacobs’ “The Monkey’s Paw.” To counteract what the legends say about djinns and genies, he resolves to share his story, in part, to convince Alithea that his services may have a selfish end—his liberation—but they also have never sought to steer the wish-maker into some terrible irony. The Djinn has another wrinkle to iron out: Alithea claims to be content in life. But to escape the curse that constrains him to a bottle, he must make her heart’s desire come true. Alithea insists that she has no real desires—she enjoys her job and has a comfortable home. There’s no need for anything else. Yet, as the film proceeds, it becomes evident that these are the rationalizations of someone who, not unlike the Djinn in his bottle, tells herself stories instead of escaping her container. Her seeming absence of desire stems from her need for control and fear of losing someone she loves.

Still, Alithea compels the Djinn to tell his stories, despite his reluctance as he goes since, over three lengthy imprisonments in his bottle, he’s had thousands of years of solitude to break and repair his mind. The first such imprisonment followed the gorgeous Queen of Sheba (Aamito Lagum), “beauty itself,” who passes him over for Solomon (Nicolas Mouawad) after the Israelite King woos her with an elaborate one-man-band performance. With a single word, Solomon condemns Elba’s character to a bottle, and he spends over two millennia at the bottom of the Red Sea. When Gulten (Ece Yüksel), a lowly concubine of Prince Mustafa (Matteo Bocelli), releases him, his pleading cannot convince her to use another wish and escape the political intrigue to follow. Finally, he’s discovered by Zefir (Burcu Gölgedar), a woman with the intelligence and inventiveness of Leonardo Da Vinci, except she’s one of many wives to a wealthy patriarch who would never allow her to explore her brilliance because she’s a woman. When she wishes for “all knowledge of things useful, beautiful, and true,” the wish, like so many he grants, backfires—not because of his will but because of his colossal bad luck.

Behind pointy ears and a patch of orange beard on his chin, Elba uses his already imposing size—accentuated with occasionally flimsy CGI to make him even taller, more hulking, and thus lumberingly tragic—to give his character melancholy weight. When, in the third act, Alithea suggests their coupling, the film veers into a modern-day setting and laments (relatably so) how loud and politicized everything has become lately. While these factors are yet another reason to escape into a good story, the rules of this final section feel unclear compared to what came before. Along with its several false fades to black that each hint at an ending, some unclear chapter labels, and much talk of electromagnetic fields, the last 20 minutes or so lacks the same emotionally urgent momentum of the Djinn’s accounts. Still, when the credits began to roll, I felt like Three Thousand Years of Longing had just taken me on a journey that inspires comparisons to the works of great visionaries.

In tone and theme, the result plays like Terry Gilliam’s The Adventures of Baron Munchausen (1988), where the fabric between reality and imagination remains tenuous—situated between the Age of Reason and history’s most famous liar. Besides Gilliam, the film brought to mind Tarsem’s The Fall (2008), another film propelled by an imaginative storyteller. To be sure, Alithea admits in her opening narration that she has presented her account of what happened between her and the Djinn in a storybook framework so that we might be able to process what ensues. But at the same time, she acknowledges that her imagination has been getting the best of her lately, complete with hallucinated figures appearing to her alone. She also admits to having an imaginary friend as a child, depicted with sketchlike animation cutouts, as if from a notebook. Whether she’s really seeing the Djinn or has just succumbed to loneliness and madness, Alithea, like the rest of us, wants love, no matter how much she claims to be “solitary by nature.” Swinton’s mannered performance, sharp and guarded, imbues Alithea’s lovelorn past, seen in a flashback, with a hint of tragedy, not the relief she suggests. Indeed, she, too, longs for companionship. 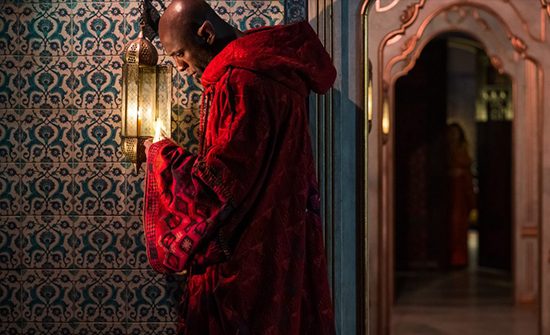 The reported budget of Three Thousand Years of Longing is $60 million, which seems low for a film whose plot spans millennia. Then again, much of the film unfolds in Alithea’s Istanbul hotel room, the Djinn recounting his various wishers, and both of them donning white bath robes. Cinematographer John Seal, who also shot Fury Road, brings a stunning use of light to the Turkish baths populated by full-figured concubines, brightly colored patterned walls, the rich costumes by Kym Barrett, and the Djinn’s wisps of smokey corporeality. At other times, the effects show their cheapness, such as when the Djinn wanders about an Ottoman palace while invisible, and his POV is rendered with a blurry fisheye camera that passes through walls. Miller also enjoys zipping the frame every which way, sometimes in cartoonish movements topped with comic asides that tend to fall flat, other times to accentuate a detail such as a meaningful gulp. Many have called the film “messy,” and they’re not wrong. But there’s a dazzling freedom in messiness that should be admired—especially since so much of what Hollywood produces trends to adhere to a dull stylebook and takes no risks. Miller pushes his production to the visual limit, and more often than not, he incites wonder.

After Three Thousand Years of Longing was over, I felt overwhelmed, exhausted, yet fascinated by what I had just seen. The sensations recalled how I felt after Gilliam’s The Imaginarium of Doctor Parnassus (2009), the Wachowskis’ Cloud Atlas (2011), or this year’s Everything Everywhere All at Once—where the minor imperfections seem negligible next to the filmmaker’s boundless ambition. It’s the kind of film that will only grow in my esteem after future viewings. Miller’s inspired imagery and unconventional structure provide an antidote to the norm in countless ways, despite the film’s elaborate CGI and two leads who are no strangers to tentpole productions. Regardless of missed swings, it’s easy to grasp what Miller saw in the story, which seems to justify the entire vocation of filmmaking. The story settles on the notion that we need the unknown, the promise of another story, and desires that can never be fulfilled—without them, we stop yearning and decay into predictable existence. For Alithea, this means opening herself to love but not entrapping it. Stories, then, have the power to provide an essential, illusory catharsis that ignites rather than extinguishes our hunger for life—a notion that cannot help but resonate with anyone who loves cinema and recognizes its hypnotic powers.