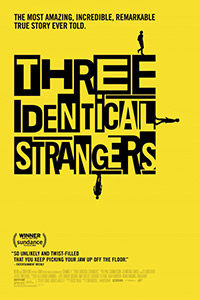 A fascinating documentary of unbelievable circumstances, Three Identical Strangers tells the story of a heartfelt family reunion that transitions into unexpected, occasionally disturbing revelations. After winning the Special Jury Prize at the 2018 Sundance Film Festival—along with a handful of other awards on the festival circuit—director Tim Wardle’s film earns a rare wide release into theaters, avoiding the streaming platform debut to which most contemporary documentaries are relegated. The reasons for this become apparent within the first engaging minutes when the doc’s you-can’t-make-this-up story drops its earliest of many improbable surprises. But what begins as something you might watch on the human interest segment of your local news descends into a shocking exposé and piece of investigative journalism. Eventually, Three Identical Strangers asks lofty questions about free will versus determinism, the nurture versus Nature debate in parenting, and scientific ethics.

In 1980, Bobby Shafran, age 19, went to college in New York and, during his first day on campus, other students quickly noticed he bore an uncanny resemblance to another student, David Kellman. As it turns out, Bobby and David were both adopted and shared the same birthdate. Identical twins separated at birth and now reunited, their story was covered in the local press. That’s when Eddy Galland, another 19-year-old in New York, saw two of himself in the paper. These three identical teen brothers, once together, became a national media sensation. Their faces appeared on the covers of magazines and newspapers, and they made the rounds to every major talk show. With their newfound celebrity, they enjoyed the wild life, partied at Studio 54, and even made a cameo appearance in Desperately Seeking Susan (1985). Most news outlets focused on their shared superficial mannerisms—how they looked alike, moved alike, talked alike, had similar tastes in cigarettes, clothing, and older women. Meanwhile, few people bothered to ask why an adoption agency would ever separate three identical siblings. (Those who wish to discover the film’s secrets for themselves should skip the next paragraph.)

When the various parents of Bobby, David, and Eddy met with the board of the predominantly Jewish adoption agency, Louise Wise Services, to question why their children were separated, they were fed a line about the difficulty of placing triplets with a family. But after some digging, investigative journalist Lawrence Wright uncovered incomplete pieces of the truth. In the 1960s, psychologist Dr. Peter Neubauer launched a study that, initially anyway, appeared to be about child psychology and tracking the stages of development. However, Wright continued to peel back layers of the onion, learning that Louise Wise Services separated other identical siblings in an effort funded in part by the U.S. government. What’s more, many of these siblings, divided as infants, came from biological parents with mental illnesses, and the children developed mental illnesses themselves later in life. Even further, the study revealed that the adopting parents were profiled in suspicious ways, and none of them were told that their adopted child had identical siblings or came from a family with mental illness. More than one interviewee compares the practice of separating children into specific families and studying them like lab rats to Nazi experimentation.

As the story unfolds to reveal the lies and deceptions perpetuated by Neubauer’s scientific study, the viewer is engrossed, while the documentary’s form is less skillful. Wardle, a British documentarian for Channel 4, uses archive photography and clips from the brothers’ television spots (Tom Brokaw and Phil Donahue make appearances). But mostly, Three Identical Strangers employs talking head interviews with the remaining adoptive parents, family members, and reporters, as well as Bobby and David. For much of the film, the viewer notices the conspicuous absence of Eddy among the interviewees, and not-so-subtle hints to “dark” twists build tension early in the proceedings. Wardle also attempts to amplify the mystery with moody, dramatic reenactments, a technique used to better effect in The Thin Blue Line (1988).

After a shift in the context, Wardle repeats the footage of archival TV interviews with the siblings shown earlier. As the viewer learns more about their situation, the earlier pieces of information become more significant when considered in our newfound understanding. Rather than putting his faith in the audience to keep up, Wardle visualizes this in one of those ham-fisted putting-all-the-pieces-together montages, complete with intensifying strings on the score to heighten the moment’s dramatic effect. Despite the unbelievability of the story, somehow Wardle doesn’t trust that the material alone will be enough to enthrall us (he’s wrong), and so he forces falsely dramatic moments to engineer suspense or emotional engagement. The film’s obvious attempts to manipulate our reactions ring false, though the story itself remains mesmerizing. Elsewhere, the director breezes over seemingly important details: The brief mention of Bobby’s alleged involvement in a murder is never adequately explained, for instance.

As many great documentaries do, Three Identical Strangers begins with a kernel of an idea and develops into something else, growing and expanding as it goes along, until the title feels almost inadequate. The subject matter raises questions about whether personalities or physical characteristics are hereditary, but it also shows how parenting style can have a significant impact on a child, genes notwithstanding. Nurture or Nature? It’s somewhere in the middle. Unfortunately, the findings (or even true objectives) of Neubauer’s study were never published, and his data remains sealed until 2066. The audience, so charmed by the story of three young men who suddenly learned they had identical brothers, ends up outraged and saddened by the outcome—and disturbed that other identical siblings involved in Neubauer’s project may still be out there, completely unaware they have a twin. Regardless of the downfalls in his technique, Wardle has found a compelling, often amusing, and rather maddening story.