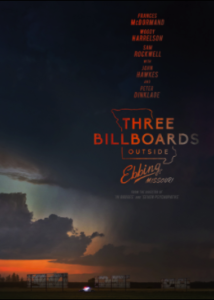 Three Billboards Outside Ebbing, Missouri refers to the trio of stark red placards with black lettering positioned on a stretch of forgotten road near the home of Mildred Hayes. Mildred, played by Frances McDormand in her most substantial role since Joel and Ethan Coen’s Fargo (1996), paid $5,000 for their placement, and she knew what local controversy they would cause. “Raped While Dying,” the first reads. The second follows “And Still No Arrests?” And then the third, “How Come, Chief Willoughby?” The billboards refer to Mildred’s teenage daughter Angela, who was brutally raped, murdered, and set afire seven months earlier. There’s still a patch of blackened grass where her assailant attempted to burn the body. Vilified not for the crime but for his inability to bring those responsible to justice, Chief Willoughby (Woody Harrelson) is nonetheless an honest cop doing his best with little evidence to pursue. Even so, the mounting war between Mildred and Willoughby’s department leads to a blurring of moral boundaries, but also an aching sense that certain wrongs can never be made right again.

Martin McDonagh’s third feature, Three Billboards Outside Ebbing, Missouri follows the Irish playwright’s outstanding debut In Bruges (2008) and lighter follow-up Seven Psychopaths (2012)—though, unlike his first two films, his third does not make use of Colin Farrell’s considerable talent. Emerging from the post-Tarantino style of hitmen characters, punchy dialogue, and pop-culture references, McDonagh’s unique brand of gravitas and philosophizing sets his work apart from others of this ilk. He puts aside most of those familiar contrivances for his third film as writer-director, offering something more serious and less rooted in comedy. Still, he writes films in a way that another playwright-turned-filmmaker, David Mamet, does—McDonagh uses a distinct style of biting dialogue in a plot structured around deliberate scenes that deepen characters and themes. Although his films never feel like a play that has been transitioned to the screen, the dialogue is mannered, and the material contains a metaphoric substance that yearns to be adapted for the stage. 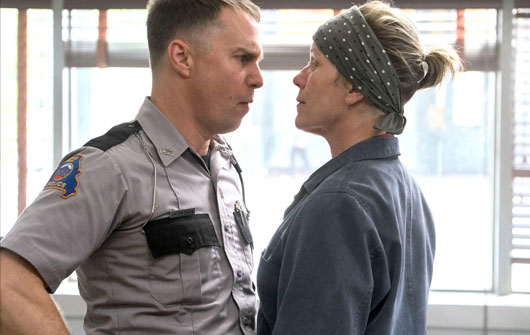 Mildred’s billboards earn her instant attention from the local news, but almost everyone in town, including her teenage son Robbie (Lucas Hedges, from Manchester by the Sea and Lady Bird), wants her to take them down. Chief Willoughby is a respected man in Ebbing, though Mildred has nothing but contempt for the police department that remains “too busy torturing black folks” to solve her daughter’s murder. She’s referring to Officer Jason Dixon, played by Sam Rockwell in a complex performance. Allusions to Dixon’s vicious crime (an open secret, apparently, for which he was completely absolved) are compounded by his unabashed bigotry and abuse of his authority. He’s also a moron, seemingly irredeemable, and dependent on advice from his rather awful mother (Sandy Martin). But McDonagh, regardless of his dramatic cynicism, remains willing to accept that people can change. To be sure, the film begins as Dixon defends Willoughby’s name, jealously reacting and waging a personal, unthinking war against Mildred. Somehow, and quite unexpectedly, McDonagh layers Dixon, allowing him to grow as a human being through the course of the film.

If the events of In Bruges are any indication, McDonagh isn’t interested in satisfying Mildred’s righteous pursuit to gratify the audience’s initial sense of Medieval justice. Life isn’t that easy. Black and white absolutes do not exist—McDonagh’s world functions in a state of gray. Attacking the police does not get Mildred what she wants, while the police are not merely a band of racist yokels sitting on their hands. Eventually, Mildred, in her unflinching pursuit of her daughter’s killer, is revealed to hold nothing else sacred, and she becomes cruel instead of funny and justified. When Willoughby explains that the DNA found on Angela matches no one in the criminal database, she says “Then pull blood from every man in the country,” regardless of the civil rights implications. And when Willoughby tries to appeal to Mildred’s sense of decency given his grim diagnosis of pancreatic cancer, she does not budge on her billboards; in fact, she wanted to get them up before he died: “They wouldn’t be so effective after you croak, right?” Gradually throughout the film, our initial perceptions begin to blur—no longer is Mildred a hero of the people nor the police a band of unsympathetic tools. No wonder the fictional town is called “Ebbing,” another word for degeneration.

Our initial enthusiasm for Mildred’s mission ebbs after being exposed to her sometimes bitter methods. Some of her more acidic interactions remain hilarious, such as when she compares the Catholic priesthood to the gang law of the Crips and Bloods, suggesting every man who remains of the cloth is culpable for the crimes of their fellow priests. But consider her heartless behavior when she agrees to have dinner with James (Peter Dinklage), whom she barely sees as a whole person. And this says nothing of Mildred’s final words to Angela before her death. McDonagh’s film complicates every character and emotion so that even supporting roles seem consequential. When Mildred first rents the billboard space, she visits Red (Caleb Landry Jones), a squirrelly weirdo that receives a nasty beating from Dixon for his functionary role in her billboards. Later, when both of them are in the hospital, Red demonstrates an unlikely act of kindness that suggests how the film’s characters are each more than they appear. 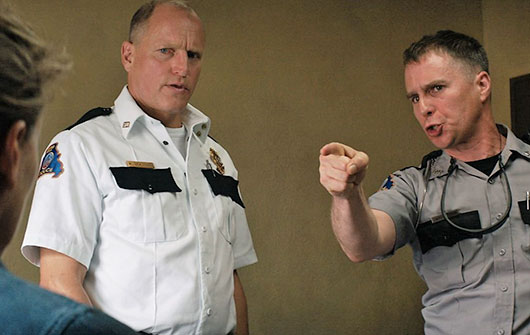 McDonagh drives his audience down a winding road of anger and forgiveness, unhealable wounds and personal growth—all with his signature use of vile language and harsh characters. The casual use of the word “cunt” between Mildred and Robbie may shock, whereas one exchange between Dixon and his despicable mother about the “person-of-color-torturing business” is bound to offend. Nevertheless, McDonagh also has time for considerable beauty in his film. The loving marriage between Chief Willoughby and his wife (Abbie Cornish) affords a few tender scenes, leading to a turn that allows several characters to change, some of them hardening their resolve, some questioning their methods. McDonagh also engages in considerable formal beauty. Ben Davis’ cinematography never feels intrusive or showy, though there’s an involved extended take where, in a delirious state of mourning and anger, Dixon marches across the street to throw someone out of a window.

In today’s trend of social media outrage and moral absolutes, McDonagh considers the complexity and humanity behind those on both sides of the argument. His willingness to examine the depth and potential of his characters may not prove popular or emotionally satisfying as a good revenge story ought to be, but then, Three Billboards Outside Ebbing, Missouri isn’t a revenge story. Though later on the film suggests that Angela’s killer may be captured, nothing could ever be so crystallized by this winding narrative and its shifting alliances. And while sharp performances from  McDormand and Harrelson take center stage at first, Rockwell’s character takes the longest and most challenging journey—both for his character and the audience—though all of them are granted incredible dimension in McDonagh’s hands. His most contemplative and severe film to date, Three Billboards Outside Ebbing, Missouri weighs how notions of righteousness, truth, rage, and authority cannot remain unqualified, regardless of how unsatisfying or incomplete such notions may be.