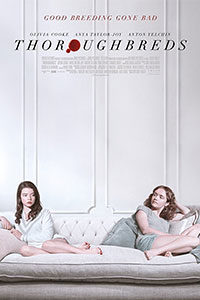 Thoroughbreds marks the debut feature of writer-director Cory Finley, a 28-year-old, St. Louis-born playwright whose assured entrance into filmmaking manages a number of tricky maneuvers. For starters, he makes his audiences feel something for characters incapable of empathy. Amanda and Lily, two teens lacking a few instruments from the usual toolkit of human emotion, conceive a murderous plot through ruthless scheming and cold logic. They’ve been brought to life by Olivia Cooke (from Me and Earl and the Dying Girl, Ouija) and Anya Taylor-Joy (from The Witch, Split), actors whose considerable talent may not be screamingly obvious until this moment. Although comparisons to Heavenly Creatures (1994) are warranted, the relationship at the center is more complicated; whereas Peter Jackson’s film featured teen girls with emotions that bloomed uncontrollably in each other’s presence, the friendship between Amanda and Lily contains a negative space that proves thornier. Finley sharply observes Amanda and Lily to distinguish their individual brands of psychopathy, offering insight into their characters without painting them as mere teenage monsters.

Amanda and Lily are former childhood friends, now estranged. But Amanda’s mother (Kaili Vernoff) has paid Lily to help her daughter socialize, using SAT tutoring as the pretense for a “play date.” Amanda is somewhat controversial in their school, we learn, as she faces animal cruelty charges for her briefly glimpsed actions toward a horse (think The Godfather). Understandably, Lily rekindles their friendship with some reluctance, especially after Amanda confesses she feels nothing and, since her earliest years, has taught herself to fake emotions to appear normal. Amanda says she feels no joy, hatred, sadness, love, or remorse, leaving her with a chilly, empty, yet brutally frank disposition. She is not evil; she is empty. Lily soon acclimates to Amanda’s manner and realizes the perks of having a brutally honest friend incapable of being offended or judging you. Moreover, Amanda seems to reflect something Lily is just realizing about herself. “Empathy isn’t your strong suit,” Amanda tells her, and then teaches Lily “the technique” (a method of tricking the body to cry on cue).

Finley, after graduating from Yale, tutored privileged students in and around Connecticut, forming the basis of Amanda and Lily. He observed sometimes stifling if opulent environments that shape young people through intimidation, oppressive love, expectation, and violence, and then wrote his story into a play. That unproduced play was made into Thoroughbreds, a film that develops into something worthy of a description as darkly comic, Hitchcockian in the realm of Rope (1948) or Strangers on a Train (1951), and bearing elements of a thriller. But Finley keeps the violence and gristly stuff off-screen, concentrating on his characters. As Lily is frustrated with her stepfather Mark (Paul Sparks)—a mean, materialistic, and domineering douche bag—Amanda questions why she doesn’t just kill him. And after much deliberation, Lily resolves to use Amanda’s penchant for calculated thinking into a murder plot. 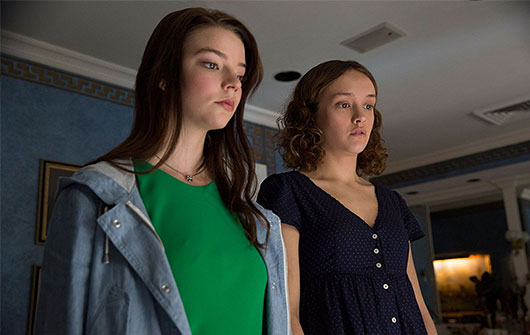 Even if you enter the film without realizing Finley is a freshman director, as I did, you will nonetheless find yourself impressed by his control behind the camera. Unlike other playwrights-turned-directors, Finley shows no evidence of clinging to his roots on the stage, as he uses every corner of the frame, exploring the widescreen aspect ratio through creative blocking and a narrow depth of field. Cinematographer Lyle Vincent glides the camera around the primary location of Lily’s family estate, fluidly moving the frame down hallways and across elaborately decorated rooms. Some of the film’s most dynamic shots involve an in-focus character in the foreground while, in the background, a fuzzy character does something crucial. The mannered, deliberate approach to the visual is echoed by the aural. Erik Friedlander’s odd yet fascinating score of electronic ticks, Japanese woodblocks, and brief tempos brings an energy that reminded me of the most frantic scenes from Jon Brion’s score to Punch-Drunk Love (2002).

As Thoroughbreds introduces one major talent in Finley, it marks the final feature film appearance of another. The late Anton Yelchin appears as Tim, a creep with a past in statutory rape and drug dealing to minors. Even so, Tim somehow remains sympathetic and human next to Amanda and certainly next to Lily. (Even though mice are vermin, it’s easy to feel sad for a mouse in the cat’s paw.) The girls hire, nay, blackmail and hire Tim to kill Lily’s stepfather. Tim is desperately out of his depth, pathetic, and victimized by Amanda and Lily. Even so, I would caution against viewing these young women as nothing more than psychopaths or representatives of teenage amorality, as other critics have. Finley seems to be interested in exploring the not-always-cut-and-dry reasons behind their choices, which separates the material from its characterization as American Psycho-with-teens.

After premiering at the 2017 Sundance Film Festival, where Focus Features picked it up for distribution, the film’s original title “Thoroughbred” was changed to its current namesake. Many critics have noted the change and questioned why, since Amanda and Lily seem quite similar, and the singular version of the adjective could describe an entire breed. Both young women come from entitled white homes in the Connecticut suburbs, have empathy issues, and participate in a plot to kill Lily’s stepfather. However, the final scenes in the film suggest that Amanda and Lily are a breed apart, and while each is a pure version of their type, they are distinctly different types. It’s a sly contrast that elevates the film from a story about teen psycho killers to something far more empathetic and challenging to the audience. Afterward, ask yourself if you left Thoroughbreds with empathy for either character. If not, perhaps the limits of your own empathy require some examination.

“Not feeling anything doesn’t mean I’m a bad person,” Amanda explains. “It just means that I have to try harder than everyone else to be good.” Indeed, psychopaths are human beings too, and there’s a tragic quality about someone who knows she cannot produce emotions and yet understands her reactions are abnormal. By the end of the film, Finley makes us question what we’ve seen and what we’ve become. Have we taken scant onscreen evidence and passed undue judgment on Amanda for her alleged crimes, as her classmates have done? I think the potential exists to watch Thoroughbreds and feel disgust over its central characters. Amanda’s perceived cruelty comes from a place that seems, as she explains it, quite logical. Her explanation for what happened to the horse, for instance, may have resulted in horrifying physical violence, but for reasons that progressed wildly from a humane source. Finley proposes that we reconsider what makes someone a psychopath. Is it merely a lack of empathy? Or is it one’s willingness to embrace an inner void to exploit its gains?