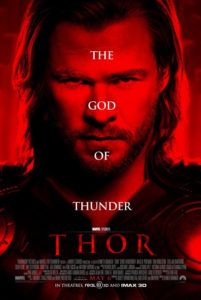 Marvel Entertainment’s production of Thor may be the studio’s best demonstration of their capacity to adapt comic books to the screen with integrity for both source material and sheer entertainment value. Not that the result represents the finest comic-to-film effort from Marvel’s growing Avengers franchise, but it’s certainly the most unconventional in terms of what audiences expect from the genre, and the most challenging of the Marvel characters to imagine on film. Brought to life by unlikely yet ideal director Kenneth Branagh (1996’s Hamlet, the Sleuth remake), the picture contains heightened scenes of Shakespearian melodrama, although Branagh also infuses plenty of comic book style, imbuing cockeyed camera angles, lighthearted humor, and a profusion of special FX to give this other-worldly spectacle some raw blockbuster escapism.

Unlike your typical superhero that dons a costume and stops crime because of some newly developed ability or dramatic backstory motivation, Thor (Chris Hemsworth) hails from the Asgard of Norse mythology, where he serves as a warrior god. Screenwriters Ashley Miller, Zack Stentz, and Don Payne employ smart, economic storytelling in the first half-hour to establish Thor’s origins, how Asgardians travel about on their rainbow bridge Bifrost, and why the hero is ultimately banished to Earth in human form by his father, Odin (Anthony Hopkins). The opening scene takes place in New Mexico, where astrophysicist Jane Foster (Natalie Portman), her mentor Dr. Erik Sevig (Stellan Skarsgard), and sarcastic intern Darcy Lewis (Kat Dennings) witness a bizarre disturbance, and while driving to determine its source, they bump into a massive bearded man who seemingly fell from the sky. From here the tale backtracks into fantasy, telling how Thor landed on Earth.

Like Superman, Thor’s power has few earthly limitations, as surely nothing on our planet compares to battling the celestial bad guys he’s accustomed to. But to teach his war-hungry son some much-needed humility, Odin strips away Thor’s powers and embeds his son’s weapon of choice, the hammer Mjolnir, into a rock until Thor becomes worthy enough to remove it. The story bounces back-and-forth between Earth and Asgard, where Thor’s sinister brother, and eventual archnemesis, Loki (Tom Hiddleston), has taken control of the kingdom from Odin and orchestrated a war with the deathly Frost Giants, led by their king Laufey (Colm Feore). Thor’s warrior cohorts—Sif (Jaimie Alexander), Volstagg (Ray Stevenson), Fandral (Josh Dallas), and Hogun (Tadanobu Asano)—attempt to find a way to return their friend home, providing slight comic relief along the way. Meanwhile, an underwritten romance blossoms between Jane and Thor, giving him new motivations beyond the glory of battle, and she a better understanding of how science and Norse myth are one in the same. 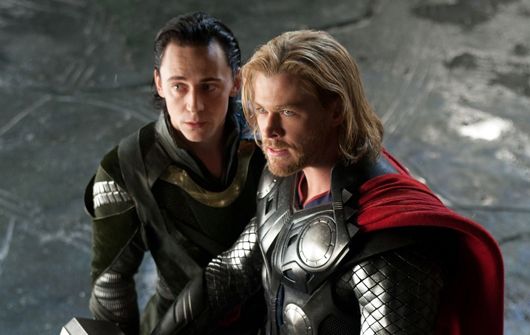 Having bulked up for the role, relative newcomer Hemsworth, best known as George Kirk from Star Trek, captures Thor’s larger-than-life personality with charming arrogance, adding the script’s lacking personality during his character’s transformation from violent brute to wise hero. Another actor may have gone over-the-top with the performance, but Hemsworth nails it. Most of the supporting cast (Portman, Skarsgard, Dennings, Stevenson) is serviceable, more notable for their presence as celebrities than their performances. Take Rene Russo’s appearance on the margins as Odin’s wife, Frigga; her role seems like most of it ended up on the cutting room floor. However, there are a few standouts: Anthony Hopkins adds considerable weight and authority to Odin; Idris Elba’s Heimdall, the brooding guardian of the Bifrost, has a significant subplot. But the real breakout belongs to another virtual unknown, Hiddleston, who’s worked with Branagh in the past on BBC projects; he superbly renders Loki as a mischief-maker with considerable emotional drives, as opposed to evil for evil’s sake.

Through the film’s various interdimensional realms, it’s multitude of characters, and assorted plot elements, Branagh holds the story together with impressive control, although another ten or even twenty minutes of footage to flesh out the central romance or the Earth-set scenes might have helped the occasional choppy feel. Still, with so much going on, we’re never confused about what’s happening or why, and that’s as a result of good storytelling. Unexpectedly, the most cohesive scenes emerge in Asgard’s royal court, where Branagh renders a regal costume drama with pitch-perfect intensity. Fantastic costumes designed by Alexandra Byrne, within production designer Bo Welch’s immaculate sets, glow with the golden opulence of Asgard. Other sets, such as the rippling colors on the Bifrost or the icy wasteland of Jotunheim, home of the Frost Giants, are just as striking. A vast amount of intergalactic wonders, huge monsters for Thor to combat, and action scenes are rendered via CGI, and the production values are what we’d expect from a tentpole summer blockbuster.

In comparison to everything off-world, the Earth scenes feel flat and less interesting, but that goes without saying; how could a dusty New Mexico town compare to the extravagance of Asgard? As a mortal, Thor experiences some priceless fish-out-water moments, behaving as though he’s still an entitled prince, until he realizes his godly strength has been reduced and he can, in fact, be harmed. Subplots involving S.H.E.I.L.D allow for plenty of tie-in material for Marvel’s growing superhero team venture, The Avengers, due summer 2012. Agent Coulson (Clark Gregg) “borrows” Foster’s research on wormholes, which she suspects connect our world to Thor’s, and then erects a research facility around Thor’s fallen hammer. Jeremy Renner makes a brief, all but nameless, tidbit appearance in his announced role as Hawkeye, a wiseass archer who usually wears a purple getup, but doesn’t here. Audiences familiar with Coulson will recognize the carryover of his scenes from the Easter Egg in Iron Man 2, and the post-credits sequence here gives comic aficionados an exciting hint as to where the plot of The Avengers will go.

Unless you’ve been under a rock since 2007, you’re aware that Marvel has been slowly building toward an ambitious movie crossover featuring characters and actors from Iron Man, The Incredible Hulk, and the upcoming Captain America: The First Avenger. In some ways, Thor feels more like an obligatory building block to that film than a standalone franchise. But then, this character, though present in Marvel Comics since 1962, has never been as popular as Spider-Man, the X-Men, or the Fantastic Four. With the inevitable success of Thor, that’s bound to change and create some mainstream awareness of Thor’s history in the comics, and the character’s certain potential for stand-alone sequels. Branagh, delivering more than anyone likely expected from a Thor comic adaptation, achieves a hugely entertaining success through his obvious understanding of both comic book and Norse mythologies and how to make them involving and relevant to modern audiences, rather than the campy and silly mess that could have resulted from such subject matter.