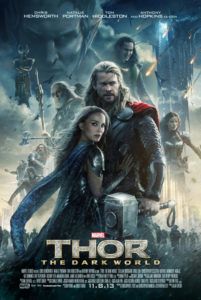 The first, and hopefully last, significant disappointment in Marvel Studios’ ongoing Avengers series, Thor: The Dark World proves diverting but largely inconsequential in its deficient dramatic stakes and humdrum conflict. Following Kenneth Branagh’s original from 2009, the sequel solo adventure of Asgard’s favorite hammer-throwing hero feels plagued by the prevailing sense that we’re seeing an average but watchable episode of our favorite television series. Perhaps because its director, Alan Taylor, has spent most of his time behind the camera on TV projects, chiefly Game of Thrones, Mad Men, and The Sopranos—excellent credits, to be sure, but not film. Accompanying Taylor are screenwriters Christopher Yost (whose credentials consist of various animated superhero shows, including X-Men: Evolution), as well as Christopher Markus and Stephen McFeely (Captain America: The First Avenger). But all of this television and Marvel experience delivers an entertaining movie nonetheless, even if it can’t compare with other entries in the ever-expanding Avengers universe.

Another prologue narrated by Anthony Hopkins’ Odin tells of an ancient evil race called the Dark Elves and their leader Malekith (Christopher Eccleston), a dull villain who thousands of years ago attempted to bring the Nine Realms (Earth among them) into darkness by unleashing the Aether, another “ancient force of infinite destruction” in the universe that remains narrowly described or understood by both the film’s characters and audience. The Dark Elves were supposedly wiped out by Thor’s granddad, but Malekith has survived, awakened when who else but Thor’s estranged girlfriend and brilliant-beyond-reason astrophysicist Jane Foster (Natalie Portman) stumbles onto the Aether, a swirling red metallic substance that bonds with Jane as a host. Thor dashes to her rescue in London, where she’s now based, and brings her to Asgard for protection, and there they try to settle their lover’s spat. Meanwhile, Malekith launches a devastating attack against Asgard to recover the Aether. To stop Malekith, Thor has no choice but to reluctantly free his supervillain brother, Loki (Tom Hiddleston), from his Asgardian prison, where he’s been ever since his attack on humanity in The Avengers.

Thor himself, charmingly overconfident and chock full of bombastitude, feels dialed back this time around, his character curiously insignificant in many of the anonymous, uninvolving spaceship dogfights and hand-to-hand scuffles between Asgardian and Dark Elf combatants. Thor’s larger-than-life personality is also overshadowed by the film’s incessant dependence on Jane’s plucky and sarcastic intern Darcy (Kat Dennings), and her Brit intern Ian (Jonathan Howard), both unfunny and before long just annoying. Criminally underused is Chris O’Dowd, Jane’s blind date character from early in the proceedings who appears briefly for additional comic relief. Loki, meanwhile, steals the show, his devilish smile and shifty glares intact. Rancorous toward his adopted family, Loki seems to warm up to his soured brother against their common enemy, but he’s never too far removed from his villainous mischief-making and shape-shifting antics. Also returning are Bifrost overseer Heimdall (Idris Elba), Thor’s mother Frigga (Rene Russo), romantic rival Sif (Jaimie Alexander), and the Warriors Three (Tadanobu Asano, Ray Stevenson, and Zachary Levi). 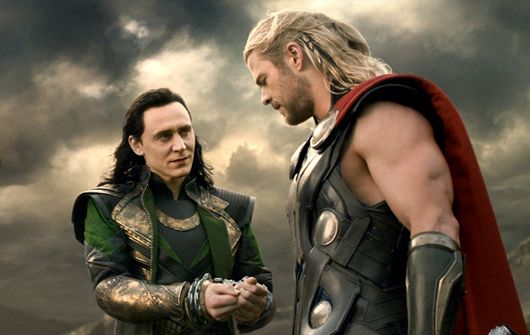 After some sluggish pacing in the first two-thirds, Taylor fails to ratchet up energy levels during the dimension-jumping finale wherein Thor and Malekith go head-to-head in Greenwich, London, as overhead the Nine Realms align, ripe for Malekith, who wants to shroud them all in darkness with one blow of Aether. At the same time, Jane and her now-crazed colleague Dr. Selvig (Stellan Skarsgard), have somehow whipped up a multi-dimensional phasing device that opens invisible portals, unpredictably teleporting our opponents to other realms. How Jane and Selvig slap this stuff together in a jiff is clarified about as much as our questions about how the Aether works, both frustratingly thin story conveniences, explained little but employed to propel the plot forward and offer some nifty effects. But then there’s very little sense or interest to be found in Malekith, the Aether, or Jane’s thin scientific explanations. The whole finale feels sleepy and tiresome.

Going against Marvel’s usually robust treatment, it feels as though less attention was placed on story economy and character in The Dark World—even CGI and special FX have an inconsistent quality. Notice the last scene between Odin and Thor, or the various shots of characters on vast landscapes in another realm; these look like cheap green screen work at times. The studio announced a hefty regiment of reshoots as recently as a couple of months prior to the film’s release, and a few scenes show evidence of a post-production rush job. Of course, these remarks are only relevant when compared to previous Marvel Studios productions—including the original Thor—which are always spared-no-expense gorgeous. In all other arenas, the film looks top-notch. Practical makeup and costumes are wonderfully elaborate, however; and the ornate, golden sets look amazing, as though only gods could inhabit them.

For some, Branagh’s film was thought to be a disappointment; members of that camp will feel like The Dark World is a further step down. Still, no measure of quibbling about an otherwise diverting superhero film will matter to die-hard fanboys and Marvel enthusiasts. The basic elements are in place for an entertaining show. Though he has less to do, Hemsworth remains an imposing leading man; likewise, Portman is a capable leading lady, and Hiddleston the kind of antagonist crowds love. But if Marvel has resolved to cut costs by not hiring A- or even B- list film directors in favor of TV talent with lesser prestige (not to mention a smaller paycheck), one cannot help but worry about Marvel’s other questionable choices (such as hiring You, Me, and Dupree directors Anthony and Joe Russo to helm Captain America: The Winter Soldier, due in 2014). While each new solo superhero movie is ultimately building toward something bigger, the filmmakers should still attempt to assemble an individual stand-alone film, as opposed to just the next episode in the Avengers saga.