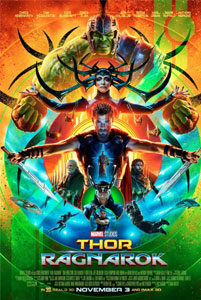 Marvel Entertainment’s Thor films have taken a similar trajectory as their three Iron Man features. Hitting a high note early on, the second film wavered, giving way to a self-referential and winking third entry in the franchise-within-the-franchise. With two entries to usurp, Iron Man 3 (2013) distinguished itself from its predecessors by giving a distinct writer-director, Shane Black, some considerable creative control, allowing him to apply his own brand of comedy-action-noir to the proceedings, not unlike his own Robert Downey Jr. career-restarter Kiss Kiss Bang Bang (2005)—complete with the author’s frequent signatures like a Christmastime setting, voiceover, and an entrenched mystery. Similarly, Thor: Ragnarok remains an MCU outlier for its unmistakable directorial voice—an entirely too rare occurrence in MCU films—here attributed to New Zealand’s Taika Waititi, an idiosyncratic and playful filmmaker whose approach far outperforms the two previous Thor titles. Kenneth Branagh’s 2011 original boasted a pseudo-Shakespearian tale of familial betrayal combined with fish-out-of-water humor; whereas Alan Taylor’s Thor: The Dark World (2013) remains perhaps the dullest of all MCU titles, and the only one this critic never wants to revisit.

Waititi is the latest in a string of independent filmmakers to break into the Hollywood blockbuster. An unfortunate trend today finds young directors starting small and being consumed by megabudget entertainment. Collin Trevorrow went from the modest oddball comedy Safety Not Guaranteed (2012) to helming Jurassic World (2015), followed by a depressing fan veto from Star Wars IX after this year’s ill-received The Book of Henry. Jordan Vogt-Roberts made a coming-of-age indie in 2013 called The Kings of Summer, followed by the loud Kong: Skull Island. Horror director Adam Wingard achieved his prime with microbudget titles like You’re Next (2013) and The Guest (2014), but next finds himself overseeing Warner Bros. crossover Godzilla vs. Kong in 2020. The examples go on and on, and in each case, the filmmaker either hasn’t yet established their voice or has given up what made their smaller work significant in order to direct a massive popcorn-munching crowd-pleaser. Where Waititi differs from his contemporaries is that, despite the production’s huge price tag, and the potential for Marvel to completely override his strange impulses, Thor: Ragnarok still feels very much like “a Taika Waititi film” in the best ways. Fans of Waititi’s weirdo yet charming comedies such as the underseen Boy (2010), the horror spoof What We Do in the Shadows (2014), and last year’s outstanding Hunt for the Wilderpeople (2016) will feel right at home in his transition to superhero entertainment. 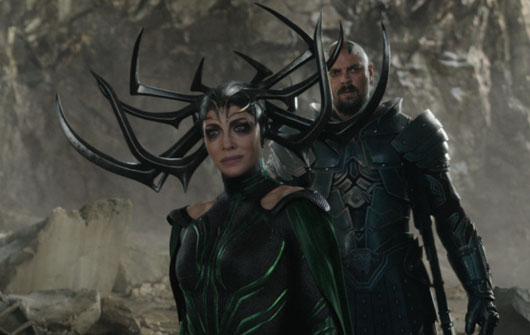 The film’s first fifteen minutes resolve some lingering questions as to Thor’s whereabouts following Avengers: Age of Ultron and Doctor Strange, and his conspicuous absence from the crossover film Captain America: Civil War. Chris Hemsworth, boasting his character’s meaty physique and comic vanity, returns as the God of Thunder to the gilded kingdom of Asgard, where his mischievous brother Loki (Tom Hiddleston) has been playing Odin in disguise. After exposing his brother and reconnecting with his dying father in Norway, Thor learns he’s not Odin’s first-born child. That honor goes to Hela (Cate Blanchett), the Goddess of Death, who has been exiled by her father. With smoldering eyes, juicy line readings, and an imposing headdress, Blanchett savors the villainess role, easily the most intimidating and compelling Marvel villain in recent memory. Or perhaps it’s just Blanchett’s incredible screen presence. In any case, Hela exiles Thor and Loki, and then returns to Asgard to rule over her newfound underling Scourge (Karl Urban) while also searching for Heimdall (Idris Elba), who has stolen the key-like sword to the Bifrost, the kingdom’s intergalactic portal. These Asgardian scenes occupy the first third and last half-hour of Thor: Ragnarok, but the meat of the film occupies a far stranger setting.

Thor finds himself relegated to the garbage planet Sakaar, a colorful combination of Mad Max Beyond Thunderdome and the cantina scenes from Star Wars, where he’s captured by “Scrapper 142” (Tessa Thompson). She’s a hard-drinking former Valkyrie warrior of Asgard, now serving at the behest of Sakaar’s resident Grandmaster (Jeff Goldblum, in his full, eccentric Goldbluminess)—a godlike ruler who entertains his underlings with epic gladiatorial bouts. The planet contains countless alien faces, many of them achieved with practical makeup effects or elaborate, brightly colored armor, complete with laser blasters and bizarro technology (a melting stick reduces one alien to a puddle of blue ooze). There’s a sense of wonder and discovery on Sakaar, as we explore a world inhabited by a vast interplanetary population that hints at the larger universe found in Guardians of the Galaxy and its sequel. Best of all, it doesn’t look like a CGI-created alien landscape—at least, not until later, when the planet becomes an action set-piece. Capturing that Jabba’s Palace vibe, the Grandmaster, now with the conniving Loki by his side, puts Thor in the ring against the planet’s current champion, none other than the Incredible Hulk (Mark Ruffalo), who has remained in his enraged green form since Age of Ultron.

By expanding Hulk’s vocabulary from grumbles and roars to broken English and petulant insults, the film taps into the same humor dynamic of macho competitiveness between Thor and Hulk that Joss Whedon covered in The Avengers, albeit to a much sillier degree here. Insults like “baby arms” and “you’re the stupid Avenger” fling back-and-forth before the two realize they’re on the same side. Although Thor: Ragnarok‘s script is credited to Eric Pearson, Craig Kyle, and Christopher Yost (all of whom have various, far less interesting credits in Marvel films), Waititi obviously did some uncredited rewrites and on-set improvisation, resulting in several hilarious moments between motion-capture characters—including his own Kiwi-accented Korg, a show-stealing rock-thing with a soft-spoken, awkward personality. There’s also a funny-if-immature streak of lewd humor referencing the Grandmaster’s pronunciation of “Ass-guard,” his orgy cruise ship, and an interdimensional portal called the Devil’s Anus, lending to the film’s offbeat-ness. Frequent Waititi collaborator Rachel House also appears as Topaz, the Grandmaster’s right-hand, who believes wholeheartedly in excessive force for all situations. All of these elements combined lead to the film’s over-two-hour runtime breezing by with laughter, color, and often sheer bewilderment. 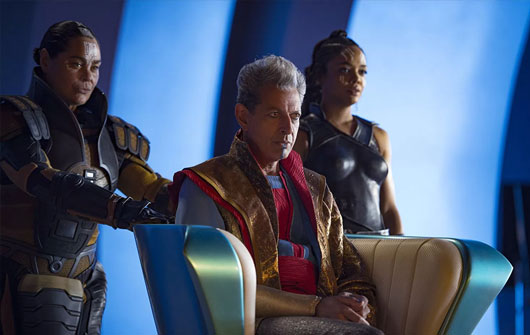 To be sure, the film sometimes feels more like a comedy than another in a tired line of superhero extravaganzas, and that’s a good thing. Waititi makes excellent use of Hemsworth, who balances being a ridiculous blowhard with a touch of vulnerability. Our hero is weakened early-on when Hela emasculates him by destroying his prized hammer, leading to a lightning-and-thunder-infused showdown alongside Hulk, Loki, and the newly reformed Valkyrie (perhaps a future love interest, given that Natalie Portman’s Jane is dismissed with a line of dialogue). And, quite unexpectedly so, the finale proves exciting, with a cheer-worthy duel between the hammerless badass Thor and Blanchett’s intimidating villain. Marvel has a bad habit of dragging out their third acts with overlong action sequences that numb the brain. Fortunately, Waititi’s production makes excellent use of Led Zepplin’s 1970 hit “Immigrant Song” to enliven the proceedings, offering a final battle that feels rousing instead of a sleepy CGI mess (try getting through the last half-hour of The Dark World without dozing, I dare you). Elsewhere in the film, former Devo bandleader Mark Mothersbaugh provides a retro-sounding synth score, inflected with all the energy of a 1980s arcade game—or at the very least the postmodern pastiche music of Netflix’s Stranger Things—giving the entire film the air of a fun-loving, lower budget sci-fi flick.

Whereas the MCU’s homogenized qualities permeate most of their output, the Marvel machine must continue to empower directors who are willing (and capable) of leaving their own stamp on the material; otherwise, their films risk sinking to the lows of the DC Extended Universe. Of course, every MCU feels like yet another adventure to save the universe under impossible odds (only Ant-Man and Spider-Man: Homecoming seemed to embrace earthbound stakes), but filmmakers like Black, James Gunn, and now Waititi have infused the Marvel template with some much-needed idiosyncracies and personality. Thor, above all Marvel superheroes, has been in need of some retooling. By adding other heroes such as Hulk and Valkyrie, as well as Waititi’s pervasive brand of goofiness, the Thor character feels revitalized, layered, and compelling, arguably for the first time since his introduction in 2011. Watching Thor: Ragnarok, the viewer may not feel as though the material has been elevated beyond the realm of a Midgardian superhero yarn, but Waititi infuses the film with such joy, fun, and candy-colored delight that its effect is energizing. And now that Waititi has proven himself under such conditions, here’s hoping he returns to the more intimate tales that define his best work.