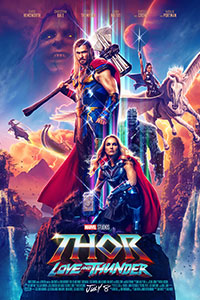 Thor: Love and Thunder raises questions about the delicate balance between a director’s authorship and the overarching boundaries of franchise storytelling. Most multi-film series have a standard set of aesthetic, tonal, and narrative parameters, some more restrictive or liberating than others. Directors can either adhere to the rulebook, write a few new rules, or tear the book up altogether. Conform to the template too closely, and the result functions like an assembly line model, chugging along with precision but with nothing to distinguish it. Lean in the opposite direction, and directors risk alienating viewers devoted to the franchise’s trademarks and continuity. For instance, a common complaint about The Last Jedi (2017) was that writer-director Rian Johnson deviated from the narrow confines established by earlier Star Wars entries. Some celebrated its innovations; others decried its nonconformities. Every time a studio gives a unique filmmaker creative leeway within a franchise, they test the limitations of their brand. For better or worse, the champions of restraining filmmakers within a house style is the Marvel Cinematic Universe, overseen by Kevin Feige. And while distinct voices such as James Gunn and Sam Raimi have managed to work within the Marvel framework and leave their fingerprints, few have pushed the MCU to its edge like Taika Waititi.

The Thor franchise-within-a-franchise has seen filmmakers both adhere to the MCU rulebook and engage in wild experimentation. The result has left the character with an identity crisis and a personality that shifts from one appearance to the next. Kenneth Branagh imbued Thor with Shakespearian classicism and intrigue in the 2011 original. With the 2013 sequel, The Dark World, director Alan Taylor’s workmanlike effort felt like a lifeless product from the MCU assembly line, and Thor felt just as bland. The various Avengers and other crossover movies have made better use of the character. But in Waititi’s Ragnarok from 2017, the New Zealand director applied his idiosyncratic personality to the MCU, and in doing so, transformed the dullest superhero into the most dynamic and playful while still retaining the character’s integrity. In Waititi’s hands, Thor became a blend of godly power and surprising comic turns—all anchored by a charismatic performance by star Chris Hemsworth, who carried his reimagined God of Thunder into Infinity War (2018) and Endgame (2020) for a rousing revival.

For Love and Thunder, the director and co-writer Jennifer Kaytin Robinson flood Waititi-isms into a movie more interested in ironic laughs than furthering the MCU’s mythology or delivering cohesive behaviors. Everything’s awkward humor and performed heroism. Thor’s repeated line—“What a classic Thor adventure!”—hints that the hero is pretending to be something he’s not. That’s the film’s theme, but it’s also true of the film itself. Rather than mine the theme for its existential possibilities, Waititi’s references to ‘80s hair metal and outmoded screaming goat humor distract. All of this is destabilizing because the resident baddie, Gorr the God Butcher, is played by Christian Bale to horrifying effect. The first scene shows a pious Gorr losing his daughter and praying to his golden god for an “eternal reward” for his suffering. When he doesn’t receive it, mysterious shadow forces conveniently supply Gorr with a Necrosword, giving him the power to slay gods. Possessed by darkness and hungry for revenge, Gorr becomes a pale, serpent-like figure with sharpened teeth and yellow eyes, determined to kill all gods across the universe. Bale’s committed performance is scary stuff. 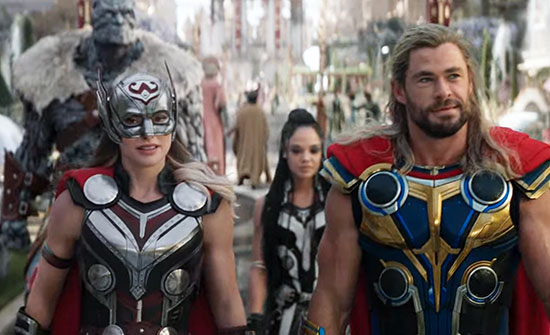 Even so, Waititi deflates Gorr’s potential for dread with everyone else’s persistent quips and unserious attitude. Besides Thor, there’s Valkyrie (Tessa Thompson), the head of the earthbound New Asgard, now a tourist spot. Jane Foster (Natalie Portman) also reappears on the scene after a long absence. Despite some potentially grim and heavy thematic material involving Gorr and Jane, Waititi somehow manages to keep the tone light and airy. His ability to balance heavy subject matter and comedy proved essential to Boy (2010), Hunt for the Wilderpeople (2016), and Jojo Rabbit (2019). But all the silliness and faux confidence for irony’s sake feels misapplied, resulting in an unbalanced two hours that barely resembles the MCU or these characters. And though we should be praising deviations from the MCU norm and embracing filmmakers who are allowed to explore personal flourishes within its system, it’s easier to celebrate those that bend the house style but don’t break it. For instance, various Guardians of the Galaxy and Ant-Man entries successfully blended their distinct humor and heart with superhero stakes. Instead, Waititi seems more invested in doing his own thing in Love and Thunder.

As a Waititi fan, I enjoyed his signature moments of flat-out weirdness and offbeat humor. But as an MCU fan, I questioned whether Waititi was applying his style in the right places. Consider an early scene involving Thor, who fights some random birdlike bandits alongside the Guardians of the Galaxy. The throwaway battle scenes end with Thor and Star-Lord (Chris Pratt) having an awkward goodbye. Somehow, Thor outperforms Star-Lord with his uncomfortable and desperately heroic energy, making Star-Lord the straight man by comparison, which seems uncharacteristic. The timing of certain jokes is another issue. Moments after Gorr attacks New Asgard and steals its children in hopes of prompting a confrontation with Thor, our hero gives a blundering speech that reaches for comedy amid traumatized parents. Elsewhere, a central plot point involves Jane battling Stage 4 cancer. Thor’s old weapon Mjölnir calls to her and gives her the God of Thunder’s power, keeping her cancer away while she wields the reassembled hammer. But even when faced with certain death, there’s no end to the humor, which, generally, can be a way of coping or deflecting. Given how few emotional beats hit their mark in Love and Thunder, the humor feels more like a barrier between the viewer and the narrative stakes than a method of endearing us to them.

Even so, Waititi’s brand of goofiness offers plenty of euphoric highs. A sequence set inside the gods’ Golden Temple, overseen by a bloated, Greek-accented, and orgy-minded Zeus (Russell Crowe), is a ridiculously funny lark. There’s also a riotous stage production in New Asgard involving a familiar troupe of actors. Much of the material involving Korg, Waititi’s strange sidekick character, offers the film some structure—he narrates various amusing montages and, through exposition, establishes Thor’s love-centric arc. Other gags almost derail our goodwill, such as the overreliance on the aforementioned screaming goats, a viral video reference that was funny for a minute about ten years ago. However, there’s a pleasure in seeing these performers let down their guard and conform to Waititi’s style. Thompson and Crowe are clearly having fun, and that’s infectious. Hemsworth and Portman exude awkward ex-lover energy in several uncomfortable interactions that land best when they ditch the uneasiness and embrace their earnest affection. Still, it’s commendable how the MCU gave Waititi $250 million to make what feels like a big-budget version of Terry Jones’ Erik the Viking (1989). And I mean that as a compliment. 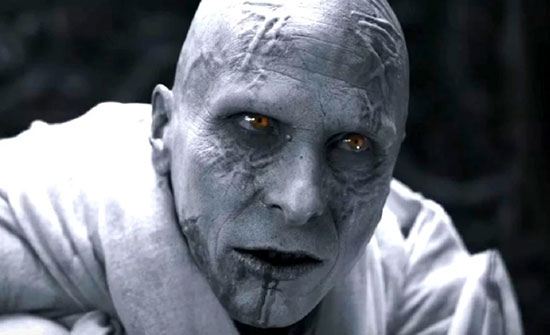 Visually, Love and Thunder pops with album cover imagery and a candy-colored palette. Cinematographer Barry Idoine brings life to a range of CGI spaces, including a spatial phosphorescence on a Bifrost path and a glimmering assembly hall populated by a cornucopia of gods. Even Thor’s new costume looks etched in solid primary reds and blues, making him look like, well, a comic book hero—even more than usual. The standout sequence must be the stark shadow realm rendered in black-and-white with subtle flecks of color, where Gorr looks wraithlike in his white cloak and glowing eyes. If only Bale had more to do in these scenes than look terrifying and exude horrifying glee through his performance. Then again, perhaps that’s enough. When the film finally reaches its climax, the setting recalls the afterlife from The Lovely Bones (2009), and a key character appears in negative space for a dazzling effect. However, the cutting by four credited editors (Matthew Schmidt, Peter S. Elliot, Tim Roche, and Jennifer Vecchiarello) struggles to make sense of the tonal and visual shifts from glib to grave, and as a result, the discordant film wavers over its two-hour runtime. This feels like a much longer film that has been cut down, removing connective tissue in favor of a leaner, funner experience.

Unfortunately, Waititi and Robinson’s script also lacks the mythological clarity of other MCU movies. Love and Thunder is the kind of experience that falls apart in the discussion afterward, where the nitpicks and confusing details compile. For example, why does Thor’s mystical axe, Stormbreaker, suddenly behave like a jealous dog, hilarious though it may be, despite it only being a blunt object in the past? Or consider how Jane becomes what she calls “a Thor” when she wields Mjölnir. She appears in Thor’s armor, cape, and helmet, and her eyes light up with the power of lightning, as Thor’s do. But the idea of becoming “a Thor” suggests that our titular hero isn’t so much an individual named Thor as a temporary occupant. Although Thor has had many identities in the comics, Love and Thunder doesn’t adequately explain this phenomenon for the unversed viewer. Whether Thor is really the God of Thunder, or he’s simply “a Thor” whose root identity changes, I cannot say. To my knowledge as a regular MCU viewer, this is the first MCU hint that someone else could don Thor’s mantle, like Sam Wilson becoming Captain America. In any case, the notion is glossed over, like most aspects of Waititi’s film, in favor of its goofy momentum.

Regardless of some confusing details and messy structure, Love and Thunder delivers a diverting spectacle. Waititi doesn’t deviate from the house style so much that his film no longer feels like an MCU product, but his treatment renders everything onscreen inconsequential. Above all, Waititi’s insistence on humor during almost every scene, save for two or three dramatic moments, is irony run amok. I’m not a person who believes that some subjects should be off-limits for comedy—after all, I enjoyed the director’s Jojo Rabbit, a comedy involving a young member of the Hitler Youth and his relationship with an imaginary Hitler. But I do believe that Waititi’s application of comedy in this instance, specifically the pervasive irony, renders any tragedy, genuine character growth, and investment in the mythology inert. Still, some will love the film’s memeable moments and winking nonchalance. But both the MCU and Waititi have produced better Thor adventures.