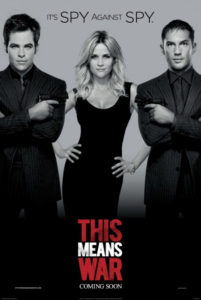 This Means War contains all the superficial requirements to make a movie trailer that sells: a cornball soundtrack, big-name stars, and a playful tone. The good-looking cast includes the formerly-highest-paid-actress in Hollywood, Reese Withersoon, starring opposite Chris Pine (Star Trek) and Tom Hardy (Warrior, also The Dark Knight Rises later this year). This is an attractive bunch, bound to draw audiences. Evidence of romance and action permeate the material, following two fun-loving CIA spies as they compete for the affections of one woman. As she teeter-totters between them, unaware that her beaus know each other, the two men use every tool in their arsenal to thwart the other’s chances. Shootouts, a car chase, and dangerous stunts ensue (here’s yet another Hollywood production where someone leaps from a skyscraper in Hong Kong). And despite these promising qualities, this piece of commercial filmmaking contains few of the requirements to make a good movie.

Almost instantly, during the unintelligibly shot and hastily edited opening action sequence, the promise of the trailer fades. We learn that agents FDR (Pine) and Tuck (Hardy, British accent strangely intact) share an incomparable bromance, even (if not especially) when they’re saving the world from an ambiguous Euro-villain (Til Schweiger). When a botched operation leaves them “grounded” to desk jobs by their ever-nose-thumbing superior (Angela Bassett), the divorcé Tuck decides to spend his time dating through an online service. Enter Lauren (Witherspoon), a successful and single modern professional. Turns out, unbeknownst to her, Lauren’s sex-obsessed best friend Trish (Chelsea Handler) has signed her up for the same dating service. Of course, Tuck and Lauren meet for a brief date and they hit it off. But afterward, by chance, Lauren goes into a video store to rent a movie and there she meets FDR, with whom she eventually connects as well.

It should be noted that during the initial conversation between Lauren and FDR, she calls The Lady Vanishes (1938) one of Hitchcock’s “second tier” films next to his more popular American productions. If it were me, I would have probably debated with her about the film’s merits and, in finding that her judgment of Hitchcock’s oeuvre was poorly argued, avoided the ensuing relationship altogether, which would have saved the audience a lot of grief. Alas, this does not happen. Later we learn that FDR is willing to happily rewatch Titanic, thus his movie tastes aren’t exactly fine-tuned either, so perhaps they deserve each other. Oh, and by the way, are there even video rental stores anymore? Does this movie take place in 2008?

Anyway, the second act is the movie’s most enjoyable period—a half-hour stretch where the spies realize they’re both dating the same woman and make a “gentleman’s agreement” to allow Lauren to choose the better man. Punchy, rapid-fire dialogue and some physical humor between these mates supplies their extreme measures with a few laugh-out-loud moments. That is, until the aforementioned Euro-villain reappears in the final act for an obligatory helping of explosions and car wrecks. Eventually, Lauren discovers that the two men know each other and goes into a defensive But I trusted you! mode, having apparently forgotten that she’s a two-timer. But hey, it’s Reese Witherspoon, so it’s okay. To be sure, the performers complete the tasks required of them: Witherspoon looks cute; Pine is handsome, and raises the limit on his cocky quotient for the role; Hardy, too, is handsome, and gives his character a touch of vulnerability; Handler spews her raunchy stand-up material for a laugh.

The movie comes from a former music video director who bills himself as “McG”—you’ve no doubt seen his products Charlie’s Angels and Terminator: Salvation—and, indeed, writers Simon Kinberg (Mr. & Mrs. Smith) and Timothy Dowling (Just Go with It) deliver a script with about as much substance as a music video. There’s an action scene in a PG-13-rated strip club.  Witherspoon dances around in lounge clothes singing “This Is How We Do It” as her spy-suitors recon her home for intel. There are several “dream dates” within this love triangle, where either man takes her out on some impossibly perfect romantic evening (Lauren never seems to work; she only goes on dates). There’s even one of those scenes that occurs in a lot of romantic comedies, where the characters find a reason to spray each other with water from hoses while they laugh like idiots. And almost everything that happens requires little from actors, except that they look good in the process.

Succeeding not as a romance nor buddy comedy nor an action movie, This Means War reminds us why the romantic comedy has grown more tired than any other commercial genre. We sit through shaky, incomprehensible gunplay and worn-out rom-com tropes until what turns out to be a rather ridiculously unsatisfying conclusion. Lauren has a choice between the two men. In a way, she shouldn’t pick either of them. It would serve them—and her—right. Both men are equally good for her and neither one is absolutely the correct choice, but instead of making a noble decision and not choosing, she picks one, leaving the other with a predictable consolation that nevertheless proves to be of little solace for the audience. This movie is so desperate to please the mainstream that it’s afraid to be different; therefore, it must provide a solution, any solution, just so the viewer’s brain isn’t taxed. Undemanding in the worst ways, the movie’s director and writers have gone to considerable lengths to make this experience as effortless as possible, yet as a result, they make it so very diffucult to endure.