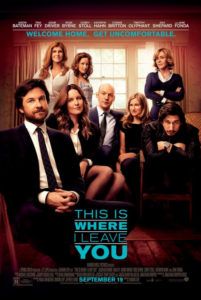 Another family reunion, another opportunity for ridiculous situations. Adapting his own book, author Jonathan Tropper brings This is Where I Leave You to the screen with an air of wackiness that feels overly familiar, like a more comical version of A Christmas Tale. Everything that can go wrong does in this all-star ensemble of fake boobs, sex talk, and potty humor, with a small degree of emotional resonance behind the farce. And without the excellent cast (including Jason Bateman, Rose Byrne, Adam Driver, Tina Fey, Jane Fonda, and Corey Stoll), the clichés might overcome the frequent chuckles throughout. Still, regardless of how formulaic these sitcom situations prove to be, and how everything conveniently works out for most of the characters, it’s a mildly watchable, R-rated, dysfunctional family comedy.

Cuckolded by his boss and wife, Judd Altman (Bateman) soon learns his father has died. He returns to his suburban childhood home for the funeral, where he discovers that his father’s dying wish was for his family to observe the Jewish custom to sit shiva for seven days and work out their respective issues. Household matriarch Hilary (Fonda), an author famous for using her family as inspiration for her best-selling book Cradle & All, announces that Judd and his siblings “are all grounded” for the duration of the week. Sporting a new set of implants and an openness about her late husband’s sexual prowess, Fonda’s say-anything, no-nonsense role is reminiscent of Meryl Streep in August: Osage County, except without the cruel streak. Her openness may embarrass her children, but in defense of her oversharing, she insists, “Secrets are cancer to a family.”

Each family member comes with their own secrets and complications, and almost all are cleanly resolved by the end credits. Judd’s sister Wendy (Tina Fey) has two children and a preoccupied businessman husband, though she remains in love with her affable high school sweetheart (Timothy Olyphant), who was brain-damaged in an accident when they were young. Paul (Stoll), the eldest and most responsible brother, tries to conceive a child with his baby-crazed wife Annie (Kathryn Hahn), who used to date Judd back in the day. The youngest, Phillip (Driver), is a reckless, good-humored black sheep who shows up with a twice-his-age psychiatrist girlfriend (Connie Britton) in tow. And, of course, Judd tries to conceal his wife’s affair from the family and meanwhile falls for a former schoolmate, Penny (Rose Byrne), who still carries a flame for him and represents his chance at a rebound. Judd’s life becomes even more complex when his wife shows up and announces that she’s pregnant with Judd’s baby.

“I don’t do complicated,” explains Judd, and neither does director Shawn Levy, whose previous credits include broad fare like Real Steel and the Night at the Museum series. Levy approaches every sequence like he’s priming us for the kookiness to follow. Take when Annie wakes up Judd in his basement bedroom and demands that he give her the baby that his brother cannot produce. It’s a scene that could have been played out to either emotional or comic effect, but instead, it falls flat and exists only as a lead-in to a climactic row between Judd and Paul, which itself only exists as a lead-in to a larger climax. And if there’s a lull in the comedy, Levy cuts to Wendy’s little boy dropping his pants to use his training potty (which is, admittedly, hilarious). Nevertheless, Bateman’s deadpan routine and Fey’s general amiability keep the viewer distracted from the fact that you’ve seen these situations played out before in better films. Driver, whose character strives for inappropriateness at every turn, manages to muster a few laughs too.

This is Where I Leave You wraps up everyone’s story arcs in a few brief scenes where the substance is airy and the zaniness is pushed to the max, impelled by humor rooted in awkward and uncomfortable circumstances. Secrets are exposed and long-standing conflicts are hashed out in loud, grandstanding fashion, with nary a moment of subtle drama to be found. It’s not above poo-throwing or pot-smoking either. Fortunately, our devotion to the performers compensates for otherwise common situations, leaving the film with a quality that makes it diverting but instantly forgettable. It’s a shame, because there was some real potential with this cast, despite the common scenario of a family calamity drawing people back together. And no matter how many temporary laughs it may produce, by the end, when everything’s wrapped up in a nice little bow, you’re ready to get back to your life and never see these people again.