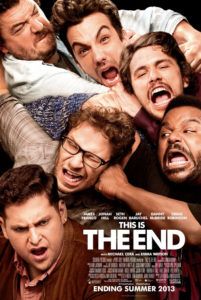 This Is The End begins as a lark that features an ensemble of comic actors who lampoon themselves onscreen. Gradually this summer horror-comedy loses momentum and declines into a disaster-cum-apocalypse genre spoof, using lazy references to known classics for material. The writing and directing team of Evan Goldberg and Seth Rogen have assembled all their friends and called in countless favors to gather names like James Franco, Jay Baruchel, Jonah Hill, Danny McBride, Craig Robinson, and maybe a dozen cameos to appear as hilariously unflattering representations of themselves. In exaggerating their professional image for comic effect, they appear as good sports all and make the most of their chummy improvisational chemistry with one another. Much of the movie goes by with almost nothing of significance happening beyond these actors goofing around together, and this is enjoyable until the formulaic plot takes over and we lose interest.

When Jay Baruchel arrives in Los Angeles to visit his childhood friend Seth Rogen for a boy’s weekend, he has nothing more on his mind than smoking pot, playing video games, eating junk food, and watching 3D movies. But the two buddies have grown apart, Seth having sold out long ago (see The Green Hornet) and Jay more a household face than a name (see The Sorcerer’s Apprentice). Seth is more interested in going to James Franco’s house party than spending time alone with the curmudgeon-y Jay. When the two friends arrive at Franco’s house, the attending slew of Los Angeles types leaves the Canadian Jay feeling left out. Although soon he has no choice but to find safety in the walls of Franco’s fortified mansion, since all at once a huge disturbance destroys the surrounding Hollywood Hills with earthquakes, rampant fire, sink holes, and mysterious blue lights emanating from the sky. Familiar-faced party guests scatter, leaving the aforementioned roster (six in all) seemingly the lone survivors of an apocalypse. Divvying up food and ineffectually preparing for the worst, our heroes bicker and pass their time by taking ecstasy and making a home movie sequel to Pineapple Express.

The aimless, largely improvisational-feeling scenes are priceless, with plenty of in-jokes and winks at the audience about the performers’ off-screen personalities. Always on the minds of our heroes is the question of what caused the apocalypse; the speculated aliens or zombies would have been preferable to the movie’s religious Judgment Day, complete with an army of demonic forces and a light-beam to Heaven for those who repent. The device provides the characters with a foundation, not unlike the undead in Shaun of the Dead, where the human friendships onscreen remain far more compelling than the incidental threat. Here, Rogen plays up his reputation as a stoner, while Franco portrays himself with that weird and artistic energy he’s known for. Hill plays it effeminate and overly generous, but McBride and Robinson don’t stretch their arguable talents. On the sidelines, Michael Cera has a riotously disparaging role as a cocain-sniffing womanizer, while other “names” such as Rihanna, Jason Segel, Paul Rudd, and David Krumholtz appear in brief moments.

The best of these cameos belongs to Emma Watson, better known as Hermione of Harry Potter fame. She arrives at the house several days after the cataclysmic event seeking shelter but instead holds her own with a foul mouth and an ax when she overhears a “rapey” conversation. Franco’s house in the movie is a character unto itself and features paintings he made in honor of his friendship with Rogen, as well as props from his own movies littered about. Inside is also a five-foot-tall penis sculpture, just one of many penis or ejaculate-related visual gags in the movie. Granted, Rogen and Goldberg don’t mine into the inane lows reached in Your Highness, but after the second or third penis reference and watching Rogen drink his own urine, the movie experience begins to grow tiresome. By the time a towering brimstone demon marches through downtown L.A., its member flapping with each step, the viewer has seen enough. A giant-sized creature flattening a city (an impressive effect) recalls the Stay Puft marshmallow man from Ghostbusters, and there are other such intentional references: Hill finds himself raped by a devil in a sequence straight out of Rosemary’s Baby, only to be possessed and later exorcized in a scene ripped directly from The Exorcist.

At times, this mega-meta project feels no more credible than one of those Scary Movie-type abominations, proving all-too-reliant on episodic celebrity cameos, film references, and bawdy humor. Along with these qualities, the religious aspect feels thrown together in the second half to give it all some belated purpose, long after the vain characters have begun to wear on us. Religious absolution becomes an ironically inconsistent plot point, considering that a major theme of This Is The End is how Rogen, Franco, Baruchel, Hill, McBride, and Robinson haven’t been accepted into Heaven due to their self-indulgent Hollywood egos. Indeed, could there be anything more self-indulgent than a movie where a bunch of Hollywood actors get together and make a movie about themselves? Or is this movie just so meta-rich that nothing—not even its own level of satire—should be taken seriously? In either case, with nearly an hour left, the imaginative ideas in This Is The End have run their course and we’re left to realize the filmmakers had a good idea to begin with but barely explored the possibilities.