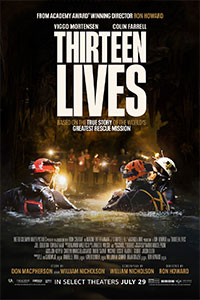 In the four years since 12 young boys and their soccer coach found themselves trapped in Thailand’s flooded Tham Luang Nang Non cave, leading to an arduous rescue effort that lasted 18 days and made international headlines, three films have covered the subject. The first of them, The Cave, came in 2019, written and directed by Thai filmmaker Tom Waller, whose portrait involved many real-life participants engaging in dramatic reenactments. Then came last year’s documentary The Rescue from Elizabeth Chai Vasarhelyi and Jimmy Chin, who also made Free Solo (2018). Given their interest in extreme climbing and the oddballs who pursue the sport professionally, they predictably focused on the independent divers who overcame the impossible task by pushing the limits of their skill. The latest film adaptation, Thirteen Lives, is a Hollywoodized production from director Ron Howard, featuring an all-star cast and impressive production values. As a result, it’s easily the most polished and well-rounded version of the story. But the straightforward approach to the production, combined with the recency of the incident and the previous two film versions, makes the whole affair seem unnecessary.

Thirteen Lives opens like a disaster movie, but instead of a meteor hurtling toward Earth, climate change causes Thailand’s monsoon season to start unseasonably early. The soccer team of mostly anonymous boys and their coach enter “the Great Cave of the Sleeping Lady,” planning a quick visit before they attend a player’s birthday party. Howard dwells on the statue of the reclining goddess outside, creating a sense of foreboding, as though the Sleeping Lady has something in store. After a few hours, the parents worry, the authorities arrive on the scene, and the governor (Sahajak Boonthanakit) warns, “This could be a long night.” When the resident Navy SEAL team cannot perform the extraction, the governor calls Rick Stanton and John Volanthen (Viggo Mortensen and Colin Farrell, respectively), two expert rescue divers. Rick has to be convinced, remarking that “I don’t even like kids,” while John cannot help but think of his own boy during the ensuing effort. These heroes, including subsequent additions played by Joel Edgerton, Paul Gleeson, and Tom Bateman, have at most two dimensions.

Screenwriter William Nicholson, no stranger to writing dramas about daring expeditions under unthinkable conditions (after adapting 2015’s Everest), details the cave rescue with clinical detail. Howard throws digital diagrams onscreen, showing the cavers’ progress and providing temporal readouts that stress the nearly 7-hour journey to reach the soccer team through narrow passages and against rushing currents. Titles also remind us how many days have elapsed. Fortunately, production designer Molly Hughes recreates the cave interiors to convincing effect, and cinematographer Sayombhu Mukdeeprom captures the performers actually diving (many became certified divers for the film) with claustrophobic results. But Thirteen Lives is far from a squirm-inducing thriller, despite the potential for such a reaction. The film seems more interested in the process than the people carrying it out. Not even actors with the presence of Mortensen and Farrell can give these characters as written much depth beyond the occasional irascible remark or worried expression.

The end titles tell us that 5,000 volunteers from 17 countries helped in the rescue effort. And so, Thirteen Lives risks becoming a white savior story by dwelling on the rescue team, which is a similar issue with The Rescue. However, the film has a few modest inclusions that received less attention in the earlier films: the efforts of a water engineer, Thanet Natisri (Nophand Boonyai), who works with a village elder (Chatchawai Kamonsakpitak) to divert the rainwater away from sinkholes on top of the mountain; the valley farmers who agree to sacrifice their crops by taking the irrigated water onto their fields; one concerned mother (Pattrakorn Tungsupakul), whose role is reduced to looking worried and occasionally making impassioned pleas to those in charge. None of these roles prove significant, but their presence creates the illusion that Howard has more on his mind than Westerners saving the day. Most surprising is how little screen time is devoted to the boys, who survived because their coach (Teeradon Supapunpinyo) taught them Buddhist meditation to overcome fear and hunger.

Howard—whose documentary We Feed People from earlier this year tells another, more intimate kind of rescue story—has made this sort of movie before. Thirteen Lives deals with the isolation and problem-solving shown in Apollo 13 (1995), except that film explores its characters and their humanity alongside the technical details of the crisis. Arriving in the wake of two other titles about this subject, Howard’s effort feels redundant and somewhat spiritless, no matter how technically proficient and clear-headed the production may be. Its runtime, almost 45 minutes longer than both other versions, makes the proceedings feel prolonged for drama’s sake, and the film feel overlong and tedious for it. A good disaster film about a real-life event makes us forget that we know the story’s outcome. But Howard’s adequate treatment never convinces the viewer of any real danger. Viewers unversed in the account and unfamiliar with the two earlier screen versions might enjoy Thirteen Lives, but for everyone else, there’s not much new here beyond the appeal of Hollywood production values and movie stars.