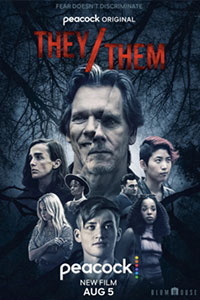 They/Them is the kind of horror movie that’s laughably bad in the first scene and doesn’t improve much in the remaining 90 minutes. In the opening sequence, a woman driving through a stretch of woodland road at night gets a flat tire. When she steps out to check what happened, she’s confronted by a deer rendered by embarrassing CGI, about the quality of a Coca-Cola polar bear. Then, all at once, she realizes someone has placed tire spikes in the road, so she races back to her car, where an axe-wielding maniac emerges from the shadows and butchers her. After this ominous opening that hints at a cabin-in-the-woods slasher, set at a gay conversion camp, things don’t improve much. Think Friday the 13th (1980) meets But I’m a Cheerleader (1999), except less fun and missing the genre’s many pleasures. The promising concept plays out with an unbalanced ratio of 7% slasher horror and 93% soap opera about the inhumanity of gay conversion therapy, and it never brings the integrated premise to its full potential.

Produced by Blumhouse and debuting on the streamer Peacock, the movie marks the directorial debut of John Logan, a name usually associated with Oscar-nominated material. Logan wrote the screenplays for Gladiator (2000), The Aviator (2004), and Hugo (2011), among many other notable films. So why does They/Them (Pronounced “they slash them.” Get it?) feel like a complete misfire? Perhaps now I should mention that his career isn’t all Oscar-worthy; Logan also wrote Star Trek: Nemesis (2002), the abysmal sequel that single-handedly killed The Next Generation series of movies. Here, the writer-director seems committed to portraying gay conversion camps as the vile institutions they are—an admirable cause, to be sure. Still, he forgets to nurture his slasher concept, making the horror elements an afterthought to the rather preachy, albeit important, message about letting young people discover their identities for themselves. Its vital lesson is done a disservice by Logan’s failure to consolidate it within his genre of choice.

When the bus arrives and delivers the latest victims to Whistler Camp, the group meets the camp’s owner, who, at first glance, is hardly the bible-thumping zealot you might expect. Kevin Bacon gives his welcome speech with a calm, reasonable tone, suggesting that he doesn’t have any problem with the LGBTQ+ community and that the week of activities and therapy sessions to follow will be easy. “If you’re happy the way you are, then more power to you,” he tells them. “And let me tell you another thing. God doesn’t hate you.” Whistler’s appeal to their need to feel included preys on the pressure they face from their parents, their desire to belong, and their need to escape what for them feels like a constant struggle for selfhood—and it’s all the more sinister for it. Of course, Whistler’s outward empathy soon reveals itself as a false front; his camp will try to reinforce traditional gender roles through a series of humiliating exercises, extending from a rifle range to a torture chamber to a baking class.

Among the attendees, Jordan (Theo Germane), a nonbinary teen forced to bunk with the boys, is the first to think something’s wrong about Whistler. But most of They/Them’s runtime is spent on the interpersonal relationships of the campers and their cold-blooded counselors—none more chilling than the psychologist (Carrie Preston) who tells Jordan, “No one’s gonna love you, not like this.” The filmmaker establishes a few romantic subplots and bonding scenes amid the campers, including a cringey pseudo-music-video sequence set to Pink’s “Perfect.” Meanwhile, the whole axe-murderer element feels like an afterthought, as though Logan had a conversion camp drama written and Blumhouse insisted on adding a few scenes with a masked killer to the mix. Although Logan implants several unconvincing red herrings, the killer’s identity isn’t exactly difficult to guess. Not that we’re thinking much about the killer at all; most of the runtime goes by without anyone realizing there’s a threat besides the creeps running Whistler Camp.

The young actors give convincing enough performances, suggesting they might fare better in different material. Bacon and Preston prove unnerving and deservedly monstrous. And Anna Chlumsky is absurdly over-the-top as the underdeveloped camp nurse. But Logan’s treatment is achingly banal in its visual style and devoid of suspense, so much so that you might check the time to see how long it’s been since the last time the axe-murderer appeared onscreen. To be fair, a masked killer wasn’t needed; the counselors are villainous enough, making the slasher aspect feel unnurtured. Logan is too busy reinforcing what we already know—that these camps cause irreparable harm and trauma—to deliver a convincing horror movie that leans into the pleasures of the genre. Instead, They/Them feels like an afterschool special that telegraphs its message as though a test will follow, with a pittance of bloodshed paid to horror fans. Although the movie proves inclusive and offers some welcomed LGBTQ+ representation, it also forgets to be a worthwhile horror movie, and it required equal parts of both to succeed.