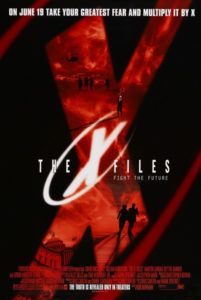 There’s a scene in The X-Files: Fight the Future in which FBI Agent Fox Mulder, played by the dry, oddly engaging David Duchovny, sits mildly drunk at a bar and expresses his woes over fighting the ever-expanding government cover-up of the hidden truth behind extraterrestrials. The bartender raises an eyebrow at his story and then cuts him off. It’s a frank, funny moment that exposes the joyful irrationality and impossible complexity of Chris Carter’s The X-Files television show. And so what if describing the show’s interweaving conspiracies aloud makes Mulder sound ridiculous. Delivered piece by piece via episodes, or in this case, a movie bridging the program’s fifth and sixth seasons, it’s all so entertaining.

Mulder’s lament in the described bar scene comes well into the picture, long after he and his skeptic partner Agent Dana Scully (Gillian Anderson) have barely escaped the (apparent) terrorist bombing of a federal building wherein four died. They’ve since been reprimanded by their superiors, causing Scully to consider leaving her post. You see, despite the film’s title, the X-Files, a two-person subdivision of the FBI that investigates cases of unexplainable paranormal origin, has been disbanded by those high-ups in the government who aspire to keep their secrets secret. Luckily, just before Mulder—always the resolute truth-seeker—gives up, he’s paid a visit by a mysterious conspiracy theorist named Kurtzweil (Martin Landau), who suggests that three of the four victims in the bombing were already dead.

Mulder convinces Scully—herself always the resolute autopsy-performer—to sneak into the government installation housing the bombing victims’ bodies and determine their cause of death, which, as it turns out, was not a result of the blast. Instead, they’re infected with an alien virus—an alien virus that isn’t alien at all, rather the first inhabitant of planet Earth, and the first clue in a conspiracy that will lead to an eventual extraterrestrial takeover by way of gestation in, and then ejection from, a human host (think Alien). But that’s not all. Somehow this connects to bee incubators in the middle of a cornfield, a flying saucer under Antarctica’s ice, and top-secret meetings between characters with names like Cancer Man (played by the chain-smoking William B. Davis) and The Well-Manicured Man (played by John Neville, though there’s never a close-up of his hands).

Series director Rob Bowman leaps television to film quite effortlessly by adopting a cinematic look to his picture. The locales are more extravagantly shot, but they’re no more exotic. Bowman’s task was actually quite difficult, only because the show already expertly depicted action in diverse environments. Several “two-parters” from the series could have easily made excellent films, and Bowman’s product feels like one of those. Consequently, there are a couple of moments in his direction that are mundane from a filmic perspective, but otherwise, they’re familiar for the show’s fans. Isn’t that a problem? Shouldn’t a “based on a TV show” movie distinguish itself from the series? That’s a tricky question because while a director of this kind of movie should embrace their medium, the result shouldn’t feel like a departure from the series. Happily, this doesn’t (though I wouldn’t blame someone for griping that the film plays simply like an extended episode).

From a certain point of view, seeing every episode leading up to this movie, originally in theaters in 1998 at the show’s peak of popularity, is mandatory. Without that background, the double-meanings behind character histories (save for Landau, who plays an all-new character) and every enigmatic line of dialogue are lost. For example, Mulder’s personal stakes are well known; his sister’s abduction and the surrounding cover-up by his father are an established motivation for the show’s viewers. But the movie doesn’t dwell and barely mentions that motivation. It’s a much better experience altogether if you’re an X-Phile. And since few of the dramatic turns are re-defined in the film for new viewers, watching it cold, with little prior knowledge, the effect might lack emotional involvement. It focuses rather squarely on exploiting an almost nonsensical science-fiction yarn. And while the film is exciting, unless you’re a fan of the show, the conclusion, specifically the last scene, might mean nothing to you. The rest, though, remains involving if confusing.

Of course, true to the show’s form, only the die-hard fans are delighted by the film’s revelations. But these are just mere puzzle pieces, which, upon their disclosure, also suggest that the puzzle is much larger than originally believed. That’s the great appeal of the show—it keeps you guessing, thinking you know something when really all you know is a tiny metonym of a vast metaphor. Despite that, when the credits roll, the filmmakers (or show creators) have settled just enough of our curiosity to keep us coming back for more. For this reason, you can’t help but appreciate the show’s popularity from 1993-2002 and the consequent cult following.

Looking back at The X-Files: Fight the Future ten years later, out of the context of a movie linking a season finale and season premiere, the story still holds up as an engaging and even thought-provoking stand-alone, even if that’s not its intended purpose. Carter’s ongoing mythos, born from fanatic suspicion and unanswered questions, contains enough merit to warrant a detached viewing, regardless of the somewhat anticlimactic ending. His are mysteries told using intelligent dialogue and subtle inference, chases, and suspense, versus the actionized spoils of your typical Hollywood alien-centric fluff. For that reason, this is a better-than-average TV-to-film adaptation.