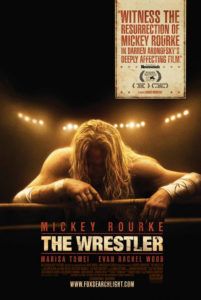 Hearing that Darren Aronofsky’s latest motion picture concerns a washed-up, steroid-shooting professional wrestler attempting to reconcile his life, my first thought was of the many clichés in the logline alone. How strange that the praised filmmaker behind The Fountain and Requiem for a Dream should select such mundane thematic material. But The Wrestler presents one of those rare occasions where the performance of its lead actor outweighs a film’s conventional story. Other such examples occurred with Capote and The Queen, where audiences remember not the impact of the narrative, but rather the way the performer disappeared into their role, embodying it entirely. Mickey Rourke offers such a performance in Aronofsky’s film, written by Robert D. Siegel, former editor of The Onion no less.

For the first several minutes, we don’t see Rourke’s face. Aronofsky follows behind our underdog hero, Randy “The Ram” Robinson, as he makes his way through concrete hallways from his pseudo-dressing room to the ring where his latest bout takes place. Though a star in the 1980s, earning himself a slew of videos, action figures, and even a Nintendo game, he’s now reduced to cheapie weekend matches in school gymnasiums for a cut of the gate. During the week, he unloads foodstuff at his local Acme grocery store for extra cash. And apparently, he needs it; when he returns home, the manager of his trailer park lot has locked him out for nonpayment.

Well-liked within his circle of amateur wrestler friends, Randy clings desperately to what he has, which isn’t much. In vain, he pursues a stripper-with-a-heart-of-gold named Pam (Marisa Tomei), who seeks to escape her lifestyle but won’t blend her work life with her private one. And after a near-fatal heart attack, Randy’s doctor instructs him to stop wrestling. While he heals, Randy attempts to win back the heart of his much-neglected daughter (Evan Rachel Wood). But this glutton for punishment seems only capable of making his life congeal within the ring; everything and everyone else comes secondary, almost to sadomasochistic degrees.

Rourke finds a perfect harmony in this role, as the actor himself has been beaten, and by the looks of him, tragically broken. What remains is not the face audiences remember from Angel Heart or Nine 1/2 Weeks, but a façade crumbled by too many drugs, a brief stint in boxing, poor reconstructive surgery, and time. He’s not only the perfect choice to play The Ram; he simply is this character, heart and soul. With this film, Rourke makes his deserved comeback, as for the last two decades he’s been under the radar, always working, albeit in forgettable roles. Here we see Rourke offering his first real performance since Barfly, and it’s an extraordinary one.

Aronofsky’s presence behind the camera is not invisible, though it’s certainly more recessive than his previous efforts. Shooting with all the subtlety of an affecting docudrama, the director uses intentionally grainy film stock, lousy audio, and shaky images. But that’s only to disguise the more creative aspects of his direction. Consider when Randy, forced to wear a nametag with his real name “Robin,” reports to his new job behind the deli counter. Through the reminiscent concrete hallways, we hear the faint sound of a crowd that isn’t there. When he emerges on stage, there’s no audience cheering him on, only some old women hungry for sliced lunch meat and potato salad.

The Wrestler proves that Darren Aronofsky has more in his bag of tricks than body-mounted cameras, flashy editing, and the momentum of a racehorse, which surprises this critic, since his work has always struck me as obvious, overrated, and derivative. The film proves Rouke has earned the comeback in which he’s currently basking. And it proves once again that the story of a good movie doesn’t always matter—that sometimes it’s about a rare and synchronous coupling of an actor and their role.