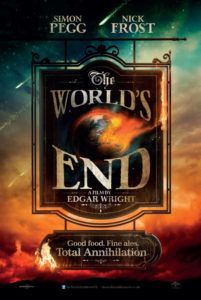 Drawing from the many adaptations of Jack Finney’s 1955 book The Body Snatchers and Ira Levin’s The Stepford Wives, Edgar Wright’s third entry into his “Cornetto series” is a joyous sendoff to the legacy established by his two previous collaborations with Simon Pegg and Nick Frost—Shaun of the Dead (2004) and Hot Fuzz (2007)—his chosen stars since the days of their British TV comedy Spaced. In this supposedly last Cornetto-infused production together, rounding off a splendid trilogy, The World’s End follows its predecessors by adopting an exhausted genre and suffusing it with energy, wit, and technical bravado, but perhaps most importantly, three-dimensional characters whose serious interpersonal relationships extend the cultish material beyond its usual limitations. Although sometimes described merely as genre parodies, Wright’s cycle of films blends wildly entertaining mayhem with polished performances and genius comic timing by some of Britain’s best comic and dramatic actors.

On an unforgettable evening back in 1990, five tightly-knit Brit teens attempted a legendary twelve-stop pub crawl in their sleepy town of Newton Haven. The boys made it most of the way, but after so much drinking, drug use, vomiting, drunken sex, and passing out, they ultimately failed to reach The World’s End, the final stop on the so-named Golden Mile crawl. More than twenty years later now, the boys have grown up and apart. Their self-proclaimed leader, the alcoholic and stuck-in-the-past Gary King (Pegg), has resolved to give the crawl another try. One-by-one, he revisits his former friends and convinces them to finish what they started in 1990. Family man Peter (Eddie Marsan), Bluetooth-eared real estate agent Oliver (Martin Freeman), contractor Steven (Paddy Considine), and stuffy lawyer Andy (Frost) each have bones to pick with Gary—who still dons his black-dyed hair and trench coat from his high-school days. But they agree to go along because they feel sorry for their washed-out, troubled friend, whose arrested development is both tragic and endearing. At the same time, both Gary and Steven pursue a former romantic interest, Oliver’s sister Sam (Rosamund Pike), with varied results.

No one among the bunch is keen on the crawl, and the friends face Gary’s blind enthusiasm for drink and memories by slogging along behind as he skips along and sells each pub like an auctioneer or carnival barker. But inside, Newton Haven’s pubs have become homogenized (or “Starbucked”), looking almost identical and no longer resembling their memory-inflated awesomeness. Moreover, the townspeople seem curiously unresponsive and dull, more so than one would expect from quiet villagers. And at about the midway point in The World’s End, the film takes a shocking, unexpected twist (spoiled by theatrical trailers), the likes of which we haven’t seen since Robert Rodriguez dropped vampires into the middle of his crime movie From Dusk Till Dawn in 1996. All at once, a men’s room scuffle goes bad when Gary knocks off a rowdy teenager’s head, revealing a robot body inside—complete with blue blood, metallic voice, and snap-on appendages like an action doll.

When the others see this, they’re confronted by more replicants, and a brawl breaks out. Stunt coordinator Bradley James Allan turns what one might expect to be the clumsy fighting of British men into hilariously expert martial arts, seemingly inspired by Jackie Chan’s 1978 classic Drunken Master. As a result, the more these friends drink, the better the fights become. Imagine the chubby Frost maneuvering a robot about his body like a ballet dancer, blocking punches and delivering structured blows, or leaping through a window like a ninja. Wright’s penchant for comic timing extends to these carefully coordinated action scenes, the pub brawls playing out like a violent dance splattered with inky goo and robot parts. The Matrix cinematographer Bill Pope delivers clean, textured images courtesy of his 35mm lensing, and editor Paul Machliss assembles the fights with a clarity rarely seen in today’s raucous actioners.

The paranoia worsens as old friends don’t recognize them, while, no doubt from their inebriation, the group doesn’t seem to entirely realize the steady intensification of suspicious glares and crowds following them like something out of John Wyndham’s Village of the Damned. Increasingly smashed and impelled by Gary’s dogged determination to finish the crawl, they continue onward, somewhat inexplicably, and slowly become aware their entire town has been replaced by robots—a term they prefer not to use, its origins meaning “slave”. It’s all part of an elaborate takeover about which too much shouldn’t be said, and while some have been replaced, others willingly joined. Soon the brainwashed townsfolk and robots, including a nice cameo by Pierce Brosnan, engage in an all-out chase, eyes and mouths glowing white-blue, arms outstretched like the screaming things from Philip Kaufman’s Invasion of the Body Snatchers (1978).

Rich with a sly commentary on the inherent conformity driving technology and so-called civilization, The World’s End makes a strong argument for Gary’s conversely self-destructive behavior as characteristically human. Once again, Wright and co-writer Pegg have tapped into not only their genre of choice but into something far more significant. With their ensemble of likable characters played by talented actors—Pegg’s performance as an overconfident wreck remains the obvious standout—the story leads into an epilogue that feels somewhat disconnected from what came before, but the overall experience ends up being everything followers of the “Cornetto trilogy” could have expected. Wright’s brand of fast-paced filmmaking pleases our senses, emotions, and even, in its way, our intellectual needs, delivering the kind of picture only he could make, an homage that feels completely original.