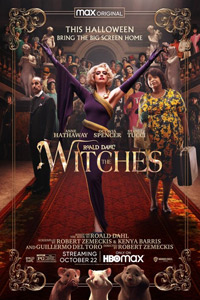 Robert Zemeckis offers a new take on a classic with his latest, an adaptation of Roald Dahl’s children’s book The Witches. Dahl’s mischievous and disturbing tale from 1983 imagined a frightening alternative to the green-skinned, pointy-hatted witches of Halloween decorations. His witches are elegantly dressed ladies who feed poisoned candy to kiddies. They disguise their scratchy bald heads and toeless feet with costumes; underneath, they’re monsters who want to see every child “rrrrubbed out, sqvashed, sqvirted, sqvittered and frrrrittered.” Nicolas Roeg helmed a version of Dahl’s story in 1990 starring Angelica Huston, featuring memorable practical effects from Jim Henson’s workshop, and the sheer terror of that film looms over Zemeckis’ version. But aside from a few inspired alterations to the story’s setting, the movie, debuting on HBOMax, feels like a dull studio product, complete with lifeless CGI and almost admirably unrestrained performances.

Co-writing alongside Guillermo del Toro and Girls Trip (2017) scribe Kenya Barris, Zemeckis takes the British story and relocates it to Alabama in the late-1960s. Chris Rock’s unmistakable voice supplies the narration, warning about the dangers of witches who, because children smell like “poop” to them, delight in turning youngsters into small animals. Our protagonist is played by newcomer Jahzir Kadeem Bruno, who moves in with Grandma (Octavia Spencer) after his parents meet their demise in a car accident. She’s all about tough love, Rock’s voiceover tells us, and she’s also a voodoo priestess on the side. She warns her unnamed grandson about the dangers of witches, one of whom sniffs him out at the local grocery store. And so, she resolves to take him away to a nearby hotel for his protection. Later, they discover that the hotel hosts an annual witch conference, where the Grand High Witch (Anne Hathaway) unveils a plan to turn children into mice by slipping a potion into candy.

Perhaps the most unbelievable part of the movie is when Spencer tells the boy not to worry—they should be safe because the hotel’s inhabitants are usually just rich white people. (After all, rich white people from the South would never harm Black people in the 1960s.) With this, the screenplay misses an opportunity to provide some social or historical significance by not suggesting that a Black woman might be weary of affluent whites in this place and time. Sure, some of the rich people turn out to be witches who transform the boy into a mouse, along with his over-eating friend (Codie-Lei Eastick). And the hotel’s snooty manager (Stanley Tucci, only a touch more inhibited than his performance in The Hunger Games franchise) raises an eyebrow and questions Grandma’s presence in his hotel. But the social reality of the main characters’ race seems to be buried in the subtext beneath feel-good lines like, “It doesn’t matter who you are, or what you look like, as long as someone loves you.”

Elsewhere, Zemeckis offers a few unsettling sights. His movies often force parents to question whether they’re showing their children something too adult. Who Framed Roger Rabbit (1988) may have featured a cartoon rabbit and several Disney characters, but it also told the story of an alcoholic private eye, an animated sexpot, and a murder conspiracy reminiscent of Chinatown (1974). His series of overcooked motion-capture movies in the 2000s—including The Polar Express (2004), Beowulf (2007), and A Christmas Carol (2009)—turned beloved stories into CGI nightmares from the Uncanny Valley. In each case, Zemeckis oversaw animation that looked filtered through a faulty dreamcatcher, distorted and oddly shaped, yet also somehow realistic, as though the warped images from your unconscious mind had been given flesh and blood (and dead eyes). While his take on Dahl’s story resists the temptation to become entirely computer-generated, most of the movie contains some measure of digital imagery that doesn’t quite look right.

Note Hathaway’s monstrous mouth, which opens like a Black Dahlia victim, revealing an angular orifice with sharp, white jack-o-lantern teeth. The concept of witches having scar-like lines across their cheeks that barely conceal their elongated snake mouths is terrifying; the computerized visualization looks silly. She also floats and shoots lightning out of her eyes, effects that never appear scary, just sort of cartoony looking. The most disturbing thing about the Grand High Witch remains Hathaway’s haphazard performance, which seems like she’s trying something new in every scene. Sometimes her accent sounds Russian, other times Swedish or German. (Dahl’s original was probably German to create a historical analogy; the World War II veteran hoped to teach children that any group seeking to eradicate another should be resisted.) Hathaway’s take on the character feels as though anything could happen, but it’s more confusing than blood-curdling.

Pale in comparison to the nightmares conjured by Roeg, this new version of The Witches gives us a few memorable moments. When a witch-rat bites Tucci in the groin, I admit it, I laughed. When the witches reveal their stubby feet, sure, I cringed. I also felt those grandmotherly vibes from Spencer, who’s the best thing about the movie next to her young costar, Bruno. But by the midpoint, when Zemeckis puts forth scenes that bring to mind Mouse Hunt (1997), you begin to ask yourself why this version of the story exists (besides the obvious exploitation of a marketable intellectual property). Zemeckis has made intentionally disturbing-yet-accessible fare before (see Death Becomes Her, 1992), but he seems to lose himself in busy scenes of swooshing camerawork and in-your-face special FX here, leaving the viewer with nothing to savor, and no reason to allow this production a spot in the moviegoer’s memory bank.