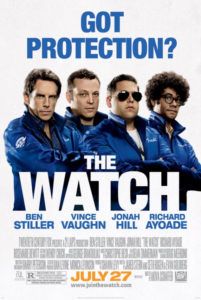 The Watch sounds promising enough. It’s an R-rated summer comedy starring Ben Stiller, Vince Vaughn, and Jonah Hill, about a concerned group of citizens who form a neighborhood watch. While looking after their sleepy Ohio community one night, they discover their town has been infiltrated by extra-terrestrials, and so they fight back to save the world from an alien invasion. With this premise, a script co-written by Seth Rogen and Evan Goldberg (Superbad and Pineapple Express), and a reported price tag upwards of $70 million, one might expect something along the lines of Ghostbusters, or perhaps more accurately Evolution. Even its director, Akiva Shaffer, who, along with Andy Samberg and Jorma Taccone has produced Saturday Night Live’s popular run of ‘SNL Digital Shorts’, holds promise for this material.

But after twenty minutes go by without a single notable laugh, we begin to worry about the grossly unfunny quality of everything onscreen. Our initial worries turn into overwhelming concern when, deep into the second act, the situation hasn’t improved much. And when the movie finally ends, we’re left to realize that we’ve hardly laughed at all. Maybe a slight chuckle or momentary smile, but certainly no audible laughter. You can’t blame the subject matter, even though studio execs at 20th Century Fox opted to abbreviate the original title down from Neighborhood Watch in a pointless attempt to remove any correlation between their comedy and the real-life news story about Florida neighborhood regulator George Zimmerman, who shot the teenager Treyvon Martin. Never do we connect the movie to the real-life incident, but that still leaves us to question why it’s so achingly devoid of laughter.

Disinterest sets in as soon as barefaced product placement hits the screen, which is almost instantly. Stiller plays Evan, the manager of his town’s Costco, in which embeds for Tide detergent and Magnum condoms among other sponsors occupy the frame. After a murder in Evan’s store where the victim is skinned and slimed with green goo, Evan calls for volunteers to form a neighborhood watch. Three aspirants show up: the obnoxious blabbermouth, Bob (Vaughn, who else?), who only joins because he wants a boy’s night out; the emotionally disturbed Franklin (Hill), a wannabe cop; the recently divorced Jamarcus (Richard Ayoade, from Britain’s The IT Crowd). As the boys hunt for aliens, Evan’s home troubles make for uninvolving character development; his wife Abby (Rosemarie DeWitt) wants a baby, but Evan hasn’t the stomach to tell her of his sterility. There’s also a subplot about Bob protecting his daughter from her creepy boyfriend/future date rapist/probable alien.

Though each cast member from the main crew has been hilarious in various other projects, here they’re cast to type, most definitely to a fault. Stiller plays a role similar to the one he played in Tower Heist, the organizer of a wacky bunch of colorful characters assembled to execute his straight-man master plan. Yawn. As suggested, Vaughn plays the endless chatterer. He never seems to stop talking. Even after the movie was over, I could still hear Vaughn’s voice blathering away on one of his improvised rants. Hill’s character is very close to his role in 21 Jump Street, save for some mentally divergent undertones. Ayoade’s nerdy charms go criminally underused. The screenplay instead relies on foul-mouthed antics and pervasive penis jokes to propel the humor, including a gag about the aliens’ green blood having the consistency of semen, while the alien Achilles Heel turns out to be between their legs. It might’ve been funny if it wasn’t trying so hard to be funny.

Male-bonding sessions rooted in beer-drinking, gun-totting, and alien-shooting have never felt so tedious and mind-numbing. Thrown together from a number of red herrings and genre clichés, The Watch somehow takes a talented cast of comedians and reduces them to cheap bodily humor and foul language for an unnecessary R-rating, while a teenage-friendly version may have found an audience given its adolescent sense of humor. As a misguided alternative, the prevalence of F-bombs and porno-talk sounds unbefitting for this small-scale Independence Day fare. The result is rather like a trip to Costco, an experience packaged in bulk without the finesse or charm of your local mom ‘n’ pop general store; except, at this Costco, the shelves are empty yet the lines are long, and the staff never stops shouting obscenities to gain our attention. Eventually, we realize this big, dumb, artificial store has nothing interesting to offer and we go home to shop on Etsy instead.