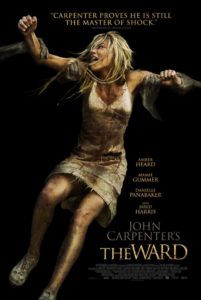 After a ten-year hiatus from the director’s chair, John Carpenter makes his much-anticipated return with The Ward, a spookhouse chiller set in a haunted 1960s-era mental institution. Low-budget and thankfully void of any cheap CGI effects, the film showcases Carpenter’s craft and clarity as a filmmaker, offering one or two satisfying jolts and some eerie set design. But evident is also his unfortunate habit of signing to lousy scripts in the “could’ve-been-great” horror category. As a result, patient fans eagerly awaiting a monumental comeback for the “Master of Horror” will have to keep waiting, since the outcome remains a far cry from Carpenter’s glory days with Escape from New York and Halloween and The Thing.

As the opening titles suggest, Carpenter knows the potential of his setting: Woodcuts and photographs of archaic madhouse practices are shown over the credits, suggesting we’re in for a disturbing ride, and then the images shatter and fragment like glass and move across the screen in slow-motion. But such imagery (hackneyed though it proves to be) is full of promises the screenplay cannot keep. B-movie vixen Amber Heard (Drive Angry 3D and The Stepfather) requested Carpenter take the project, in which she stars as Kristen, a troubled heroine who in the first scene is captured burning down a farmhouse during an inexplicably motivated emotional breakdown. She’s taken to the North Bend Psychiatric Hospital for treatment, and Carpenter establishes the surroundings with brooding shots of dark, empty hallways and perpetual lightning storms flashing outside windows—not unlike the institutional scenes in Carpenter’s In the Mouth of Madness.

Entering Girl, Interrupted territory, Kristen meets the other members of “the ward” (most hospitals have more than one, but apparently not this place). Danielle Panabaker (the slut), Mamie Gummer (the wacko, and also Meryl Streep’s daughter), Lyndsy Fonseca (the artist), and Laura-Leigh (the innocent) are suspicious about the new girl, but form a close enough bond to unite with her against the resident Nurse Ratched and the allegedly “experimental” treatment by Dr. Stringer (Jared Harris). Yet, they’re all more concerned with a ghoul that haunts their ward, slicing up patients one by one. Kristen sees said ghoul in the flesh, green and rotting though it may be, and she begins to suspect something sinister has happened in the hospital to demand retribution from beyond the grave. And so, she makes it her mission to find out.

Although Carpenter’s only credit here is director—on his best works he produced, co-wrote, composed the score, and sometimes appeared in cameo—the screenplay by Michael and Shawn Rasmussen contains plenty of Carpenterisms. For example, a group of protagonists being locked away in restricted surroundings while under siege from an unknown force of evil just about sums up the majority of Carpenter’s works. The Rasmussens don’t make the most of their setting, however, leaving characters like the hospital’s staff decidedly less cruel and evil than they could have been. Also, we’re never quite sure what motivates Kristen, her fiery introduction and hinted backstory all but forgotten as the ghoulish plot kicks in. Likewise, Heard’s performance never goes beyond shouting her desire to escape, shouting her desire for the truth, shouting at the hospital staff, etc. Not that we ever understand why she’s so passionate about these things. Then again, that her character is a thin shell of a protagonist may be the point. (NOTE: Avoid the next paragraph and skip to the last one if you prefer to remain unspoiled.)

Any entertainment value courtesy of Carpenter’s capable direction or the storyline’s mild intrigue is thwarted by the twist ending, a movie cliché better explored in an A-picture like Shutter Island or even a B-movie like Identity. Yes, circumstances are (unfortunately) revealed to be the cause of multiple personality disorder during the last moments, exposing each of the female patients as a personality created when another young girl was kidnapped and repeatedly raped. (You see now why the opening titles were so corny, the fragmentation metaphor bland as can be.) This is a revelation most viewers will see coming, and those who don’t predict it will probably be enraged by its silliness. With this, the slasher-ghoul theme proves pointless and needlessly included, mere fodder for horror fans attending to count dead teenagers. Carpenter can hardly assume full responsibility for the script’s downfalls since he didn’t contribute. But then again, he did insist it be called “John Carpenter’s The Ward”…

As to where The Ward falls in the director’s oeuvre, fans can safely place this disappointment beside Vampires and Village of the Damned as one of Carpenter’s worst. And given its almost unanimously dissatisfied-to-lukewarm reception among critics and audiences alike, the distributors have given it a very limited theatrical release and a half-hearted push on video-on-demand markets, followed by a home video release on DVD and Blu-ray the following month. This is a sad sign for Carpenter, whose longstanding disdain for Hollywood has finally worn down on him, leaving him burnt out on filmmaking, which he openly admits. It shows. Had Carpenter really put forth some creative effort on this project—produced a score, rewritten the script, placed his personal stamp on the production—then the result may have been different. As is, Carpenter has delivered a mediocre horror movie assembled with more composure than most examples from the genre nowadays, but without the smarts this director deserves.