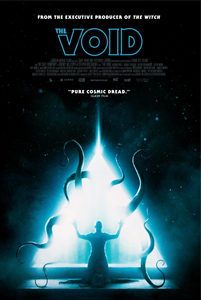 A refreshing change from supernatural specters and slasher remakes, The Void takes a hint from the pages of H.P. Lovecraft to tell a bloody tale of horror. The movie pays tribute to the gory special FX showcases of yesteryear, leaving any description of the story or formal approach shaped by comparisons to other, better titles. Paying homage to 1980s cult classics in this way often results in inspired young filmmakers making a name for themselves, as Adam Wingard’s The Guest or David Robert Mitchell’s It Follows demonstrate. And while the consequence is a series of innovative, albeit derivative movies by new talent, it’s easy to savor the throwback stylings in the face of today’s dull strain of horror movies. The Void fulfills the horror aficionado’s basic drive for nostalgia, but it doesn’t carve out a new place in the genre as Wingard and Mitchell have done.

Formerly part of the Canadian schlock company Astron-6 alongside several other directors (absent here), writer-directors Jeremy Gillespie and Steven Kostanski elevate their approach from gory, self-aware B-movie badness to straightforward horror homage. Their intentionally cheesy titles like Manborg and Father’s Day sought to replicate the same fascination with exploitation titles as Quentin Tarantino and Robert Rodriguez demonstrated in 2007 with Grindhouse. But Gillespie and Kostanski set aside the tongue-in-cheek manner in The Void, instead relying on John Carpenter and Clive Barker to inform their movie about triangle-monogrammed cult members, distorted monsters, and frightening premonitions of a sublime, unknowable force from space or another dimension (or wherever).

Somewhere between Assault on Precinct 13 and Halloween II, the movie opens in a nearly abandoned hospital, where local cop Dan Carter (Aaron Poole) rushes a presumed drunk named James (Evan Stern), who has actually just escaped being murdered by a father-son duo (Daniel Fathers, Mik Byskov). The skeleton crew at the hospital includes Dr. Powell (Kenneth Walsh), a hopeless intern (Ellen Wong), Dan’s estranged wife Allison (Kathleen Munroe), and a couple patients, among them a sickly man and an about-to-burst pregnant woman (Grace Munro). Before long, strange things start to happen around the hospital. White-robed cultists surround the building and attack anyone who steps outside, otherworldly horns sound and seem to reverberate through the building, and inside, people go mad and transform into gut-wrenching creatures with a bloodlust.

Thoughts of Hellraiser come to mind as the hapless victims realize they’re facing something eternal, brought about by the machinations of a local cultist intent on opening a portal to another dimension. At the same time, the wonderful practical makeup used to bring towering, hideous creatures to life brings to mind the days of corn syrup and food coloring, plaster molds, and actual hand-crafted artistry. To be sure, The Void’s utter lack of CGI is refreshing. When the viewer isn’t appreciating the visual and thematic nods to Carpenter’s The Thing and other such fare, the standard character tropes and dull dialogue prove only just distracting. It’s difficult to remain involved in the sort of horror movie where characters enter a dark, creepy room and say, “Smells like a grave in here.”

Having served on the art and makeup departments of studio titles like Suicide Squad and Crimson Peak, Gillespie and Kostanski demonstrate an undeniable control of their craft across several departments, often more aesthetic than narrative. Cinematographer Samy Inayeh supplies elusive lighting to give us a look at the mutated figures, yet preserves their rightful place in the dark. The several credited names to the score provide ‘80s inflections among booming sounds and interdimensional tones, while editor Cam McLauchlin splices brief, random shots of space and unusual cloud formations for an appropriate sense of dread. The outcome is more admirable on technical and conceptual levels than enjoyable, leading to an ending that doesn’t make much sense, but not in the awe-inspiring way that Lovecraft or In the Mouth of Madness could make obscurity haunting. Nevertheless, The Void is competent enough to make the next effort from Gillespie and Kostanski something to anticipate.