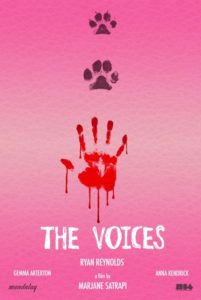 There are some independent movies that don’t deserve to be dumped into the VOD market because they contain elements that, if the studio had marketed them correctly, could have drawn moviegoers into the theater. It’s downright infuriating when a studio under-distributes a great, underseen title. But then there are other movies, like The Voices, that seem tailor-made for VOD, midnight madness screenings, and fantastic fests. They’re just too weird to belong anywhere else. Here’s a horror-comedy about a sympathetic serial killer whose pet cat, Mr. Whiskers, tells him to kill people, and when he does, he keeps the human heads in his refrigerator. And the heads talk to him, keep him company. The setup isn’t exactly a mainstream commercial concept, but the energetic execution will appeal to cult audiences and those with a lurid sense of humor.

Paris-based Iranian director and comic-book author Marjane Satrapi, known best for her impressive 2007 debut Persepolis, helms her first live-action English-language feature with The Voices. Not only is it not in her common tongue, but it’s her first movie not based on a script that she had no part in writing. In that respect, it’s a test for Satrapi’s talent behind the camera—and it’s a test she passes with flying colors. Screenwriter Michael R. Perry, whose notable credits include Paranormal Activity 2 and a lot of television work, delivers a morbid, often hilarious, but also quite often uncomfortable experience that is undeniably entertaining. It’s a mish-mash of tones, ranging from broad comedy to darkly psychological, but Satrapi somehow brings these otherwise unconducive components together. The pleasantly macabre end result was picked up from Sundance in 2014 and distributed by Lionsgate, mostly on VOD, but also into a few arthouse theaters.

Ryan Reynolds plays Jerry, a shy, polite, and genial factory worker in a pink jumpsuit. He lives a quiet life alone in an apartment above an abandoned bowling alley, joined only by his psychotic, Scottish-voiced cat Mr. Whiskers, and his doofy, good-hearted dog Bosco (Reynolds lends the voices for both pets). Lonesome and trying to fit in, he pines after the office hottie, the British tart Fiona (Gemma Arterton), who couldn’t be less interested in him. When he finally gets her on a date one dark and stormy night, he slams into a deer on the road, and his knifey approach to putting the creature out of its misery sends Fiona running into the woods. He panics, kills her, puts her head into his fridge, and her head keeps talking to him. It’s really too bad because he seems like a sweet guy who, as a result of a psychological disorder and some childhood trauma, cannot control his murderous tendencies. And sadly, his motivations are based solely on his fear of being alone.

Next comes Lisa (Anna Kendrick), with whom Jerry may have a real chance at a normal relationship. Watching Jerry and Lisa court is funny and bittersweet. They seem to make a good couple, both of them sugary and sensitive. But it’s also incredibly tragic because we know there’s no way it will work out. Soon enough, Satrapi reveals that we’ve been seeing the world of the movie through Jerry’s eyes (hence the pink jumpsuits). Once his court-appointed psychiatrist (Jacki Weaver) tells him to take his medication, otherwise, she’ll have to inform the police, he starts reluctantly popping pills. Suddenly, Mr. Whiskers and Bosco go silent, and the state of Jerry’s apartment looks like he’s been sharing the space with Jeffrey Dahmer and Ted Bundy. Stacks of garbage and pizza boxes, blood splatter about the walls and countertops, animal feces everywhere, and rotten human heads in the fridge. It’s a real shocker and, for a while, removes the humor from the movie. Despite this, Satrapi and Reynolds never lose our sympathy for Jerry. Only a filmmaker who has absolute control over her movie’s tone could accomplish this.

In this darker-than-dark cartoon-of-a-movie, Reynolds gives a complex performance as Jerry, a guy who at times cannot stop himself from crying, yet always presents himself with a smile. Reynolds is best in indie movies like this, Buried, or The Nines, where he’s actually flexing those acting muscles. The movie hints at Jerry’s disastrous childhood and how it has shaped his adult life, but it also counteracts the trauma with his amiability and outwardly well-meaning nature. And, of course, the humor is based on the several characters in the film that are talking pets and severed heads. The Voices manages to be hilarious, bizarre, disturbing, and even thrilling, sometimes all in the same scene. Coming from the world of comics and animated films, Satrapi has the unique perspective needed to balance out these opposing tones into a unique, unsettling, yet playfully funny experience. Although it seems best suited for the small screen, or in a packed midnight screening where the infectious cackles of fellow morbid moviegoers will remind you that it’s a comedy you’re watching, it’s a pretty darn good one at that.