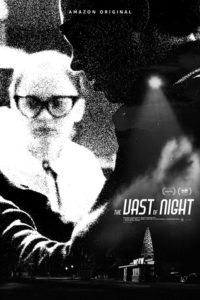 On a tube television with rounded corners, vaguely familiar images flicker on a black-and-white screen. A voice that evokes Rod Serling speaks: “You are entering a realm between clandestine and forgotten, a slipstream caught between channels, the secret museum of mankind, the private library of shadows—all taking place on a stage forged from mysteries and found only on a frequency caught between logic and myth. You are entering ‘Paradox Theater.’” These opening titles of a TV show modeled after The Twilight Zone and The Outer Limits flash on the screen and announce tonight’s episode, called “The Vast of Night.” Thus begins the evening’s entertainment, a slick and efficient work of science-fiction from first-time director Andrew Patterson. But unlike a Hollywood blockbuster teeming with special FX, it’s a modest production that debuted at the 2019 Slamdance Film Festival. What it lacks in eye-popping spectacle it makes up for in immersive scenes of fast-paced, nail-biter dialogue and an impressive formal strategy of long takes and fluid camera movements. Best of all, The Vast of Night sparks the imagination.

The setting is the small town of Cayuga, New Mexico, in the 1950s. Our entry points into this world are Everett (Jake Horowitz), a cocksure radio personality and tech-savvy twentysomething in Buddy Holly glasses. He’s joined by Fay (Sierra McCormick), a 16-year-old switchboard operator with equally distinct cat-eye frames. The first scenes have an Aaron Sorkin walk-and-talk quality. Fay follows Everett around the local school, where a basketball game has drawn most of their town. She has a new gizmo, a tape recorder, and Everett shows her how to use it. The two of them walk to their respective night shifts, chatting about the latest scientific predictions published in Modern Mechanics, from vacuum-tube transportation to “a miniature television screen, and you can keep it in your pocket.” The sheer abundance of ‘50s charm on display, such as vintage cars and costumes, recalls the 1980s nostalgia craze that resulted in Back to the Future (1985) or the opening sequence from Night of the Creeps (1986).

The plot kicks into high gear when, at work, Fay takes a concerning call about something in the sky over a farmhouse. Other callers are disconnected without warning. There’s also a weird sound on the phone line and radio signal. Have the Reds invaded? Are there Little Green Men in the sky? Unsure of what to do, Fay calls Everett at the radio station and ask about the sound’s possible origin. Everett puts the sound on the airwaves, asking listeners if they can identify it. A caller (Bruce Davis) claims he knows the source, and his on-air story leads to more layers of the onion. The screenplay by James Montague and Craig W. Sanger is packed with expositional dialogue. Though any Screenwriting 101 class will tell you to “show not tell,” there’s something so compelling about how Patterson shoots these vivid personal accounts—the camera slowly moves in on a character. The tactic makes us sit at attention. Elsewhere, Patterson merely fades to black, allowing the viewer to focus on the voice alone. However incongruous this may seem for a visual medium, it connects with the viewer. 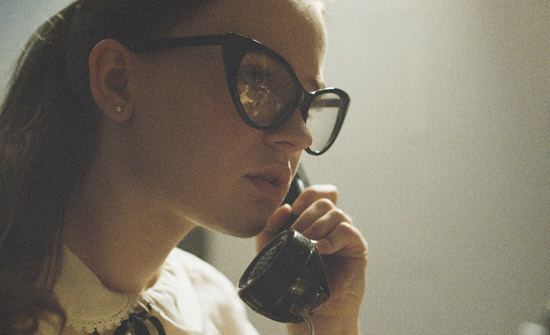 The Vast of Night also blends conspiracy and technology in a manner reminiscent of audiophile thrillers like Francis Ford Coppola’s The Conversation (1974) and Brian De Palma’s Blow Out (1981). Fay and Everett both have some measure of expertise, whether it’s connecting calls on a switchboard or winding and replaying tape. The film doesn’t teach us anything about the equipment per se, but it draws our attention to what is revealed through cords, speakers, or audiotape. Later, the two lug a recorder to another witness, the elderly Mabel (Gail Cronauer), who has an out-there story about her son who disappeared into the sky, and the recording proves important in a subsequent scene. Even on a field mission, technology remains central. Later on, when Fay and Everett begin chasing things in the sky, the story seems less consuming, even though answers are so close. It’s when the characters are entrenched in the intrigue that the film reaches its heights. Not unlike any episode of The Twilight Zone, or the entire 11-season arc of The X-Files, answers are less compelling than a sustained mystery.

Though the film was shot on a shoestring budget, the cinematography by Miguel Ioann Littin Menz has been expertly realized. Since the entire story takes place during one night, the color palette is dark, saturated in browns and digital noise that resembles grain. The sweeping camera movements, particularly in the opening scenes that follow Everett and Fay through a school gym and parking lot, maneuver with impressive composure. The showiest visual unfolds as Fay, at the switchboard, takes a smoke break. In a sustained shot that must have been digitally patched together (though its seams remain invisible), the camera travels across the entire town, through an ongoing basketball game, until it arrives at the radio station with Everett. Although the shot, which is designed to draw attention to itself, was accomplished using a go-kart and some digital trickery, it’s absolutely absorbing. However, the visual pièce de résistance arrives in a ten-minute shot that stays with Fay as she listens to Everett’s broadcast, takes a few disturbing calls, and just begins to realize something major is happening to her small town. It’s the kind of gripping scene that doesn’t call attention to its length until after it’s over.

The Vast of Night harkens back to Steven Spielberg’s Close Encounters of the Third Kind (1977), a film in which characters join forces to solve a mystery with intergalactic implications. The climactic scenes are quite similar to a distracting degree, and when combined with the paranoid titles referenced above, the film’s pastiche quality becomes more evident. Nevertheless, it’s an admirable first effort by Patterson, who makes a screenplay of largely expositional dialogue and modest characterization more persuasive than they initially seem. Fay and Everett have subtle but endearing chemistry, with McCormick and Horowitz giving their roles more than what was written for them. It all has a sneaky way of catching up with you, so when someone shouts, “People are saying there’s something in the sky!” you suddenly feel the contagious excitement. Overall, The Vast of Night is a film of sharp and efficient craft, and its modest pleasures are bound to enthrall those who want to believe.