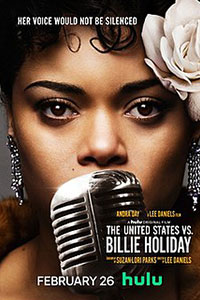 Lee Daniels took Billie Holiday’s song “All of Me” as a challenge. His biopic, The United States vs. Billie Holiday, attempts to wrap every aspect of Lady Day’s life into a single film. Featuring a convincing performance by musician Andra Day in her first significant screen role, the film gives an account of Holiday’s traumatic childhood, struggle with drug addiction, tumultuous romantic relationships, and persecution by the Federal Bureau of Narcotics. It contains the usual narrative blueprint of most biographies about iconic musicians, which has been epitomized (by Walk the Line) and parodied (by Walk Hard) and then reinstated with generic style (by Bohemian Rhapsody). But as the title suggests, there’s a more central focus that Daniels’ film could have and perhaps even intended to take. Instead, it crams too much into just over two hours, giving little of it much depth. Day’s performance and, of course, Holiday’s music remain the center of gravity. Whether they contain enough mass to draw together the meandering story elements depends on how much you’re willing to overlook the package’s overstuffedness.

The screenplay by Pulitzer Prize-winning playwright Suzan-Lori Parks was adapted from “The Hunting of Billie Holiday,” an article by the journalist Johann Hari in his book Chasing The Scream: The First And Last Days Of The War On Drugs. However, Parks and Daniels seem overwhelmed by their subject, unable to choose what to omit and where to focus. Much of the film concerns Holiday’s performances of “Strange Fruit,” her 1939 song that confronts the lynching of Black Americans. Bureau head Harry Anslinger (Garrett Hedlund, playing it pure evil), an anti-narcotics agent who believes Black people and drugs are “a contamination to our civilization,” takes aim at Holiday because of her song, using her heroin addiction as an excuse for persecution. He sends young agent Jimmy Fletcher (Trevante Rhodes), one of the first Black agents in the Bureau, to infiltrate Holiday’s inner circle and gain information that leads to an initial year-long prison sentence. But that’s not enough. Anslinger hounds Holiday for upwards of a decade, bullying her about her romantic relationship with Tallulah Bankhead (Natasha Lyonne) and her performances of “Strange Fruit” that remind America of its true self.

Anslinger’s campaign against Holiday has enough material for an entire movie and enough modern-day sociopolitical relevance as well. In both 1934 and 2020, anti-lynching bills failed to pass in the Senate, suggesting racism still resides at the heart of America, despite claims that say otherwise. Daniels bookends The United States vs. Billie Holiday with informative titles that explain all this, but everything in-between remains a mixed bag of flashbacks-within-flashbacks, dream sequences, drug-addled hallucinations, and typical biographical drama. The film’s inconsistent framing device features Leslie Jordan as fictional radio journalist Reginald Lord Devine, a flamboyant character based on British writer Quentin Crisp. In a 1957 scene, he asks Holiday none-too-subtle questions like, “What’s it like to be a colored woman?” and “Why don’t you just behave?” She tells her story to Devine, though she seems annoyed with him during most of their interview, which brings into question why she’s sharing intimate details of her life with him. Then again, it’s not clear what Holiday shares with Devine and what floats through her memory. Editor Jay Rabinowitz isn’t interested in returning to the Devine-Holiday interview often enough to make the device consistent.

Instead, the film employs a hodgepodge of stylistic transitions, none of them consistent or even logical. Watch how cinematographer Andrew Dunn shoots some scenes like an idyllic memory, some like they’ve been captured on 8mm home video, and some in black-and-white that fades into color. The shifts between these styles are even more baffling, like we’re watching scratchy old footage from the period in a boxy aspect ratio. But who’s capturing this footage, especially the images in a montage that includes love-making between Holiday and Fletcher? Other stylistic oddities include a drug bust sequence that plays at a faster speed like a Benny Hill sketch, though there’s no telling why. Daniels seems to be attempting something akin to Oliver Stone’s visual dynamism in biographical films like The Doors (1991) and Nixon (1995), ignoring that there was a method to Stone’s visual madness. Here, Daniels packs in every impulsive choice, be it related to style or story.

Daniels is no stranger to volatile relationships and sex, unsubtle lessons about civil rights, and portraits of abuse. In a way, The United States vs. Billie Holiday feels like a compilation of traits culled from his Precious (2009), The Paperboy (2012), and The Butler (2013). But rather than feeling like Daniels’ “Greatest Hits” album, the film feels like a lifelessly assembled framework for Day’s performance. Although Day doesn’t much look like the performer, her voice bears an uncanny resemblance to Holiday’s, to the point where one will feel compelled to Google whether that’s really Day or if she’s lip-synching. Granted, Day may be lip-synching, but she’s doing so with her own voice. When Daniels is focused on capturing Day’s acting in all its glory, the film is at its best. Note the single-shot performance of “Strange Fruit” in close-up, or the lingering image of Holiday the first time we see her shoot heroin. Daniels allows Day to embody the character in these moments, setting aside his flashy and inconsistent uses of form.

It must be said that Daniels doesn’t pull away from the most difficult and ugly moments of Holiday’s life. Her self-destructive relationships with men, occasional cruelty, and lingering childhood trauma remain ever-present. However, the sequences that explore these aspects of Holiday’s complex personality feel besides the point of Anslinger’s agenda to stop “Strange Fruit” from being performed. So what we’re left with is a series of heightened scenes backstage, in dressing rooms, in the recording studio, on the road, and in the bedroom—all familiar stuff for a musician biopic. Whereas a more laser-focus account of the Anslinger-Holiday conflict might’ve been a unique approach, Daniels’ film resolves to deliver a familiar package, conforming to the standard biographical structure. Perhaps if the result weren’t such a stylistic and structural mess, we would be able to appreciate Day’s superb performance more and forgive the conventionality of it all. As it is, The United States vs. Billie Holiday remains deeply uneven and unsatisfying.