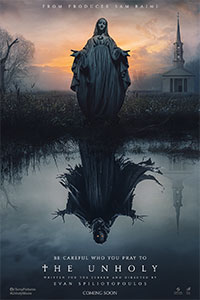 The Unholy is the kind of movie that brings religious extremists out of the woodwork. It takes the idea of Marian apparitions, where the Virgin Mary appears to seers in a display of supposedly divine origin, and turns them into a horror story. Based on the 1983 book Shrine by James Herbert, the screen story follows the media frenzy and religious hysteria after a deaf-mute teen, Alice, played by promising newcomer Cricket Brown, claims that the Christian Mother of God speaks to her. Alice’s story is all the more sensational because she can suddenly hear and speak for the first time, though, quite impossibly, she speaks and even sings with absolute clarity. But it’s a different Mary who has helped Alice, one compelled by Satan. The movie suggests that people who worship these apparitions might be devoting themselves to something false, even Old Scratch himself. In a way, it raises some doubt about the dozens of sites the world over featuring supposedly authentic and “verified” miracles. As the resident priest, Father Hagan (William Sadler), reminds us in a quote from Martin Luther, “Where God builds a church, the devil builds a chapel.”

Even if you’re a person of faith, there’s no point in getting worked up over The Unholy, though many have. The movie feels like a knock-off of better franchises like The Conjuring and Insidious, despite the promising first half. The first shots evoke Mario Bava’s Black Sunday (1960). It’s 1845, and some angry Americans hammer a death mask onto an accused witch. They condemn her soul inside a “kern baby” doll, hang her from a tree, and set her body ablaze. Cut to the present, where disgraced journalist Gerry Fenn, played with charm to spare by Jeffrey Dean Morgan, finds the doll under a tree while investigating a bogus story about mutilated cows. A firm atheist, Gerry smashes the doll for his story, working a local superstition angle. In doing so, he unleashes a wispy presence calling itself Mary, which reveals itself to Alice, restores her senses, and helps her perform healing miracles.

The scenario is Ace in the Hole (1951) meets Saint Maud (2021), but don’t let that get your hopes up. The comparison ends with its plotting. Once a Pulitzer nominee who was ousted for making up stories, Gerry hopes his exclusive on a story with international reach will restore his former glory. He selfishly fuels a media circus around Alice’s ability to help a wheelchair-bound boy walk and cure Father Hagen’s emphysema. Meanwhile, the church’s investigator, Monsignor Delgarde (Diogo Morgado, who has played Jesus more than once), can find no evidence to disprove the miracle. And the local bishop (Cary Elwes) uses the spotlight to sell “Alice Saves” t-shirts and votive candles. But this sort of fervent devotion is precisely what Mary Elnor, the nineteenth-century witch inhabiting Alice, wants. The more dupes who pledge themselves to Alice, the more souls Mary can sentence to Hell.

Screenwriter and first-time director Evan Spiliotopoulos delivers a promising setup, complete with the usual jump scares and creepy specters found in Hollywood supernatural horror. Morgan’s presence does much to convert the viewer; he convincingly plays the resident skeptic of miracles who’s turned into a believer by Alice. But gradually, the setup falls apart. The special effects become distractingly bad. When Mary isn’t whispering to Alice, her apparition dons a hooded cape and hammered-on black mask, beneath which resides a horrifyingly burned face. When the effect is rendered with practical make-up, it looks like something out of Hellraiser (1987). When it’s CGI, it looks like something out of Van Helsing (2004). Horror fans will understand the distinction. Later, Mary ignites a large crucifix and drops it on a victim, but the imagery and editing prove so unclear that we’re unsure what just happened. It’s a shame, too, because cinematographer Craig Wrobleski creates some atmospheric imagery, even if he also resorts to a few goofy “Mary cam” shots from the witch’s perspective.

The script follows the same downward trajectory as the effects with unintentionally funny heavy-handedness in the dialogue. When Gerry’s former colleague reminds him, “You would sell your soul for a story,” he replies, “I think I already did.” The exchange plays like it was engineered for a trailer. Then there’s the overcooked finale. Gerry looks up to the sky and utters a prayer to save a life, and we feel like we’ve entered Pure Flix territory. Still, Spiliotopoulos injects a few notes of cynicism about organized religion with the bishop’s exploitation of Alice and the crowd’s desperate need to believe in something, anything. But any substantive or satirical ideas about how the media and organized religion operate similarly feel underdeveloped in favor of flashy nightmare scenes and the spider-walking ghost-witch. If The Unholy is disappointing for not developing its ideas with any sophistication, it’s downright frustrating for its failure to provide the basic pleasures of a Christian-themed horror movie.