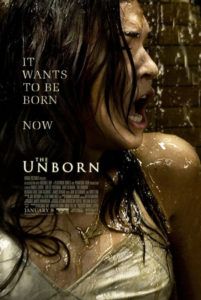 David S. Goyer’s The Unborn mishmashes horror movie concepts you’ve seen before and enjoyed, doing so to nominal effect, neither inspiring pleasure nor hatred but rather shrugged-off dismissal. It’s a movie that doesn’t want you to ask questions, because once you start, they’ll puncture too many holes in the plot. Unfortunately, the inanity of the scenario forces audiences to inquire, with a loudly-shouted accusatory “What?!” aimed right at the screen.

In true ghost movie formula, scary things start happening without delay for seemingly no reason. Yuppie college student Casey Beldon (Odette Yustman) dreams she’s haunted by a young preteen boy (Ethan Cutkosky) with pale blue eyes and a grim complexion. Those dreams begin to manifest into full-fledged hallucinations. Surely it has something to do with her dead mother’s suicide. And unquestionably the fact that her brown eyes are slowly turning blue can’t be good either. Her optometrist tells her the condition is often associated with twins, but she’s an only child… Or is she?

Casey’s dad (James Remar) tells her that in the womb her umbilical cord strangled her unborn brother. So evidently the child’s ghost wants revenge, and he begins possessing people close to her, I guess, because possessing her would mean the movie is over. She jogs a lot, despite being ridiculously skinny and in dire need of some dessert, and splashes a lot of water on her face—both activities result in flashes of freaky children or a dog-with-upside-down-head. The neighbor’s weirdo 4-year-old Matty (Atticus Shaffer, from Hancock) is taken under the ghost’s spell, and occasionally he attacks or says something eerie like “Jumby wants to be born now” whenever the movie needs something to happen. (Note: Her mother’s nickname for the dead twin was “Jumby”, which is somewhere between Gumby and the bodiless floating head Jambi from Pee-wee’s Playhouse.)

So what’s Casey’s problem? Turns out she’s haunted by a dybbuk, a Semitic spirit wandering the planes between worlds. Yarmulke or not, if you’re in its way, you’re toast. This one’s been haunting her family since the Holocaust, beginning with her grandmother, who after surviving Hitler’s genocide finally bites it because of the specter. Bummer. Given the situation, who better for Casey to consult than Rabbi Sendak (Gary Oldman), a willing facilitator of the Jewish exorcism meant to stop the beast from ruining her weekend? Ten people must participate in the ritual, otherwise, the movie has no one to kill.

Humorless in tone, the entirely serious production conducts itself like something spectacular is being shown to us, except most of the film’s tricks branch back to The Exorcist and John Carpenter’s In the Mouth of Madness. Part of the problem is there’s no skeptic; everyone immediately believes Casey is haunted. Shouldn’t someone be laughing off her claims and then suddenly be possessed themselves? Also conspicuously absent are the police, who seem not to care about the dead bodies left behind in Jumby’s reign of terror. Shouldn’t there be a typical movie detective who at first suspects that Casey is behind it all and then, at last, realizes she was telling the truth about her poltergeist?

Goyer’s signatures are superheroes and paranormal apparitions, as indicated by his previous directorial efforts of Blade: Trinity and The Invisible. He’s best when directors like Christopher Nolan or Alex Proyas rein in his imagination, helping him along in the writing process and kicking him out from behind the camera altogether. We’ve learned the hard way that Goyer’s no filmmaker and should be reserved for story input on titles like Batman Begins and Dark City. When he starts to invent on his own, that’s when we’re dealt a muddled and schlocky product like this.

The Unborn’s advertisements make sure to mention that Goyer co-wrote The Dark Knight, but audiences settling down for a screening with those expectations will be sorely disappointed. Even without high hopes, they’ll be dissatisfied. Aside from some genuinely creepy imagery carbon copied from better films, Goyer’s hammy attempt to incite shocks results only in laughs while his story structure causes eye-rolls. On the positive side, we can rest assured Goyer didn’t pilfer his script from an Asian horror flick; so at least Hollywood is coming up with its own bad supernatural horror yarns now.