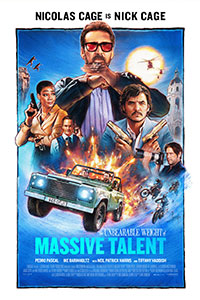 The Unbearable Weight of Massive Talent is about the memeification of Nicolas Cage. The star appears in a self-referential satire about his life and career, playing “Nick Cage,” a fictionalized version of himself. Although struggling for cash, self-centered, and lamenting that his best days lay behind him, Cage’s onscreen persona still has that buttery Californian accent and flamboyant bursts of expressivity. But his personal life goes from four ex-wives to one, and his hair and beard appear dyed to an oddly uniform reddish-brown. Director Tom Gormican and his co-writer Kevin Etten create a portrait of Cage through references—primarily to his shoot-em-ups from the 1990s and a few of his more mainstream roles, including his Oscar-winning bow in Leaving Las Vegas (1995). In addition, the filmmakers remind audiences of Cage’s obscure moments, including his memed “Not the bees!” scene from 2006’s The Wicker Man remake or his bizarre appearance on the talk show “Wogan” to promote Wild at Heart (1990). Yet, the movie has nothing to say about Cage; it feels engineered by fans, for fans, rather than a story that confronts Cage beyond his ironic value. For some viewers, I suppose, watching Cage riff on his celebrity and memeable behavior will be enough.

Whether the movie appeals to you depends on your type of Nicolas Cage fandom. Do you think Cage reached his prime in Michael Bay and John Woo actioners? Do you watch him with fascination over his bizarrely unhinged performances and sharp tonal pitch changes, savoring his raw Caginess in cult movies such as Vampire’s Kiss (1998), Bad Lieutenant: Port of Call New Orleans (2009), or Mandy (2018)? Or maybe you prefer his more serious but no less out-there acting roles in Martin Scorsese’s Bringing Out the Dead (1999), Spike Jonze’s Adaptation. (2002), and last year’s sleeper Pig? Only the latter group may feel underserved by Unbearable, whereas anyone who said “Yes” to some combination of the other categories will find themselves happily diverted by the movie’s embrace of Cage in all his indefinable glory. The question is whether the movie challenges Cage to stretch his “nouveau shamanic acting” technique, and the answer is “No”—Cage never feels like he had to dig deep to play himself. Gormican resists getting inside his subject’s head beyond some conventional screenwriting conflicts. But everyone, Cage included, looks like they’re having fun putting together this lark.

The movie finds Cage at a career plateau, no longer a superstar and struggling to balance his professional and personal lives. His ex-wife (Sharon Horgan) and teenage daughter (Lily Sheen) lament that he’s a narcissistic Hollywood actor, and his agent (Neil Patrick Harris) reports that Cage needs money fast to pay his outstanding hotel bill. Desperate, Cage accepts a gig to appear at a weekend birthday party in Mallorca for an extravagant millionaire named Javi (Pedro Pascal). Although Cage isn’t looking forward to the gig, Cage and Javi nonetheless bond over their shared love of The Cabinet of Dr. Caligary (1920) and Paddington 2 (2017), not to mention Cage himself. In a surreal scene, Javi reveals his collection of Cage memorabilia to the actor, including a life-size statue of his character Castor Troy from Face/Off (1997)—and when Cage comes face-to-face with a statue of himself, he doesn’t have an existential awakening. Rather, he offers to buy it for $20,000. Soon enough, the bromance becomes a game of cat-and-mouse after Cage learns Javi is an arms dealer under CIA surveillance. Two agents (Tiffany Haddish, Ike Barinholtz, both funny) enlist Cage for his greatest role yet—international spy—and turn the self-reflexive satire into an undercooked espionage yarn. 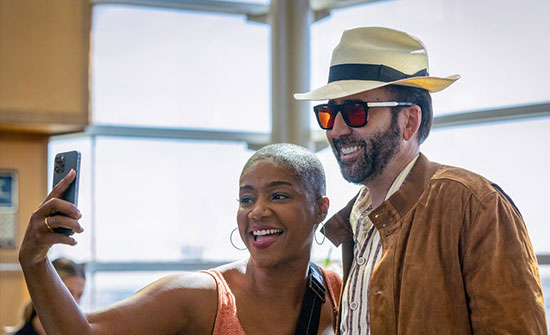 Gormican keeps the proceedings light, avoiding any sense of real danger, just some tongue-in-cheek humor that feels satisfied with itself and its concept. The filmmaker is more interested in crafting another actioner for Cage rather than testing his star’s talent—even if his characters prefer to avoid such fluff. To be sure, despite his CIA assignment to investigate Javi for kidnapping a politician’s daughter, Cage continues to bond with him and even agrees that they should develop a script together. They hope to make a “character-driven” drama in the vein of John Cassavetes, avoiding anything commercial whatsoever. Alas, Gormican does the opposite of his characters’ stated ambition and descends into a dull finale, serving readily marketable and superficial clichés, followed by a final scene in earnest sentimentality. Unbearable borrows this template from JCVD (2008), which found Belgian martial arts actor Jean-Claude Van Damme playing himself and bearing his soul about real-life troubles in several scenes, delivering a wounded character study with an actionized finale. Gormican could have learned a lot from that film.

In the limited subgenre of meta-movies in which actors play themselves, few have done it better than Being John Malkovich (1999). One wonders how much better this movie might have been had Charlie Kaufman written a draft. Still, Gormican and Etten come up with some memorable asides. Take how Cage talks to a younger, wilder version of himself named “Nicky,” dressed in his promotional garb for Wild at Heart. Nicky serves as the, well, uncaged version of the actor, and the self-love on display is hilarious. Nicky’s line after kissing the real version of himself—“Nick Cage smooches good!”—is a perfect example of what this movie needed in bigger doses. I wish Unbearable allowed Cage more unbound moments like this. Elsewhere, he and Pascal have a charming friendship, but aside from a gag about swapping shoes and a cute callback to Paddington 2, there’s not much that stands out beyond the predictable. Ultimately, the movie’s sense of irony is deflated by the script “giving audiences a hook” with the crime story. But Gormican misses that he never needed an action hook to find an audience for Unbearable; most fans just would have been content to see Cage playing himself in a wild performance.

In the end, Unbearable feels like a missed opportunity to create something truly original and memorable to match the indescribable quality of Nicolas Cage—he deserves nothing less. After all, he’s one of our strangest, most authentic, yet most beloved actors. Shouldn’t he have been graced with a film just as weird and unforgettable? Instead, Unbearable’s mild self-awareness doesn’t absolve itself from the script’s by-the-numbers resolution (unlike, say, the end of Adaptation. does), complete with a predictable movie-within-the-movie climax and an oddly misguided finale in which Cage finds a balance between his family and career ambitions. It’s an ungainly note to end on and not entirely appropriate for this star whose legacy on the screen and in celebrity culture could hardly be called balanced. But that’s why we love him. He’s unpredictable. To deliver a stabilized Cage may be endearing, but such sentimentality robs the character and real-life celebrity of his unique and unruly charm. So, when Cage repeats his refrain in the end—“I’m back…Not that I went anywhere”—one can’t help but wonder to whom Cage refers. Himself, or Unbearable’s watered-down, cellophane-packaged Cage fictionalization?