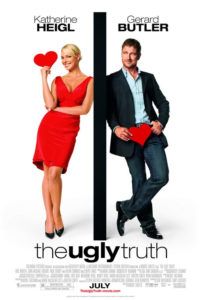 Here’s a contemporary version of Cyrano de Bergerac, updated from the 1897 play by Edmond Rostand to include plenty of modernized jabber on sexual politics and finding The One. It’s called The Ugly Truth, and it stars Katherine Heigl and Gerard Butler as the romantic leads. He’s a misogynist, and she’s a feminist, so they’re seemingly terrible for each other until, inevitably, they’re the perfect match. Butler, who doesn’t believe in love, helps Heigl allure a man she’s after. In the meantime, he falls for her. Of course, they only realize this in the last scenes, when finally they embrace and live happily ever after.

Now that you know everything that happens in the movie, let’s move on to why you’re seeing this. Perhaps you’re like me, and you’re just a romantic at heart who enjoys romantic comedies, no matter how formulaic they’ve become in recent years. Or perhaps you enjoy the eye candy stars. Either way, the chemistry between the two leads makes the movie endurable.

Butler plays a minor-league talk show host whose specialty is “the ugly truth” about relationships. He maintains that men want sex, whereas women have a laundry list of unrealistic characteristics they’re looking for in a partner. In the process of getting together, people change themselves just to find someone, and then, later on, they realize that they have nothing in common because their relationship is based on an act. So why not just behave naturally and get someone that naturally fits The Real You. Makes sense, right?

Heigl’s independent woman character produces a network news program that begrudgingly picks up Butler’s show for a small in-broadcast segment, earning plentiful ratings in the process. Again begrudgingly, Heigl must admit Butler knows what men want and, therefore, how lonely women such as she can wrangle Mr. Right, specifically her dreamy doctor neighbor. Butler helps using a microphone, earpiece, and vibrating underwear. Figure that last one out for yourself.

Written by Nicole Eastman, Karen McCullah Lutz, and Kirsten Smith, the incredibly bawdy and foul-mouthed script treats its female lead without much respect for her womanly strengths. Her character outline better fits a high school ugly duckling storyline. Heigl’s character has zero confidence over her romantic self, dances around like an idiot when elated, is annoyingly anal-retentive, and dwells on girly things precisely because they’re girly, not because her character would actually like them. She claims to have self-respect but then falls for a “man-whore” who regularly sexually harasses her and every other female within sniffing distance. She doesn’t stick to her purpose, and we never really know what she wants. Was this intentional, to paint women as finicky and men as straight-shooters?

Heigl produced the movie, so it’s unlikely she’ll turn on it a few months down the road as she did with Knocked Up after its release. Then again, she has a notorious track record for that sort of thing. She’s an incredibly snotty celebrity, turning on her own work and voicing dissatisfaction with her performances. It doesn’t make her a very appealing star, particularly after she left Grey’s Anatomy and declined an Emmy nomination because she doesn’t care for what she’s taken part in. Perhaps Heigl has put herself into her character from The Ugly Truth, producing a woman who seemingly knows what she wants but doesn’t really know at all.

That the female protagonist succumbs to the wiles of a playboy and admitted manipulator makes the outcome a sad joke, even while giving us that fuzzy rom-com happy ending. What remains constant, even if the characters aren’t, is that everything you expect to happen does. Infuse this safe structure with plenty of dirty dialogue from Butler, and you have a movie that tries for the raunchy-romantic feel of a Judd Apatow production. Everything about it was obviously handed down from another source, and even while realizing that you’ll probably find the result very watchable, if forgettable.