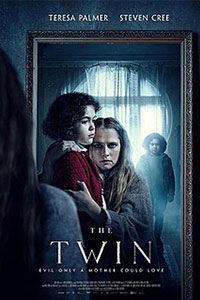 In The Twin, an old Finnish legend claims that, if you put your hand on a prehistoric red ochre hand painting and make a wish, your wish will be granted. When the young Elliot (Tristan Ruggeri) does just that, he wishes for the return of his identical twin brother Nathan, who recently died in a car accident. As spooky behavior ensues, Elliot’s bereaved mother, Rachel (Teresa Palmer), comes to believe Nathan has returned to haunt the family, possibly even to possess Elliot. Or maybe her husband Anthony (Steven Cree), who has moved the family from New York to his Finnish homeland, plans to assimilate her into his Scandinavian cult? Or maybe the pagan locals intend to use Elliot in their Satanic rituals? The movie deploys several horror tropes in its efforts to become the latest “elevated” horror film that uses genre to explore how people process tragedy and grief. Alas, the story features too many misdirections and a twist that strains credibility, leaving the potential emotional impact underserviced.

The setup has possibility. Anthony and Rachel move their family into a comfy, if also elaborate, home in northern Finland after their loss, hoping for a fresh start. But Rachel feels displaced and like an outsider in a community where Anthony feels at home. Once Elliot makes his wish, he begins behaving strangely, playing with what appears to be an imaginary friend named Nathan—but then claims, “I’m not Elliot. I’m Nathan. Elliot’s gone.” Somehow, Anthony seems unconcerned about Elliot’s strange and increasingly disturbing behavior, and so does a local doctor, much to Rachel’s frustration. The scenes with Anthony speaking Finnish go unsubtitled, adding to Rachel’s alienation and sense of persecution. What choice does she have but to believe Helen (Barbara Marten), the local crackpot who alludes to a vast pagan conspiracy? “I’m not crazy,” Helen assures Rachel, “all the others are.” Sounds convincing enough. And so, Rachel sets out to uncover proof that Nathan has returned and the xenophobic townspeople are somehow involved.

Here’s a movie best described in its allusions to other horror movies. Rachel’s paranoia and Anthony’s siding with the locals cannot help but recall the deceptions and betrayals in Rosemary’s Baby (1968), complete with hallucinatory dreams that predict the dangers ahead. When Rachel learns that the pagan locals may be scheming to turn her child into a host for the “Eternal Incubus,” we sense notes of The Omen (1976) and the unholy forces compelling strange things to happen. The film’s Scandinavian setting and ritualized behavior, including a wedding swing and crown of wheat, evoke folk horror imagery most recently explored in Midsommar (2019). Still, drawing from established material isn’t enough to derail a good movie, but only a worthy narrative and substantial characters can overcome the similarities. Unfortunately, The Twin remains so busy making leaps from one vaguely familiar idea to the next that its characters never take hold and pull us through the journey. 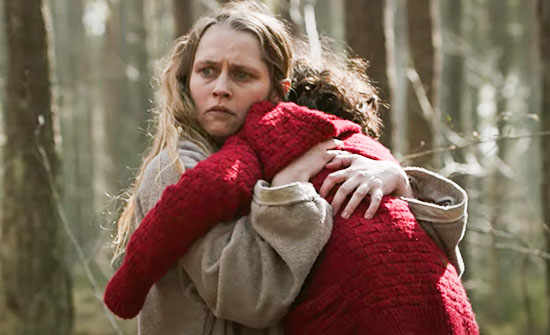 Worst of all, the twist ending robs the movie of any credibility or emotional substance (spoilers to follow; skip to the next paragraph to avoid them). In the last few scenes, Anthony reveals that the two of them never had a twin son. Instead, they had only Nathan, who died in the car accident. Ever since, Rachel has descended into the grief-stricken delusion that Nathan had a twin named Elliot who survived the crash. Similar to The Sixth Sense (1999), it’s the kind of twist that makes the viewer think back to the interactions between characters, judging how well the filmmakers have embedded clues or stuck to the logic of their plot choice throughout. Certainly, The Twin cannot be faulted in this regard. However, the movie spends so much screen time creating false explanations that it forgets to turn Rachel and Anthony into dimensional characters who make the twist an emotional revelation.

The Twin marks the English-language debut of the Finnish filmmaking duo Taneli Mustonen and Aleksi Hyvärinen. Although they share screenplay credit, Mustonen directs and Hyvärinen produces, similar to the distribution of labor on their 2016 slasher Lake Bodom or their 2020 comedy The Renovation. Even if their movie relies too much on its antecedents, cinematographer Daniel Lindholm captures some gorgeous imagery around Tallinn, the capital city of Estonia. Brilliant orange and purple sunsets, afternoon snowfall, and autumnal colors accent the picture, as do the cozy costumes and wood interiors. Setting aside the psychological horror elements, here’s a film that makes you want to wrap yourself in a blanket and drink hot cocoa. Everyone’s layered in warm sweaters and earth-toned colors, and the fireplaces, welcoming interior decoration, and natural beauty of the landscape contrast the horror.

Ultimately, The Twin suffers from a common disorder in modern horror: an overdependence on allusionism. Mustonen and Hyvärinen deliver an intriguing concept and moody atmosphere initially, and Russell gives an admirably committed performance throughout. Still, none of it rings emotionally true because it’s all so familiar, and the filmmakers haven’t done enough to distract us from that. The story has been culled from other movies, no doubt beloved by the filmmakers, and repurposed—and the result feels more like a hollow genre exercise than something personal or unique. None of this should suggest that old ideas cannot be reconfigured in a satisfying or innovative way. Despite their omnipresence in the genre, creepy kids, creaky floorboards, and pagan cultists could all be combined into a winning movie, if given the appropriate treatment. But The Twin plays like a mix-and-match of familiar, marketable horror tropes and not a story that came from the heart.