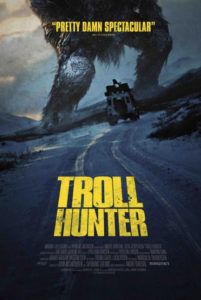 “Found footage” movies. You know the drill: Documentarians set out to find the truth behind some curious happening only to find themselves involved in the excitement. They’re chased, the camera shakes about, and it’s all very exciting until an abrupt finale, when the camera crew apparently dies. Usually in the opening titles, the distributor explains how they managed to get the footage and release it into theaters, where audiences are asked to suspend much disbelief for the sake of some wobbly realism. Filmmakers can employ any number of genres to this model. Alien invasions (Cloverfield), ghost stories (Paranormal Activity), horror movies (The Last Exorcism), and zombies (Diary of the Dead) have all been done, all with basically the same result.

Though restricted by the limitations of its schema, The Troll Hunter has more going for it than your usual “found footage” movie. Shot in a digital vérité style, the camera catching the splendor of Norway’s grandiose landscapes, writer-director André Øvredal’s film manages to outshine others of its kind through the novelty of its subject matter. The Norwegian film, distributed into U.S. arthouse theaters and on video-on-demand by Magnet (the genre division of Magnolia Pictures) deserves a wide release, if only to show young filmmakers how far a shoestring budget of $3 million can get you—given the right locations, an imaginative script, and smart innovations on proven box-office friendly formulas.

Here, a group of three students from Norway’s Volda College—on-camera host Thomas (Glenn Erland Tosterud), female boom mike operator Johanna (Johanna Morck), and anxious cameraman Kalle (Tomas Alf Larsen)—go searching for answers to a local poaching mystery involving a rash of dead bears. The characterizations are nil until we meet the titular character: Mysterious outsider Hans (Otto Jespersen, sending up Robert Shaw in Jaws) could be responsible for poaching, as locals believe, and so Thomas and crew seek him out, following him across the mountainous topography in hopes for an interview. As Hans refuses to speak with them, they follow him into the woods one night, hoping to catch him in the act. All at once, a thunderous roar comes from beyond a line of tall trees. Hans runs from the woods in a frenzy, sees the camera crew, and yells “Troll!” Everyone scatters.

The film crew discovers Hans is not a poacher, rather a government employee of Norway’s Troll Security Service, a classified operation determined to keep the existence of trolls from the public. But Hans has grown weary of his position as a hired hunter-killer, and subversively agrees to bring the crew along to show the public the truth. Because trolls can sniff out Christian blood, he confirms none of the crew are religious (which, of course, one of them denies), and then exposes them to a world of one-to-five story high shaggy beasts with faces like twisted gourds and incomparable body odor. Armed with UV lights, Hans flashes the trolls until they either turn to stone, or explode into a bloody mess. He’s been particularly busy as of late because something has disrupted the troll ecosystem, causing off behavior and random attacks by the normally introverted creatures.

Part of The Troll Hunter’s appeal is that Øvredal doesn’t shy away from showing trolls. In so many “found footage” titles, we struggle with shaky camerawork to catch an extended glimpse of whatever creature or apparition the film crew investigates, be it the Blair Witch or that skinny, awful thing at the finale of Quarantine. While prolonging the appearance of the central monster builds suspense in any monster movie (another Jaws nod), in the end the audience wants to know what face they should give their nightmares. In this case, the trolls are visible enough in long, ponderous shots that allow the viewer to differentiate a Ringlefinch from a Raglefant. Not that these are nightmare-worthy monsters, but their lingering presence onscreen makes for undeniable thrills along the way, leading up to the inevitably disappointing conclusion.

While unstable during chase scenes or moments of panic, Øvredal’s frame, for the most part, resists typical “found footage” unintelligibility and captures some truly arresting scenery from the director’s homeland, all with some minor commentary about preserving our natural wildlife treasures. Indeed, this wholly Norwegian film’s cultural signature is what differentiates it from dozens of others in this subgenre. Øvredal brings together Norse fantasy and video-camera reality into a fast-moving joyride that, filled with as much wonder of discovery as there are thrills, might be compared to a low-budget Jurassic Park. Moreover, it’s original and culturally stamped enough to prevent Hollywood from an Americanization. Unless some young American filmmaker wants to make the Bigfoot equivalent in the Pacific Northwest.