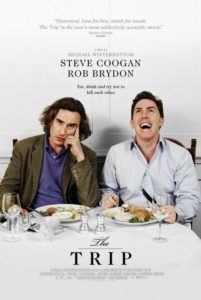 Pieced together from a six-part BBC2 miniseries from 2010, Michael Winterbottom’s The Trip contains elements of documentary, comedy, and contemplative drama. Similar in tone and structure to Winterbottom’s 2005 effort Tristram Shandy: A Cock and Bull Story, that film’s stars, Steve Coogan and Rob Brydon, reunite here in a largely improvised road movie and tour northern England’s finest restaurants. And just like that film, Coogan and Brydon play versions of themselves, but also characters (no doubt and with hope) elaborated upon for comic effect. A showcase for two performers who bring a sense of humor and rumination to the gorgeous scenery on display, the outcome proves deceivingly simple and yet one of the funniest films of recent memory.

When the Observer hires him as a celebrity food critic on a week-long eating tour, Coogan’s plan to bring along his food-savvy girlfriend falls through when she demands a separation. As his third or fourth choice, he invites Brydon, a lesser-known comic performer whose presence makes the self-obsessed Coogan, desperate to involve himself in A-list projects by auteurs, feel superior. At their first hotel, Coogan behaves like a diva when his assistant fails to book Brydon a separate room, forcing them to share a bed. Brydon, whose ego has been curbed by his family life, doesn’t much care about his celebrity—he just wants to entertain. In restaurants, their conversation rarely concerns food, although Winterbottom takes care to showcase the cooks at work preparing their carefully arranged presentations.

Long car rides through winding moors feature conversation and the inevitable bickering that emerges on a road trip. Tangled in an unofficial competition, propelled by Coogan’s insecurities, to determine which of them is the funnier and more talented entertainer, the actors proceed with a riotous back-and-forth debating everything from artistic integrity to their dueling impersonations. Both have a compulsive need to step into character, usually older British actors. As Brydon discusses the evolution of Michael Caine’s voice from his youth to his nasally present state, Coogan volleys back with a superior take. Both renderings are uncanny. Likewise, the two deliver spot-on versions of Sean Connery and Woody Allen, while Brydon has a hilarious Al Pacino. Watching their in-performances only becomes old toward the end of the film, when Coogan’s patience with Brydon has worn out and the two men are ready to return home, expressing their feelings through song with their bravado rendition of ABBA’s “The Winner Takes it All”.

Much as in real life, Coogan’s desperation to become a mainstream leading man leaves him losing roles to Michael Sheen, which he complains about and dwells upon in his long evening walks through empty fields, trying to get reception on his cell. His bad habits, such as sleeping with several hotel employees throughout the course of their voyage, weigh on him as he attempts to move beyond his former party lifestyle, but cannot. Meanwhile, Brydon has soft phone sex with his wife in the voice of Hugh Grant. Coogan’s solitary scenes suggest the Hamlet 2 star has dramatic weight behind him, but his pairing and undeniable, improvisational rapport with Brydon show he’ll always be a comedian at heart (what Brydon calls “the king of understatement”), regardless of his serious-minded aspirations.

More than just a showcase for Coogan and Brydon’s ad-libbing, The Trip features Winterbottom’s appreciation of the English countryside and its literary associations, captured in magnificent shots rarely seen outside of a Brontë Sister or Jane Austen adaptation. Stops at the abodes of philosopher-poets Coleridge and Wordsworth incite many recitations, adding to Coogan’s somber mood and Brydon’s lack of seriousness. Of course, such scenes are punctuated with comedy, such as when Coogan attempts to enjoy a view but instead receives a little poetic justice courtesy of a talkative fellow climber. Filled with moments of poignancy and some of the most riotous moments in any film this year, U.S. audiences may not grasp all the pointedly dry British humor, but those who do will immediately want to seek out the original miniseries for more.