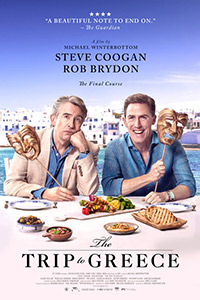 Tragedy and comedy, the icons of suffering and humor, high and low art in Greek theater, epitomize Steve Coogan and Rob Brydon’s fictionalized versions of themselves in The Trip series. It’s almost strange that director Michael Winterbottom hasn’t used this imagery to symbolize them before The Trip to Greece, their latest tour of fine dining and picturesque scenery. Coogan, whose ambition to be seen as a serious actor is sabotaged by his legacy as satiric talk show host Alan Partridge, maintains a beleaguered personal life and a perpetual state of dissatisfaction. Brydon is simpler; he’s a family man and blithe entertainer whose journey always brings him home to a loving wife and children. Coogan remains in a state of existential crisis, no matter how many BAFTAs he’s won. Brydon would be content doing funny voices and impersonations until the end of time. How fitting that Winterbottom draws the parallel between his actors and the sock and buskin for this final installment, which explores the birthplace of theater. Then again, it might be as Coogan observes, “A touch on the nose.”

The films—personal favorites and among the most reliable of any modern franchise—began in 2010 with a BBC2 miniseries called The Trip, which Winterbottom recut into a 2011 film for the U.S. release. The Trip to Italy (2014) and The Trip to Spain (2017) followed, each exploring the same basic idea in a new location: Coogan and Brydon’s many dueling impersonations unfold over fine meals of haute cuisine, and the gorgeous countryside gives way to driving scenes accompanied by impromptu singing. It’s a feast of the eyes and soul, watching these films. They boast the scenery of a travelogue, the foodie appeal of a cooking show, and an endless flow of laughter. Over time, however, their balance of comedy and tragedy has evolved, especially in The Trip to Spain, and now the fourth voyage. The characters have grown more complex, as one should after a long journey. And so it’s appropriate, perhaps also “a touch on the nose,” that their latest adventure finds Coogan and Brydon making the same expedition as Homer’s Odyssey—this series has always used the local culture as a reflector of its characters (Coogan and Brydon were stand-ins for Don Quixote and Sancho Panza in Spain, for instance).

Forgoing any setup, the film opens with our heroes already on their voyage. The Observer has tasked Coogan and Brydon with reviewing restaurants in idyllic locations, from Athens to Lesvos and the Peloponnese. Brydon has agreed, as with their previous assignments, to ghost write the reviews for Coogan, who can’t be bothered. This time, they follow the same path as Odysseus, traveling from Troy (modern-day Turkey) to Ithaca. Aside from Winterbottom’s occasional glimpses into the kitchen, where chefs prepare a variety of seafood and lamb dishes that put the salivary gland into overdrive, Coogan and Brydon remain central. Their conversations include Greek history and mythology, as well as a detour into current politics when the pair give a ride to Kareem Alkabbani, Coogan’s co-star from this year’s Greed. They drop him off at a refugee camp whose exterior looks like a walled prison. Its inhabitants remain there for years at a time—earning a comparison to Greeks who camped outside of Troy for ten years in the Iliad, far too long to be called “camping.”

Most of the table conversation entails Coogan and Brydon trying to make one another laugh or competing for the better impersonation. Though past films have featured their uncanny portrayals of Michael Caine and Tom Hardy’s Bane, the highlights here include Coogan’s Ray Winstone as a cockney Henry VIII and Brydon’s spot-on Dustin Hoffman—not only the actor’s performance in Midnight Cowboy and Marathon Man, but the electric drill from the latter film as well. Of course, none of The Trip films would be complete without several James Bond references or enough “Aha!” callouts to satisfy any Alan Partridge fan. Their discussions always offer a touch of wit and knowingly forced sophistication as well. Brydon reads from Aristotle’s Poetics at one point, and he misunderstands the philosopher’s discussion of “imitation” to hilarious effect.

For every moment of comedy, there’s a touch of tragedy. Brydon’s initial calls home signal his loneliness away from his family, where he receives an unconditional love that his travel partner does not supply. Coogan, meanwhile, begins to feel older, his mortality ever more pressing as he receives updates about his father’s dwindling health. Black-and-white dream sequences reveal how thoroughly Greek culture has saturated the actor’s mind and informed his subconscious. More tellingly, Brydon recounts a story about feeling infantilized as an adult when he was forced to ride in the back seat of his parents’ car. It’s a story shared as a humorous aside, and Coogan, who jealously guards the driver’s seat of their rental, refuses to allow Brydon the wheel for that very reason. But later the imagery of an adult riding in the back has a heartbreaking poignancy.

Even though we’ve been through this routine before with a different backdrop, the chemistry between these two performers never wears thin or overstays its welcome. It’s like getting together with old friends—something most of us cannot manage right now given the COVID-19 pandemic. In that sense, The Trip to Greece is a deeply satisfying experience of escape with a comforting sense of the familiar. Fortunately, after watching these sparring entertainers wander beautiful locations and taste exotic food over four exceedingly entertaining films, the viewer cannot help but feel some measure of growth. Winterbottom, Coogan, and Brydon leave us to appreciate the simple pleasures of food, travel, and humor through the framework of human history and culture. Whether it’s Brydon’s current obsession with Barry Gibb or Coogan weighing the melancholy implications of Homer’s epic poetry on his life, The Trip to Greece has moments of comedy and tragedy that never fail to evoke laughter and contemplation.