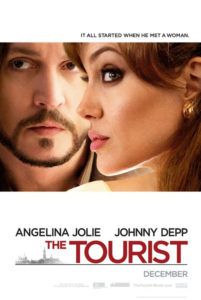 Charm. A necessary element otherwise lacking in The Tourist. This gorgeous and occasionally exciting cavort through Europe stars Johnny Depp and Angelina Jolie, who together have lured millions of moviegoers with their sex appeal, but here perform without a tittle of charm. Director Florian Henckel von Donnersmarck seeks something akin to Alfred Hitchcock’s light, romantic thrillers North by Northwest or To Catch a Thief, which benefitted from the ever-charming presence of Cary Grant and an equally charming leading lady. However the screenplay offers no whimsical dialogue or memorable lines—crucial components to the wanting charm. Instead, plot twists and chase sequences replace any need for cleverness or debonair acting, and the presence of the miscast leads only serves as a constant reminder to audiences how magnetic these roles should have been.

The movie opens with a conspicuous Interpol stakeout shadowing a mysterious femme fatale, Elise (Jolie), at a Parisian café. After receiving a secret message from a man the police are looking for, Elsie follows the message’s instructions and evades her tail on a train to Venice. She’s been asked to choose someone who looks like him—him being her estranged lover, a super-criminal of sorts. You see, whoever he is, he’s had feature-altering surgery to change his appearance, so any man with his size and build might be him. Her choice of Wrong Man is a vacationing Wisconsin-bred math teacher, Frank (Depp), who’s selected by Elise to throw off the authorities, as led by determined Inspector John Acheson (Paul Bettany). When they see Frank with Elise, they assume he’s their man and the chase ensues. Throw revenge-hungry gangsters into the mix, and the plot twists and turns in often predictable-if-preposterous ways.

An absurd plot wouldn’t matter if the screenplay contained airier dialogue, or if the movie boasted more aptly cast leads to begin with. Von Donnersmarck, Christopher McQuarrie (The Usual Suspects), and Julian Fellowes (The Young Victoria) wrote the script, leaving the characterizations to a minimum in place of star power. Their dialogue is filled with meaningless understatement meant to suggest romantic mood, but instead conveys little of anything except staid mannerisms. Underemphasized comic moments come off too dry, whereas a heightened presence of comic banter is just what would-be light entertainment like this needs.

Sadly, Depp and Jolie don’t make up for in personality what the script lacks in character development. At times, the shortage of chemistry onscreen is staggering. Jolie rides on the authority of her pouty lips and low neckline, and never stops taking herself seriously, not for a moment. Maybe she forgets that Grace Kelly and Audrey Hepburn also had a sense of humor. But Jolie is far too busy enjoying the production’s red-carpet gowns and photogenic scenery to let her guard down. As for Depp, he brings little style to the “unlikely hero” archetype, playing his with naïve reservation instead of blind enthusiasm. He’s a quiet, boring math teacher with no sense of style; imagine if he had been a fast-talking ad man like Roger O. Thornhill. Filling the background roles are Timothy Dalton and Rufus Sewell, both in human filler roles.

Von Donnersmarck gathered international recognition after his 2007 film The Lives of Others earned the Oscar for Best Foreign Film, which, in this critic’s opinion, was much undeserved given its narrative comparisons to Francis Ford Coppola’s The Conversation (not to mention that Pan’s Labyrinth was left by the wayside). Von Donnersmarck once again borrows from the greats here, evoking the above-referenced Hitchcock titles or Stanley Donen’s similar Charade. There are scenes on a train that, visually, feel lifted right out of North by Northwest. Yet after enduring this film, one must ask if he were paying attention during his research viewings. Those films breeze by with their comic atmosphere, gorgeous locales, and charming stars, but von Donnersmarck dwells almost entirely on the story, all too confident that his stars will pick up the slack.

Just take a look at the movie poster for some indication as to the lifeless execution of The Tourist. The blown-up heads of Depp and Jolie show vacant expressions, hovering over the minuscule Venice below. Surrounding the stars is white, empty space, as though the filmmakers wanted little else on the moviegoer’s mind than the inclusion of the celebrity talent. But how many more spy movies with Angelina Jolie can viewers tolerate? And how unsatisfying to see Johnny Depp repress the expressiveness that makes his Hunter S. Thompson and Captain Jack Sparrow so enduring. This is unfortunate, because with a dash of humor and some Hitchcock-esque directorial flourishes, the film’s scenario could have been fun. But the production takes the lazy approach and leaves the viewer palpably aware of it.