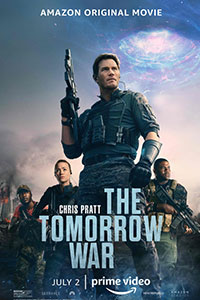 The Tomorrow War plays like the filmmakers started by asking everyone involved to make a list of their favorite science-fiction movies, and then Frankensteined elements from those lists into a vaguely familiar whole. It relies on a few unmistakable antecedents for its biggest moments, while everything else has a quality of exceptional blandness that feels engineered by artificial intelligence to achieve maximum audience satisfaction. If computers started making blockbusters, they would make them like this. Developed by Paramount for something like $200 million and sold to Amazon during the COVID-19 pandemic to help recoup their potential losses, The Tomorrow War features people from today time-traveling 30 years into the future to stop an invasion of alien beasts. There’s plenty of tense monster action and megabudget-style CGI to numb your brain into submission, even in your living room. And while the first half is distracting enough, there’s a point when everything onscreen becomes either a product of embarrassingly bad screenwriting or an homage to a better landmark in the genre, often both.

Chris Pratt, also serving as executive producer, stars as personality-less everyman Dan Forester, a former soldier turned high-school science teacher. He lives a sad-sack existence, unsatisfied by his life, including an enormous McMansion, beautiful wife Emmy (Betty Gilpin, in a thankless housewife role), and bright young daughter Muri (Ryan Kiera Armstrong). “I am meant to do something with my life,” he complains, prompting audible guffaws in my household. But underneath every gesture, you can see Pratt’s goofy expressions or occasional quips brimming inside his milquetoast character, making it seem like Star Lord received a lobotomy. Cue the time-traveling soldiers who interrupt an international soccer game to warn the people of 2022 that, three decades from now, alien creatures have whittled the human race down to a population of 500,000. Therefore, they need soldiers from now to help fight aliens in the future. Dan doesn’t immediately enlist, but when he’s eventually drafted for a 7-day tour, he refuses help from his grizzled Vietnam veteran father (J.K. Simmons), who specializes in hiding people from their government, and reports for duty, despite the survival rate being something like 20%.

Zach Dean’s screenplay avoids most of the time-travel genre’s confusion, initially anyway, with a simple explanation that “time is a river,” and they can leap back and forth between two rafts that keep moving on that river. Once you accept that novel logic, The Tomorrow War begins to unfold with some intense action setups. Dan and a squad of others, including a comic relief tech whiz played by Sam Richardson, receive a crash course in weapons training before getting sucked into a purple sky hole to 2051. They’re dropped, due to some error, from hundreds of feet up onto a Miami rooftop. Most of them die in the fall. (And though we’re told the world’s governments band together to conscribe thousands of capable people into service in the future—all those enlisted were going to die between then and now anyway—the movie is a beacon of American exceptionalism.) The survivors follow Dan into a relentless firefight with anonymous CGI monsters called “white spikes,” which have blood-soaked mouths and shoot toothlike projectiles from wispy tendrils. It’s around this time that the comparisons to Edge of Tomorrow (2014) start to feel oppressive. 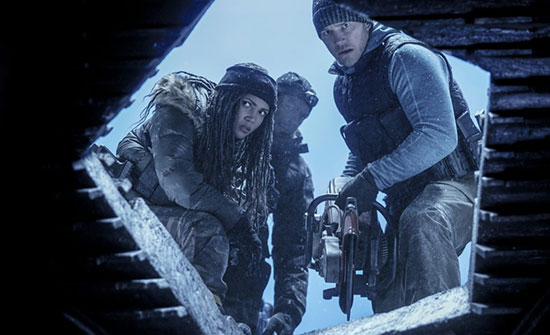 About halfway through The Tomorrow War, director Chris McKay (The LEGO Batman Movie, 2017) turns the proceedings into a checklist of movie references, and the writing takes a sharp turn into frustratingly formulaic territory. The mindless aliens take orders from a queen (think Aliens, 1985), who’s tougher and meaner than her male drones. Dan must work through a couple of science montages with his future daughter (Yvonne Strahovski) to find a compound that can kill the queen, while they also grapple with some underdeveloped family drama. But the aliens raid the future base, leading to a confrontation between the queen and Dan on a fiery platform (Aliens again). Then he’s tasked with returning to his present to stop the aliens from there, so he enlists the help of his father and a few others to save the world. Though, he cornily insists, “I’m just trying to save my daughter. If I have to save the world to do it, then so be it.” They fly to a wintry location in Russia to find a spaceship buried beneath the ice (think The Thing, 1982). Only, they discover the aliens are a bio-weapon engineered by a different species (think Alien, 1978, with a touch of Prometheus, 2012).

After saving the world, that seemingly elegant time-travel logic raises a lot of questions. If they could have stopped the aliens in 2022 all along, didn’t the people who fought the “tomorrow war” give up the remainder of their lives rather pointlessly? Wouldn’t humanity have been better served by present-day scientists taking what the future soldiers know about the aliens and trying to prevent the attack in the first place? Instead, they cut short the lives of hundreds of thousands of people who could have been saved by preventative action rather than enlisting in Operation: Human Shield. These questions remind us that few movies do time travel well, and The Tomorrow War doesn’t raise the bar. But it’s not trying to create a thoughtful set of rules, like Rian Johnson’s Looper (2012) or even Christopher Nolan’s meticulous-if-emotionless Tenet (2020). The filmmakers are more interested in engineering a popcorn-munching extravaganza from the genre classics that inspired them.

There’s a precise moment where my assessment of The Tomorrow War turned from passably stupid entertainment into utter disdain. Early in the movie, Dan teaches a science class and tries to engage his students. One of them, Martin (Seth Schenall), is obsessed with volcanoes. Screenwriting 101 suggests we must return to Martin later on, and sure enough, Dan returns from the future and needs Martin’s help. He’s working with his team to figure out why there’s ancient volcanic ash residue under the aliens’ claws. To discover why, he doesn’t go to a military scientist or even the internet—he consults Martin in an outrageously dumb scene. Sure, the scene explains that the aliens have been here for thousands of years, frozen in a glacier. Sure, the moment underscores how quickly glaciers are melting due to global warming. But it’s a moment (drawn from Jurassic Park, 1993) that captures the generic quality of everything that happens in this movie. The Tomorrow War is an expensive production without any ideas of its own and without the creativity to recycle others’ ideas compellingly. Although it’s refreshing to see a studio invest in a big-budget production that isn’t a sequel, spinoff, or based on some established intellectual property, this is cloyingly familiar paint-by-numbers filmmaking.