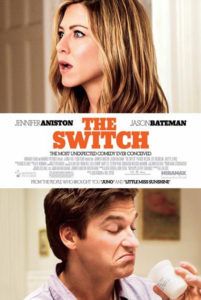 A romantic comedy from Josh Gordon and Will Speck, the directors of Blades of Glory, doesn’t sound like a good thing. Yet The Switch is light and enjoyable, even if much of the movie is wasted on star Jennifer Aniston, whose status as a movie star is grossly overrated. Luckily, Jason Bateman makes the experience worthwhile by tendering a humorous, even three-dimensional performance with a surprisingly dramatic undercurrent. And even if this isn’t a particularly romantic rom-com, there’s at least one emotionally substantial storyline to give the production some purpose.

When Kassie (Aniston) tells her best friend Wally (Bateman) that she wants a baby, he doesn’t realize that she means now, with a sperm donor. Wally is too timid and neurotic to tell her that he loves her, but if he wasn’t so nervous, there wouldn’t be a movie. So Kassie finds her sperm donor in Roland (Patrick Wilson), who donates because he needs the money. Feeling sorry for himself over the situation, Wally gets far too drunk and replaces Roland’s sperm with his own. He gets so drunk, in fact, that he doesn’t remember making “the switch” until seven years later, when Kassie makes a return into Wally’s life with her six-year-old son, Sebastian (Thomas Robinson). Wally and Sebastian have an undeniable bond, as both are phobic, anxious people, whereas the boy has nothing in common with the newly single Roland, who Kassie is now dating. Feelings are concealed until, in typical romantic comedy formula, Wally bares his soul in front of a crowd of witnesses, making a scene in the way these movies require.

Aniston once again proves that she’s a made-for-TV celebrity. She hasn’t had a bona-fide hit in years, and garbage like this year’s The Bounty Hunter isn’t helping matters. Her rather invisible presence onscreen is made all the more transparent thanks to Bateman, who offers some surprisingly dramatic turns as the movie’s leading man. He fills his role with the dry wit and hilarious sarcasm that’s become his signature, whereas Aniston is merely there to facilitate Bateman’s character with someone to pine after. There’s never a moment where we believe there could be a romance between the two. Stealing the show, however, is young Thomas Robinson, whose ridiculously cute portrayal of the neurotic and vulnerable Sebastian is far more believable than Aniston’s character. We believe every moment of father-son bonding between Robinson and Bateman—it’s the heart of the whole movie.

In the background are your typical romantic comedy friend roles. Kassie’s best friend is an obnoxious Juliette Lewis, playing a loud bitchy role, as only Lewis can, that serves no purpose to the story. Jeff Goldblum appears as Wally’s seen-it-all friend who gives the best advice and is always there. Goldblum doesn’t really act, though, as much as he offers the movie a hearty dose of Jeff Goldblum. Almost never a bad thing. As the chiseled jock love interest, Wilson plays a part he’s suited for, but better than. These roles are all formula characters in a romantic comedy, and while Lewis could have easily been altogether absent, Goldblum makes the movie better with every corny line of counsel.

The only impassioned complaint to make is the needless bookmarked narration, which preaches about the meaning of the phrase “the human race”. Bateman reads some Hallmark card hogwash about people rushing in their busy daily lives, and how the human race is indeed racing to find connections. But maybe, just maybe, the human race isn’t a race at all… Such nonsensical, faux-poetic dribble never felt so meaningless to the movie it surrounds. Maybe there is an obvious message about slowing down and looking at what’s right in front of you, but does today’s audience need such a clear-cut metaphor spelled out for them?

This review may read like a laundry list of complaints. Surely The Switch has its problems, namely in the female cast. Lewis is just plain annoying. And Aniston, as star and credited executive producer, has little to no sparks with anyone onscreen. What makes the movie watchable, even a small joy, are the scenes between Bateman and Robinson. They’re so heartwarming and funny that the movie’s remaining problems don’t seem to matter. Though flawed, The Switch is worth enduring Aniston’s uneven performance for Bateman’s first emotionally tangible role as a leading man.