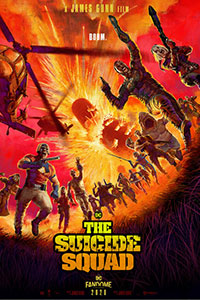 With The Suicide Squad, James Gunn blends his earlier sensibilities into a pitch-perfect summation of his work to this point. Although rooted in absurdist, exploitative horror from his origins writing for Troma Entertainment to his 2006 directorial debut, Slither, a goopfest about space slugs that turn small-town residents into hive-mind zombies, Gunn has since moved on to superheroes. First, he made the hilariously grounded Super in 2009, featuring Rainn Wilson as a vigilante in a homemade costume who caves in criminal skulls with a large wrench. Now Gunn’s name is synonymous with the MCU’s Guardians of the Galaxy sub-franchise, about a band of misfits, creatures, and killers who form a makeshift hero family. Combine his penchant for grotesque, over-the-top body horror with his affinity for unlikely and self-aware underdog heroes, and you’ve got the formula for Gunn’s approach to The Suicide Squad, the sequel/remake thing following David Aver’s messy, forgettable Suicide Squad from 2016.

In my review, I described Ayer’s take as “DC’s version of Guardians of the Galaxy.” That’s even more apparent with Gunn at the helm. After Marvel fired him for some offensive tweets, Gunn went to the other side to help Warner Bros. revive their failing intellectual property. It didn’t take long for Marvel to realize they had made a mistake, and they hired Gunn back for 2023’s Guardians of the Galaxy Vol. 3. Though, they found themselves forced to wait for Gunn to finish his take on the Suicide Squad series, conceived by DC Comics writer John Ostrander. Fortunately, Gunn negotiated a hard-R rating for The Suicide Squad (Ayer was limited to PG-13), which allows the filmmaker to explore the grim concept along with his taste for outrageously gory exploits, foul-mouthed fun, and out-there science fiction. His movie’s place in the ever-disengaged DCEU remains fuzzy. But it’s easily the best and most purely entertaining entry in Warner’s recent superhero fare, inching just ahead of Birds of Prey (2020), Wonder Woman (2016), and Shazam! (2019).

At first, Gunn doesn’t bother introducing his characters beyond a tidbit about their powers. He plunges the viewer into immediate action, eliminating much of the team in bloody fashion (imploding faces, melting flesh, exploding torsos, etc.) before presenting the final ragtag roster. And the eventual team dynamic feels distractingly borrowed: Bloodsport is the reluctant leader; King Shark takes the place of Groot’s mixture of innocence, power, and monosyllabic charm; Ratcatcher 2 provides the heart with her derelict backstory; Harley Quinn’s zany criminality recalls Rocket Raccoon. It’s all vaguely familiar to Guardians, but the pacing and performances keep us from dwelling on its familiarity. The outliers, such as the running gag around Polka-Dot Man’s mommy issues, which manifest in hilarious, Norman Bates-style ways, supply well-earned payoffs. Gunn especially makes good use of Elba, who rarely gets a chance to play the sturdy leading man. Here, his character’s backstory—involving an estranged daughter (Storm Reid) and some self-doubt—lead to a dimensionality enhanced by the actor’s sheer screen presence. 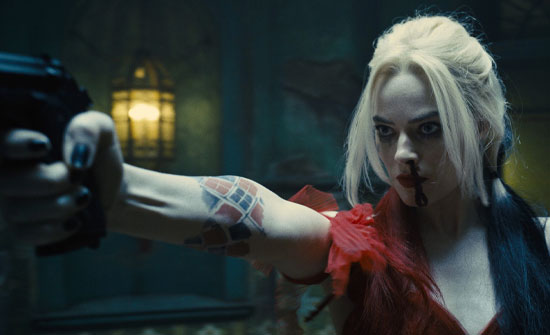 Their mission, which Waller forces them to accept, entails sneaking onto Corto Maltese, a fictional South American island nation, and stopping something called Project Starfish—a top-secret experiment overseen by spark-plug-brained mad scientist The Thinker (Peter Capaldi). It turns out the local government wants to use a giant alien starfish, called Starro, to hatch some evil plan, the details of which remain muddy. Peripherally, Alice Braga plays a revolutionary determined to overthrow the corrupt, fascistic government, but her victory, aided by the Suicide Squad, seems tertiary after the supervillain team and alien starfish plotlines. In any case, Starro supplies Gunn with a chance to revisit Slither territory, complete with Starro’s slimy mini-Starro facehuggers that attach themselves to bystanders, turning them into drones controlled by the towering, one-eyed kaiju. Watching the movie, you get the sense that Gunn’s interests haven’t grown all that much, even though his budgets have gone from about $15 million to $200 million. As a fan, this isn’t a criticism so much as an observation.

Elsewhere, Gunn’s screenplay feels like he was working through some anger about Marvel, Donald Trump, and American history. Gunn doesn’t hold back the bloodshed, morbidly splaying and splattering bodies to comic effect, free from the MCU’s house style and restrictive rating. (If you can’t laugh at someone’s body liquifying when Starro throws them against a wall, when can you laugh?) Gunn’s dark streak extends to Peacemaker, the America-first enthusiast who believes in peace and liberty, “no matter the body count.” Cena fits nicely into the dumb brute whose paranoia and suspicion of otherness clocks as characteristic of Trump’s America; no wonder he ends up becoming a villain. But the movie’s true baddie isn’t Peacemaker or even Starro; it’s another American exceptionalist, Waller, who’s willing to blackmail Bloodsport by threatening to imprison his teenage daughter if he refuses the assignment. Worse, the mission doesn’t follow a save-the-world agenda but instead reflects U.S. foreign policy throughout history. Waller’s interest isn’t saving humanity so much as saving America’s ass.

Visually, Gunn has the freedom to inject a few punkish flourishes compared to his pictorially standardized Marvel work, even though The Suicide Squad ends up looking quite common at times. In a typical blockbuster format, its characters constantly run from falling buildings and tentacles and explosions, usually rendered with average-looking CGI. The material works best when Gunn allows his team members to be their very weird selves, full of disturbing instincts, off-beat humor, and violent impulses—a delightfully macabre combination. Gunn also writes every main character a scene or two of intended emotional heft. But when the movie’s marketing strategy relies on celebrating their high mortality rate (“They’re dying to save the world”), it hardly promotes the viewer’s attachment. Early on, it’s like watching a superhero geek show. Still, The Suicide Squad offers plenty of laughs, shocks, and action to entertain, along with some mouthfuls of popcorn. But in Gunn’s body of work, Guardians of the Galaxy and its sequel have a bit more heart, Slither better celebrates slime cinema, and Super feels more unhinged.